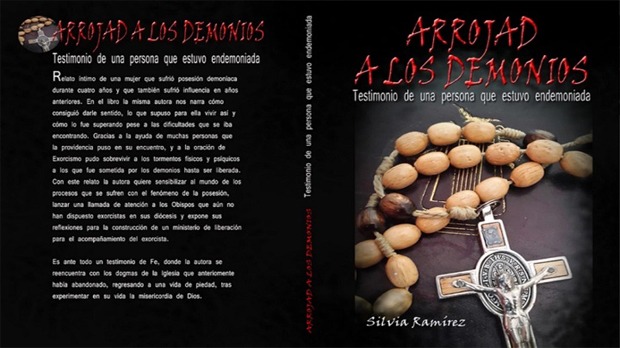 Interview of the Aleteia portal with the Spanish Silvia Ramírez who captured her dramatic experience in a book, worthy of a horror movie, but at the same time full of hope: “When I was worse, I experienced great mercy”

It is not usual to find the testimony of a possessed person. In some cases because of shame; in others due to the pain of the trauma experienced; perhaps also because of the fear of being judged, of being the object of ridicule or social contempt, in a world that believes less and less in the devil, the truth is that the existing cases usually opt for silence.

That is why it is relevant testimony of Silvia Ramírez, published in this chronicle of the portal Aleteia and that she herself already captured in her book ‘Cast out the demons. Testimony of a person who was possessed‘ (which can be downloaded from his personal blog Cast out the demons).

Silvia Ramírez has been living a normal life for several years now, once again integrated into the Church. In this time she has never stopped telling her experience where she has been claimed. One of its last places was the Círculo de Espiritualidad de Valladolid, dependent on the Archbishopric, where Aleteia was able to talk to her.

“I have had the experience that the devil does exist; I have been possessed and God has helped me to free myself”, she assures Aleteia. Because his is, above all, a testimony of hope. “In the midst of everything that was happening to me, I experienced a very great mercy from God.”

Often episodes of demonic influence or possession are related to illness or psychological problems. It is usually the main argument used to deny, or cover up, those phenomena that are beyond our understanding. But it is not the case of Silvia Ramírez. “As soon as I started feeling strange things, I went to the doctor. Throughout these years I have had three psychiatric diagnoses and they have only detected attention deficit”, a problem unrelated to what happened to him.

“You can believe what you want, but there are realities that exist, even if we don’t see them at first sight. Diabolical infections and possessions follow observable patterns, there is a phenomenology that allows them to be identified”, explains Silvia Ramírez. “It is a real phenomenon that the Church interprets as the extraordinary action of the devil.”

Silvia has experienced some of the traits with which the cinema has characterized the possessed: “That your eyes roll, spit, blaspheme, scream… All these things are real, but the movies have created a taboo around this. They have turned the exorcist into a strange and weird character.”

Let us also add that Silvia, in the middle of a sentence, had an experience of levitation, in a voltaic arc position. This means that the body abnormally arches backwards, supported only on the heels. “What has healed me,” she adds, “isn’t just that they prayed to me; It has been a journey of conversion”. A path in which 15 priests have intervened, of which only 3 were exorcists. “I have received 300 exorcisms with the ritual of the Catholic Church and, in addition, 300 prayers of liberation”, which can be given by any priest authorized by his bishop.

His personal experience also reflects the difficulty he had, throughout the process, in finding the right people. That is why in his testimony he also wants to emphasize the need for the Church to train exorcists. “The Church is very afraid of exorcisms. And she acts lazy. She does not train enough exorcists, although I have to admit that, two years from now, there is more sensitivity”. Perhaps because “priests are detecting more and more cases that need prayers for healing,” explains Silvia.

In his book ‘What the hell do we see? the devil in the movies‘, the researcher Pedro Delgado Cavilla includes this reflection: “despite the fact that in the Catholic Church now the devil is spoken of in a low voice (unlike among Protestants, who openly acknowledge his existence) his possible presence makes us think. In some cases, where medicine does not achieve anything, an exorcism can obtain results”, he assures.

But how did it all start? How do you become possessed by the devil? Silvia Ramírez has thought a lot about it and identifies several phases in her fall process. It all started twelve years ago with a spiritual crisis paradoxically caused by her conviction that he had a religious vocation. “I was looking for my vocation and I felt that God was rejecting me, which caused me a very strong crisis, to the point of hating him. And I decided to go over to the other side,” she recalls.

As a result of this personal frustration, he searches the Internet for satanic sects with the intention of joining one, but he never did. “A red interior light warns me not to take that step. He abandoned the idea and stopped listening to satanic music”. “But in my heart I have opened a door,” he admits, and as a result, “I begin to have symptoms of a very strong demonic experience.” We are not yet in the phase of possession but in the previous one, that of demonic influence. In fact, a priest prays a liberation prayer to him and he regains peace.

Some time later she enters into what she calls a “silly crisis”, although it may not be so stupid. “I get tired of trying to be good. I feel that Christianity is a very heavy weight, that it is very difficult to fight in such a difficult world. I decide that sin does not exist and that I am going to be one of the world”.

Progressively Silvia is “falling away de facto” and abandoning the Church. “I start to have a loose conscience and try all kinds of spiritual experiences.” From Scientology to cosmic praying, or new age movements. “I tried everything, but immediately I left it, because everyone imposed new obligations, which is exactly what I was running away from.”

During an internship at a funeral home that had apparently been used for Ouija board seances, she and her colleagues feel a presence that shakes them and that ‘accompanies’ them into the car. “After three days I begin to have tremendous nightmares with presences that climbed on my bed, above me. And, at the same time, I start talking to myself, I go into a trance, I break rosaries… Everything comes to light when, while accompanying a friend from a charismatic group, I faint at mass and start manifesting evil presences; I writhe and scream.”

These episodes are repeated on three different occasions. In one of the cases, a priest witnesses the events and invites him to see an exorcist who diagnoses him with “demonic possession of several demons”. The personal fall to the dark side is already complete. From this point on, a five-year liberation process begins in which Silvia is clear that getting rid of the demons and returning to the Church are two sides of the same coin. “When I am aware of the torments I suffer, my life was lost. I couldn’t stand inside the temples, because I started to snort, I felt that something was scratching me inside, and I went into a trance. I couldn’t even pray an Our Father. And religious images produced a great rejection in me. But little by little I am making small advances, ”she recalls.

It is precisely at this moment that he experiences “a very great mercy from God.” “God puts people on my path that he didn’t know at all, who help me in prayer, who support me when I go into a trance. A young couple accompanies me. And I find priests who help me. God is giving me people who support me.”

However, the process was aggravated by difficulties, precisely because of the shortage of exorcists. “It was very hard because the exorcist who was treating me stopped and many months passed until he had a replacement.” He even traveled to Brazil in search of solutions for the evil possession of him.

In the midst of this process, he highlights, “I have been able to feel the Church as a protector, I have perceived the strength of the community through the recitation of the rosary, and I have been able to recover the beauty and strength of the sacramental elements and of certain prayers. The prayer has its effect and I have finally been set free.”

Along the way, he has discovered realities that he did not know or underestimated before, such as the strength of the Immaculate Conception, or the help of the angels. “These are things that I have been rediscovering.” “Any dedication to the Virgin is good, he explains, but especially the Immaculate Conception, which is the one that stepped on the serpent”, he concludes.

Silvia suffered a demonic possession: “The devil exists. I have been possessed and thanks to God and the Church I was freed”