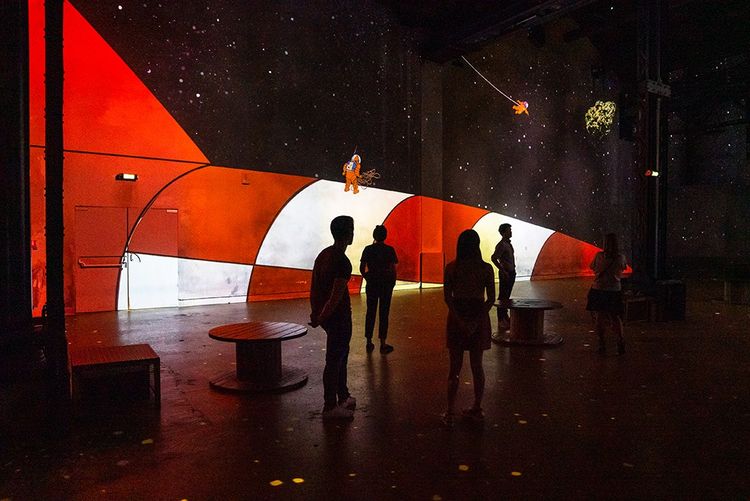 On this first weekend of November, plenty of ideas for entertainment and culture without being discouraged by the autumn weather.

The fine flower of tattooing

Tattoo high mass is this weekend. The Tatoo Planetarium succeeds the Mondial du tatto which has ended after two canceled editions. With 560 tattoo artists from all over the world and a hellish program, presented by pioneers like Filip Leu and Junko Shimada, these three days, still organized by Tin-Tin, give new impetus to this discipline which has become an art in just a few decades. to live in which France occupies a place of choice. tattoo-planetarium.com

Rivers shape landscapes and fertilize land. Essential sources of life, some were the cradle of great civilizations. Most of humanity still depends today on their moving waters. Our destiny is therefore linked to that of the rivers, which are both powerful and vulnerable. This is what we discover at the Musée des Confluences, which has entrusted Erik Orsenna, academician and president of Initiatives for the Future of Great Rivers, with the curating of this new exhibition which traces the journey of the drops of water from rain (beautiful work by Lou Rat-Fischer as a prelude) over the springs, beds, deltas and estuaries of the great rivers of the globe. Until August 27, 2023. museedesconfluences.fr

Playing the game with Ivana Müller

In partnership with the Festival d’Automne, the Franco-Croatian experimental choreographer Ivana Müller invites the public until November 13 to enter her show “We are still watching”. Every evening, for an hour, a mini-society forms and performs in its own way… never the same. During this month-long carte blanche, where the public takes its place as a full-fledged actor, Müller will also present his latest creation, “Force de la nature” (from Tuesday 8), and will dialogue (Tuesday 15) with the punk gardener Eric Lenoir. From 14 years old, maisondesmetallos.paris

In the clothes of Molière

Last weekend to discover more than 130 costumes and a set of models, photos and videos related to the world of Molière, whose 400th birth anniversary is being celebrated this year. The Center National du Costume de Scène summons its greatest characters: Alceste the misanthrope, Harpagon the miser, Tartuffe the false devotee, the indecisive Célimène and the naive Agnès, the vain Jourdain and the cunning Sganarelle. All are exhibited during a tour organized around the themes that punctuate the work of Molière: vices and virtues, satire of medicine and religion, mockery of the bourgeoisie, condition of women, jealousy and infidelity. Molière, still just as modern… Until November 6, https://cncs.fr

The liturgical vestment in majesty

After the evolution of stained glass windows and the history of the Plantagenets, the largest monastic ensemble in Europe highlights the art of liturgical clothing from the Middle Ages to the 20th century in an exhibition entitled Au fil du sacre. , a fashion in silk. Main sponsor and patron, the Catholic Church has appealed as much to the conventual workshops as to professional embroiderers and weavers, even more recently to great couturiers (Castelbajac) or painters (Manessier, Bazaine, etc.) who have not hesitated to renew the patterns and materials historically governed by highly regulated codes. Until January 30, 2023, .

The Barn wins out at photographers

Well placed at the edge of the forest, the country hotel has been organizing new workshops since this weekend in the company of seasoned photographer Fred Goyeau, a former Picto and Sebastiao Salgado agency. We can spend the weekend there: early morning departure on the paths, advice for use in the field, learning to use the manual mode, then printing in the darkroom of the house and finally making a board contact. Or prefer an express course (offered to customers): introduction in 1h30 to black silver print and bench to the enlarger. lebarnhotel.com/

Tintin at the Atelier des Lumières

Two more weeks to discover the world of Tintin in monumental size with the family: this is the exhibition to see at the Atelier des Lumières, the Parisian digital art center located rue Saint-Maur.

Designed in partnership with Moulinsart, exclusive holder of the rights to Hergé’s work, this immersive experience of around an hour embarks on the wanderings of the famous reporter accompanied by his faithful Snowy and his close guard, Captains Haddock, Duponts and Professor Sunflower. atelier-lumieres.com

We are celebrating the 40th edition of the Foire de Brive, this weekend, with a rich program proposed by the president of the year, François Busnel. We find there the writers Sylvain Tesson, Nina Bouraoui, Franck Courtès, Cécile Coulon and Marie Vingtras. But also a trio of comic book authors Joann Sfar, Christophe Blain and Mathieu Sapin, accompanied for the occasion by musician and writer Mathias Malzieu. And two great American authors: Douglas Kennedy and Jim Fergus. Comedian and music hall artist Lambert Wilson will also be there for a tribute to Marcel Proust, whose centenary of his death we are celebrating. www.foiredulivredebrive.net

After contemporary art, it’s the turn of photography to spread out in the capital. For its third edition, the “Photo Days” Festival brings together a certain number of exhibitions in around a hundred places (galleries, atypical places, around fifteen museums).

To warm up before the return of the Paris Photo fair next week, of which Les Echos Week-End is a partner: Mohamed Bourouissa on the Place Saint-Germain-des Prés, Nancy Wilson-Pajic at we are_, Jean-Michel Fauquet at the Rotonde Balzac (from 7 November) and Pieter Hugo at the Sorbonne Artgallery (from 8). More info on Photo days. Paris

The civilization of hieroglyphs

On the occasion of 200 years of the decipherment of hieroglyphs, and to celebrate its 10th anniversary, the Louvre-Lens is organizing a major exhibition dedicated to this fascinating writing.﻿

Thanks to an immersive journey of more than 350 works (sculptures, paintings, art objects, documents and graphic arts) this ambitious retrospective is also an opportunity for the Louvre-Lens to pay tribute to the man who was the museum’s first curator. Egyptian from the Louvre, early 19th century. Until January 16, 2023. www.louvrelens.fr

Meet our friends the trees

Walk in the colors of autumn this Saturday. The association of Friends of the forest has traced a route of more than five kilometers in the forest of Saint-Germain en Laye. A walk, accessible to children from the age of six, to discover trees with “remarkable characters”. An initiation outing too: learn to recognize species and, why not, become passionate about their secret powers. “Remarkable trees in the forest of Saint-Germain”, reservation.seine-saintgermain.fr

The beauty of the devil

Diabolical exhibition at the Frac Franche-Comté which explores the presence of Satan in contemporary art from the angle of his figuration and his metamorphoses through a journey bringing together the works of more than 35 cutting-edge artists (Nicolas Daubanes, Douglas Gordon, Suzanne Husky, William Kentridge, Annette Messager, Andres Serrano, Iris Van Dongen, Jean-Luc Verna…).

Beyond the representations making explicit reference to the devil, the exhibition more broadly questions the aestheticization of evil. Until March 12, 2023. frac-franche-comte.fr

Tea room at the BNF

When a small Parisian institution opens its doors in one of the capital’s beautiful monuments, we rush! For their 20th birthday, Rose and Jean-Charles Carrarini, the founding couple of the Anglo-French tea room Rose Bakery, who introduced all of Paris to the “carrot cake”, are offering themselves a new right bank anchorage, in the heart of the site. history of the National Library of France just renovated after 10 years of work. Same reason, same punishment: simple home-made, family cuisine that nourishes body and soul, organic products, a menu that changes every day, British classics like the famous scones and a terrace in fine weather. The other good reason to discover the new BNF and its exceptional collections! rosebakery.fr

The ballet of white stallions in Nanterre

Notice to horse-riding fans: on January 7 and 8, you will have to be at the Nanterre stadium converted into a dressage career on the occasion of the arrival in Paris of the most prestigious of equestrian institutions. The very classic Spanish Riding School of Vienna will make two performances with around thirty Lipizzaner stallions led by eight riders. Pure grace. parisladefense-arena.com/

The threatened Dead Sea crystallizes into art in Jerusalem

High place of the Bible, the lowest point on earth and a grandiose natural panorama, the Dead Sea is the main source of inspiration for Sigalit Landau. The contemporary Israeli artist has developed a pioneering practice based on sea salt that the Israel Museum in Jerusalem is exhibiting until June. She submerged objects in this salt-saturated lake for several weeks, transforming fishing nets, ballet tutu, Hasidic dress and piles of shoes into amazing sculptures of white crystals. Presented as an awareness of the fragility of this ecosystem subject to rising temperatures and the pumping of the Jordan River, “The Burning Sea” pays tribute to the magnificence of this mythical landscape but also draws attention to the ongoing ecological disaster. imj.org.il/en/content/visitor-information

“Mythologies”, the new creation by choreographer Angelin Preljocaj, is being played until Saturday: the dancers of the Ballet de l’Opéra national de Bordeaux and the Ballet Prejlocaj revisit a dozen mythical stories, from the legend of the Amazons to that of ‘Icarus. All ears also for the symphony orchestra interpreting the original composition of the ex-Daft Punk, Thomas Bangalter. chatelet.com