The height of Marcelo Ebrard and his fast pace make him stand out among the medium influx that the Ponciano Arriaga airport in the capital of San Luis has on a Thursday morning. There is no major paraphernalia for those who arrive, officially no one receives them except the state government vehicles that are already waiting for them.

Gray suit, green tie. She is accompanied by the undersecretary for institutional affairs, Martha Delgado Peralta, and her head of social communication, Esteban González. Assistant and protocol were already in San Luis Potosí territory and deployed in the Government Palace, the BMW company, the Center for the Arts, the Autonomous University and even in a private home where a private meeting had been scheduled. 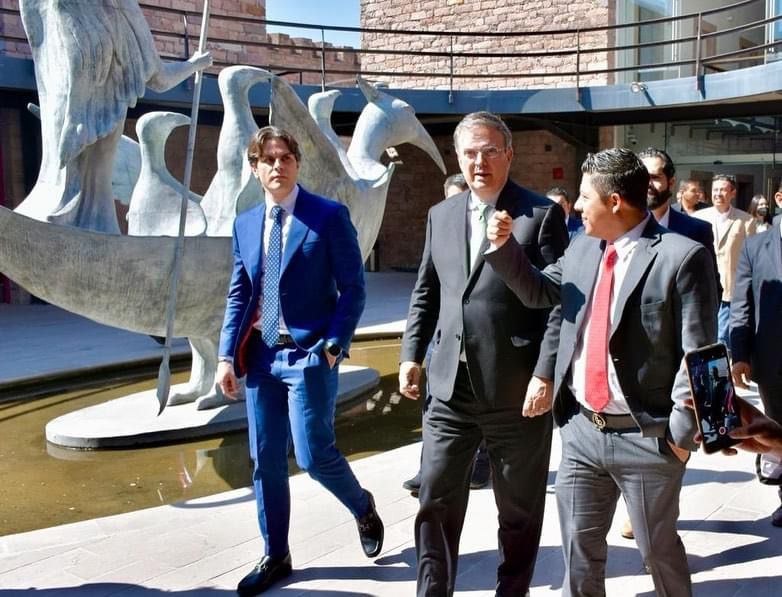 Salomón Rosas, “plenipotentiary” representative of the Equity and Progress Foundation, also arrived in the capital a day before and if anything, he was the only one to find the federal official for whom he works in his promotion.

Big strides, quick salute, The black van in which the Mexican foreign minister gets into is ready, they start off and are followed by a caravan of four vehicles that are escorting him.

The visit to the palace is canceled and they leave directly for Highway 57 until they reach the BMW facilities.

He was received by Governor Gallardo, Secretary Guadalupe Torres, the head of Economic Development, Juan Carlos Valladares, and the managers of the plant. 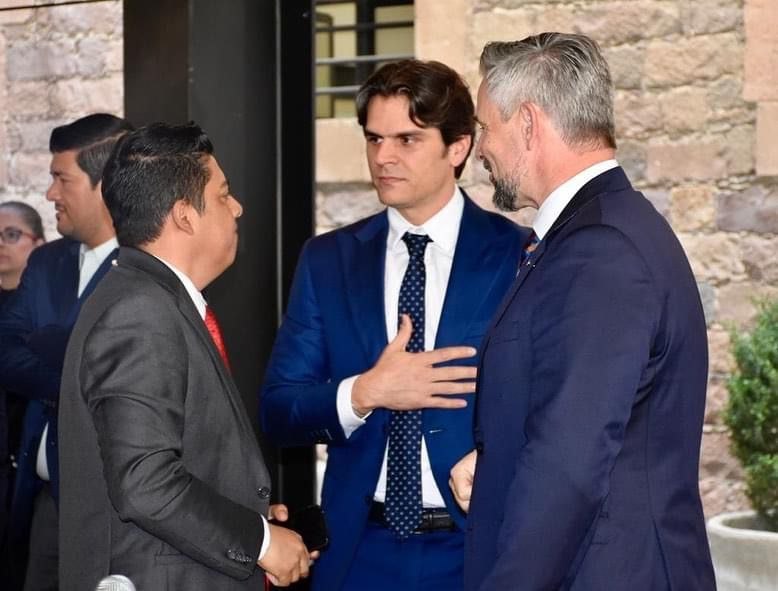 He does not stop walking, walks, greets, stops with a group of workers who come from Celaya and who are dedicated to supplying brakes for the German plant.

From one area to another and from one assembly line to the next. Finally they sit at a small and select square table. A link is made to Munich, there is a translator, but in the greetings and courtesies Marcelo Ebrard makes himself understood, introduces the governor and they get to the point.

The negotiations and agenda are advanced by Valladares Eichelmann, there is no time for greater courtesies, the high point is the generation of energy. The capacity, whether it is available or not, because the plant in which they want to build electric “beemesdobleus” requires very particular energy specifications.

Land, tax incentives, and other accessories are resolved. The governor endorses A round trip is proposed, given the conditions, a trip to Munich to the BMW facilities and instructions are even given “in front of the Olimpia Park”…

More speed. The managers of the plant have two vehicles, armed by hands from San Luis Potosí, ready to be tested by the chancellor and the chief executive.

Marcelo Ebrard takes a black BMW hybrid, the president is given a blue one. Each one takes a lap on the test tracks. Ebrard Casaubón accelerates.

Photos at 1/1000 on the shutter. Fast. They say goodbye. Hands fly between state officials and the business entourage. Gallardo and Valladares schedule a new meeting at the plant. The caravan of vehicles leaves once again.

You have to deal from east to west with 57 at two in the afternoon. Potosí road congestion does not give way to diplomacy. Accelerate, brake, horn.

The planned interview is cancelled. The visit to the work of the ANUIES 2022 International Conference, to which he was invited by the Autonomous University of San Luis Potosí, was canceled one day before. 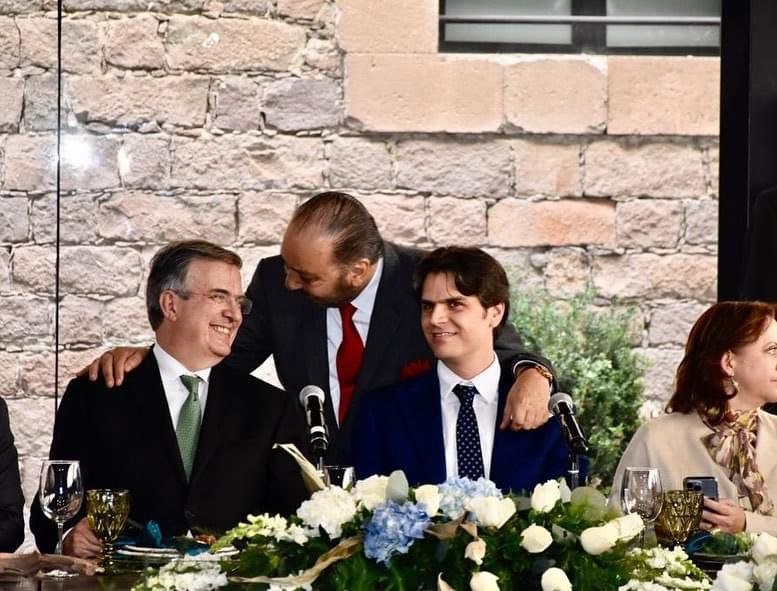 We must speed up the agenda because, as he stated later, the president himself asked him to go to Egypt to the COP27 climate summit and you have to find the time wherever.

The vehicular delegation arrives at the door of the Ceart, members of the Potosí Council and leaders of business chambers already had 45 minutes waiting.

Interview? Yes, there is no other way, three bold reporters rebuke him, but bolder attends them soon but with no place to extend.

“We are finalists” (out of two, but finalists) answers about the possibilities of the new Teutonic investment. “We have good numbers, political stability, fiscal stability and everything looks “feasible”. Another question? No. She said what he meant. “Thank you very much and thank you very much.” repeats his press officer anguished, the “Montessori Boy” as the national media have told Esteban González Mancha that he looks more anguished and in a hurry than a prisoner last night.

That’s where time stopped: An elderly woman, unhurried and calm, approached the Mexican diplomat, with time out of the equation, spoke to the official and gave him her blessing. They are potosin lands.

The mariachi with Acuarela Potosina starts right at the entrance of the federal official. Personal greetings to each member of the table, a big hug to Teófilo, Don Carlos Torres, Juan Carlos Valladares García, to all with affection, without haste, but without pauses.

The first to the microphone is Juan Carlos Valladares Eichelmann, Secretary of Economic Development. San Luis is thriving and the numbers are going: 1.2 billion in foreign investment have been reached in this government, growth has been maintained at an average of 2.3 percent and more than 7,000 jobs have been created. That was the speech.

The message was different and it was implicit: private initiative and the drivers of the San Luis economy sitting at the same table. Government and business sharing bread.

The waiters, clever by themselves, are herded so that everyone already has the plate served.

Marcelo Ebrard empties his bites while listening to the secretary’s intervention. The guests do the same.

The chancellor takes the floor and makes very particular announcements. It highlights the conditions that by “providence” and others by search, have placed Mexico in an even more strategically attractive place after the pandemic.

“For what we have achieved and also, for what has happened by sheer providence, our conditions have improved for the world. We are partners with the United States, but even though we already were, now we are dealing on better terms. He brought forward a “convoy” of states and businessmen to knock on doors that have never been touched before in the United States.

the most attentive, The one who came to strengthen ties is Luis Rosendo Gutiérreznobody introduced him, nobody said who he was and it will not be said in this brief chronicle. He perfectly knows his mission and was at the right table to carry it out. 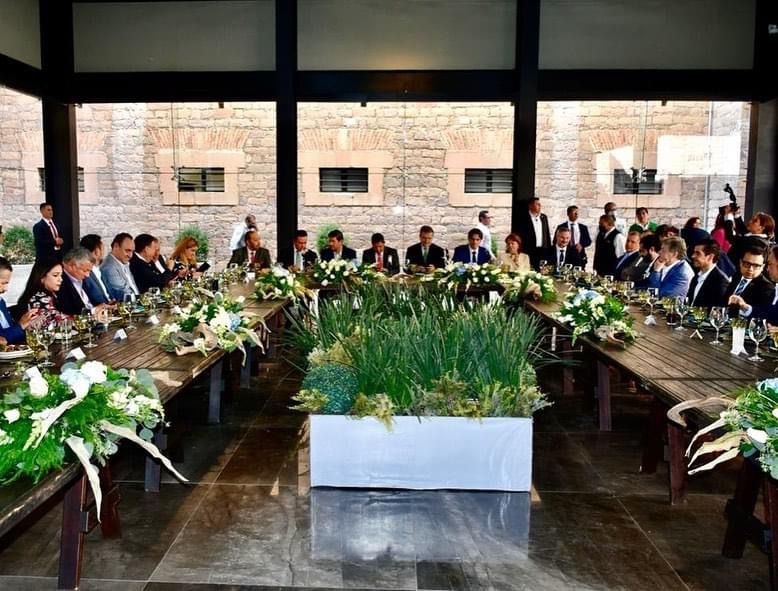 Governor Gallardo, in his speech was brief because “the food gets cold and we are all hungry.” He made the foreign minister feel welcome and highlighted the consolidation of the Potosí Council, the decisions that are made by his government hand in hand with the IP. Working together for “those who have, for those who have not and for those who want more”. Political peace and social peace.

“This is how Mexico feels”, the mariachi starts. The protocol team approaches with a bottle of award-winning mezcal from Potosí that is adorned with Huichol-style government logos. Round of hugs, hands flying, pasodoble at the exit and withdrawal.

Marcelo Ebrard came and went from San Luis Potosí. He accelerated step, car, snack, interview and message. He was longer than Adam Augustus, but he was faster.

Also read: Xavier Nava? Why do they remind me? | Notes by Jorge Saldana