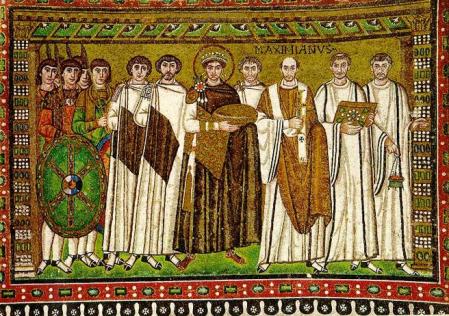 Ravenna is a city that falls in love. The mosaics that cover the walls of churches and religious buildings are the most important in Europe due to the intensity of their colors, the richness of decoration and a strong symbolism that evokes a great spirituality. They have been declared by UNESCO as a World Heritage Site. Also, Dante’s tomb is an added attraction.

In 404, Honorius left Rome and chose Ravenna as the seat of the Empire. Galla Placidia, sister of Honorius, reigned with Roman splendor over the town, before the conquest by the Gothic kings Odoacer and Theodoric.

Its privileged location on the Adriatic, open to the Greek world, linked it to Brancio, where the capital of the empire had moved in 476. Later, it was ruled by Justinian.

Ravenna is a peaceful city that has preserved important treasures accumulated in the period in which it was the capital of the Western Empire. The morning is fresh and pleasant, with very good light.

Basilica of Saint Apollinarius the New

San Apollinario el Nuevo already warns of its beauty in frescoes in the city with its 38-meter-high cylindrical bell tower. It has three naves separated by Corinthian columns and exquisite mosaics with a gold background.

It was erected by Theodoric, of Arian worship with his fall it was dedicated to Saint Martin, bishop of Tours and later Saint Apollinarius. The virgin on her throne with the angels, the wise men, the procession of the martyrs and the last supper are very representative mosaics.

It has a beautiful fresco in the dome by Guido Reni. They offer mass sung with children’s voices dressed in white robes. The boys and girls offer peace to all the faithful.

The chair is the most precious piece in the museum, it is made of ivory, from Archbishop Maximilian. There is a Latin inscription that says so Aut Lux hic nata est aut capta hic libera regnal (Either light is born here, or imprisoned here, reigns free). The origin of the word chair is the chair or armchair.

To highlight the small chapel, an oratory dedicated to Saint Andrew, on the first floor of the archiepiscopal museum. A figure of the warrior Christ appears, with a breastplate and chlamys stepping on the head of a lion and a serpent, symbols of power and evil. He carries a cross in his right hand and a book in his left which reads: Ergo sum via, veritas in vita (I am the life, the truth and the life). In the apse a sky studded with stars with a cross in the center. There is a beautiful silver cross called “d’Aguello”.

The baptistery of the cathedral was erected by Bishop Orso. It has an octagonal shape like that of the Milan Cathedral. The primitive pavement is 3 meters below street level. The medallion reflects the baptism of Christ by John the Baptist. There are the 12 apostles. Also the figures of the prophets. Everything revolves around the central medallion that suggests the idea of ​​continuity and infinity.

It is the pearl of Ravenna. Andrea Agnello in the 9th century said that it could not be compared with any other temple erected in Italy. It is a marvel of the audacity of the structural forms and the splendor of the decoration. It was finished in 547. It has a concentric shape and an octagonal base.

There are eight robust columns and they support the dome with frescoes by Barozzi, Gandolfini and Guarana. At the apex of the vault we see the Mystic Lamb. Next to the four evangelists. The lives of Abraham, Abel and Melchizedek. Around the characters, a rich and vibrant landscape. In the dome of the apse, the Redeemer; and to the left, the martyr San Vitale.

The imperial offerings of Justinian and Theodora, the paten and the chalice destined for the sacrifice of the mass are present. Here the decoration reaches a prodigious vision of movement, rhythm of musicality, exaltation of color, which indicates the magnificence of the court of Byzantium.

It is an admirable construction in the form of a Latin cross with great architectural harmony adorned with exceptional mosaics.

The vaults have star and floral motifs, the dome is deep blue. On the eardrums, images of serene symbolism like the good shepherd. There are the sarcophagi of Gala Placidia and her family.

The great Italian poet Dante Alighieri is buried in Ravenna, the city where he died after his Florentine exile. The city dedicated a street and a theater to him.

His tomb has a Latin epitaph written by Beranardo Canaccio in 1327: “The rights of the monarchy, heaven and the infernal waters of the phlegethon I visited in song while my mortal destiny lasted. But since my soul was taken as a guest to a better place, it lives happily among the stars with its creator. Here I lie, Dante, exiled from my land, son of Florence, homeland of little love.

In the center of the vault of the funerary temple hangs a votive lamp containing oil from the Tuscan hills. The municipality of Florence offers this oil on each anniversary of the poet’s death.

■ HOW CAN I PARTICIPATE IN THE LA VANGUARDIA COMMUNITY?