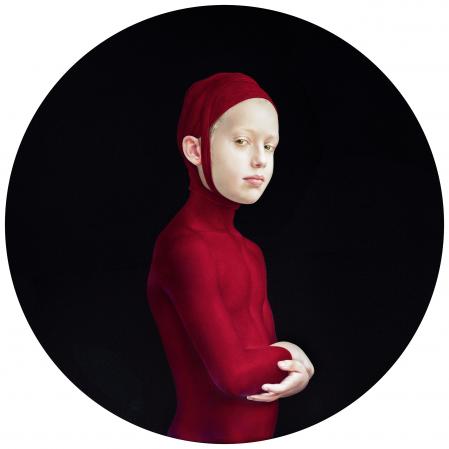 War on beauty, create by destroying

The works of Alejandro Monge (Zaragoza, 1988) are clearly political. This sculptor, who also often expresses himself through hyper-realistic paintings to confuse whoever he observes, wants his opinion about what is happening in our society to transcend through the pieces he creates. And his messages are usually not exempt from violence, based on the postulate that destruction is also a form of creation. He is responsible for a large number of carefully reproduced banknotes that were then burned, or a series of hand grenades embellished with colored details. The destruction that he defends is, above all, that of the canons of classical beauty, because he considers that good taste is overrated; yes, after demonstrating his ability and his technique to achieve that pernicious beauty. Thus, his works often appear from the meeting of classicism with languages ​​typical of street art or pop. Against the idealization of the forms that can be reached through imagination and virtuosity, he defends that the gaze be directed to reality and its problems, apparently much more difficult to solve. After showing Monge’s work at numerous international fairs, 3 Punts Galeria, with InverseShapeshows a set of hyper-realistic works in cement and large format that reflect the absurdity of many of our daily movements.

The figures immersed in color

The work of Salustiano (Seville, 1965) has been defined by American critics as “beautiful, disturbing and profound”. The artist himself assures that the will of his work is to convey the idea that “with passion and love it is possible to change life until it resembles what we want”. He is a prominent representative of the new explorations that artists are carrying out around the possibilities of figuration. Thoroughly represented human forms are wrapped in immensities of color – especially red, black and white – to make present the mystery of what is perceived and what is hidden. The spirituality and mysticism to which the characters’ gazes push is another of the most notable characteristics. N2 Galeria, from one of the outstanding artistic axes of the city, Enric Granados, presents the exhibition L’amor, that tot ho clarifies, a set of works by this artist who in 2022 alone has exhibited in spaces in South Korea, the United States, London, Paris, Beijing, Munich, Hamburg, Sorrento, Malaga and Madrid. He has made the covers of a huge number of national and international publications and magazines, of which New York Times it is just an example. His works are expanded by some of the most notorious collections, such as those of Pérez Simón, Ralph Burnet or the president of the Foundation of the Guggenheim Museum in New York, William Mack.

A member of the Estampa Popular Valenciana group, and married to the critic and art historian Tomàs Llorens, the German Ana Peters (Bremen, 1932-Dénia, 2012) suffered the animosity of critics and the artistic establishment under the Franco dictatorship. Now, the Marc Domènech gallery recovers, in the exhibition Anne Peters. The 60s. Artistic avant-garde and social realismthe works with which it was proposed to question, from a clearly pop filter, the aesthetic and social stereotypes with which an iconography of the values ​​defended by Francoism and attributed to women had been constructed.

After more than twenty years, the Sala Parés makes it possible for Barcelona to enjoy the works that Guillermo Pérez Villalta (Tarifa, 1948) has produced in the last ten years. He is one of the driving forces behind the new figuration, and has also been considered a representative of neomannerism. The exhibition these last few years once again shows his ability to create dreamlike environments, carefully planned according to his training as an architect, where no line is gratuitous or meaningless. A great opportunity to understand why his work captivates minds like Pedro Almodóvar or Jacobo Siruela.

Current and retro technology and technique

Who died last fall, Luis García Núñez, LUGÁN (Madrid, 1929), went through various expressive techniques and languages, such as constructivism, geometric abstraction or kinetic art. Being among the first artists to incorporate the computer into his artistic practice, he worked to transform electromechanical pieces into pieces that came to be considered aesthetic productions. Nogueras Blanchard presents a set of sculptures by someone who, applying his work practices as an electronic technician for Telefónica, opened many paths in research on art, technique and technology in Spain.

In her childhood, with her parents, Susana Solano (Barcelona, ​​1946) used to visit the antique dealer of the father of Mónica Ramon, architect of the exhibition Small and big things: lightness and strength in the work of Susana Solano, the proposal of the Artur Ramon gallery to open the season. In this one, the jewels created by the artist will be seen in what she has considered as a return to her beginnings, to the desire to draw with matter; while the large pieces that will be present aim to expand her reflection around her creative process and the use of materials –iron, steel, aluminum– such as the stroke with which she fixes her calligraphy. (Work: The Visible III, 2010)

A pioneer of conceptual art

To showcase the prominent names with whom it works, Àngels Barcelona has chosen Esther Ferrer (San Sebastián, 1937). But far from claiming it only as a historical name, Ferrer stands as an example of tireless work and research. She did it when hardly anyone here dared with the performances, she continued while the spotlights still did not point to her and she continues at the foot of the canyon. Here she will show works on prime numbers and the representation possibilities they offer. The coincidence with the proposal by Isidoro Valcárcel Medina, in ProjecteSD, draws attention to an important moment in contemporary art in Spain.

The fragility of Barcelona

In his sculptural production, the Mexican artist Miguel Ángel Madrigal (Mexico City, 1974) usually represents the tension derived from the confrontation of concepts such as nature and culture, human beings and the city, or eternity and finitude. The synthesis tends to border on the absurd, while the disconcerting effect is almost always assured. in the sample Spaces of Barcelona, in LAB36, endorses some clearly identifiable architectural elements of the Catalan capital to deepen his reflection on the fragility, balance or shelter that cities offer to the human essence. (Work: Eco Installation, acrylic, led light and enamel, 2021)