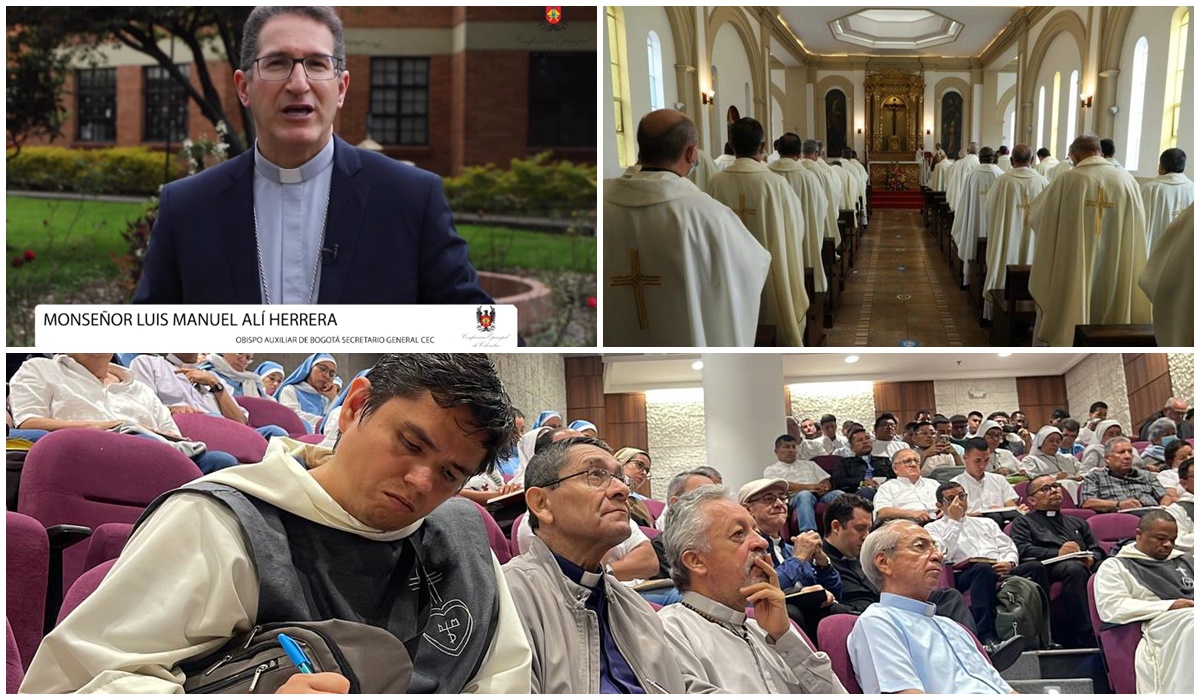 “The Catholic Church in Colombia, at the national and local level, is experiencing a moment of grace, review and projection, in light of Pope Francis’ call to be a Church in communion, participation and mission”, highlighted Monsignor Luis Manuel Alí. Herrera, secretary general of the Episcopal Conference of Colombia, who attended an interview with the archdiocesan office of communications in Bogotá. From this point of view, the recognition of the path traveled, of the contribution of priests, men and women religious, pastoral animators and lay faithful, is an imperative that encourages and challenges the mission of announcing the Gospel. A call that, as the auxiliary bishop of the Archdiocese of Bogotá also affirms, passes through the awareness of the need to articulate pastoral action, form networks, that are enriched and projected with the different initiatives, arising in the reality of each territory. “What is still missing on the subject of evangelization is networking, networking, because we cannot work as lone rangers (…) Spread your tent! This is what this continental phase of the Synod invites us to,” he specified. It is a question, he adds, “of valuing all that one has, but articulating it, knowing that we are not independent republics. The great blessing we have is that we firmly believe that the Lord is the one who helps us and invites us to be <one, holy, catholic and apostolic> Church, and that has to be seen in diversity”. Another issue that would contribute to strengthening the pastoral and evangelizing action of this Church, explains the bishop, is the active and committed participation of the baptized in the dynamics of the Church, but also in social settings, from their condition as Catholic citizens. . “For a long time the Church stopped falling into the temptation of political partisanship, but we have the responsibility of being political agents, we are citizens of a nation, for this reason we cannot be oblivious to different realities, especially when they touch human dignity (… ) From the groups, the territories, the small communities, we are called to raise our voices”. Synodal path and culture of care, aspects studied in depth during the year Two major fronts marked the pastoral itinerary, both at the archdiocesan and national level, processes in which Monsignor Luis Manuel, from his double service to the Catholic Church in the country, participated and led . The first: the consolidation of the document that synthesizes the participation of the 78 ecclesiastical jurisdictions of Colombia in the synodal path, which was delivered to the Synod Office in Rome. Second: strengthening the culture of care and protective environments in private churches. On these two topics, he shared with the main fruits: Synodal process: “Seeing how the communities appropriate this synodal path, this proposal, is extremely interesting. One realizes that this is not a piece of paper, but that it has skin, that it is incarnated, that it is lived (…) Many communities, many lay faithful, are the ones who really experience what it means to be a synodal Church, in communion , in participation and in mission”. Culture of care and protective environments: “Since 2013, when the ‘Guidelines for the drafting of diocesan decrees for the protection of minors’ were presented by the Colombian Episcopal Conference, applied, at the time, in each ecclesiastical jurisdiction, they have been working on this issue, with the support of a group of lay people who were part of the first commission for the protection of minors”. National Council for the Culture of Care, with whom we are working very judiciously and seriously on some preventive guidelines”. The guidelines: ‘Culture of care in the Colombian Catholic Church’, were approved at the 113th Plenary Assembly of the Colombian Episcopate and presented on August 15, 2022. They will enter into force on January 1, 2023, on the Solemnity of Holy Mary Mother of God. The document presents “general guidelines for the different ecclesiastical jurisdictions of the country to implement policies, protocols, procedures, actions and strategies within the framework of a System for the Culture of Care”. For its implementation, workshops have been started by ecclesiastical provinces. The first was in the Archdiocese of Florence, with the participation of representatives of the Diocese of Mocoa and the Apostolic Vicariate of Leticia; A total of 14 formative and informative meetings are expected to be held over a period of two years. “It is a great joy to see this proposal to make our Church a safe home, from a culture of care that involves all of us (…) It is necessary that the catechist, the person in charge of missionary childhood, the person in charge of the group of acolytes , the person who is animating some adolescent camps, our evangelization animators, all of us, as a Church, let us assume these guidelines”. Finally, by taking a personal and balanced look at the period of the year 2022, she expressed joy for the opportunity to serve this Church, to know the territories and to contribute to the evangelizing task. He highlighted the possibility of sharing weekends with parish communities and meeting her brother priests. “This for me is a spiritual balm.” And she encouraged us to continue strengthening the synodal path, the pastoral articulation, and to fully live the season of Advent as a preparation for Christmas, the central time of our faith. Source: Off. of Communications of the Archdiocese of Bogotá Next, balance interview