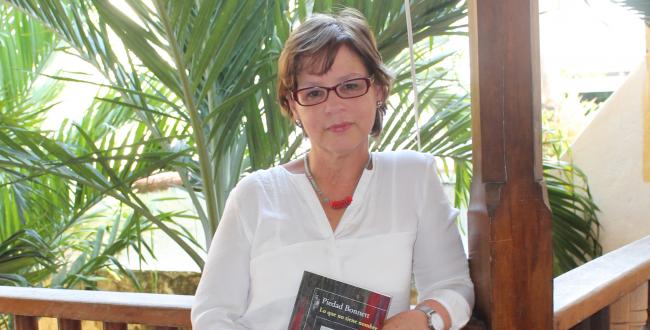 The language of love is undoubtedly poetry. Throughout the centuries love poems have been the best way to express the deepest feelings, especially in relationships. Many are the poets who have left in writing the most beautiful words to express what the heart says, writers who have revealed the color of their soul through the letters.

“It is the message of love from the shy”, says the poet Piedad Bonnet, playwright and Colombian writer, one of the most outstanding lyrical pens in the country, perhaps because of the nostalgia, eroticism and sensitivity that she imprints on each one of her poems.

However, in a world with so many noises, rushes, ups and downs, a set of emotions, distractions and ease, there are those who wonder if lovers still resort to poems to conquer or has the way of expressing feelings through poetry changed.

Bonnet’s intuition reaffirms that the new generations are indeed looking for ways to express themselves through poems, writings and romantic lyrics, using new tools.

Currently, the internet and social networks allow poetry to be brought closer to the youngest so that the genre is not considered old-fashioned art, but rather a modern way of expression that serves to transmit values ​​and feelings.

To say I love you

Although there are new ways to fall in love, prose and beautiful words continue to be protagonists in all generations, as the writer states.

“Saying I love you today is not easy and that is why they resort to the poetry of great poets, such as Mario Benedetti, Pablo Neruda or Borges, among others. Although the years have passed, we are in another century and new trends have emerged, there will always be a few who appeal to poetry as an instrument of communication with the other, let’s say seduction, like a love letter. I think that today, to seduce, people appeal more to the song than to the poem itself. But there will always be the boy or girl who reads it and discovers it as a message of love. In addition, there are always young people who are writing poetry, because it is something that comes from the heart and sensitivity is on the surface”, he commented.

Nowadays, platforms like Instagram have included and popularized new authors who use this literary genre with illustration to deal with issues such as love and heartbreak, emotions and life in general.

Bonnet is a woman who has been able to express her deepest feelings, painful and fervent, in each of her writings. She doesn’t like garish literature; she prefers the naked phrase, characterized by seeking the emotional marrow without falling into the ridiculous, without so many fireworks. In short, that sensitivity in the sobriety of the word is what characterizes her as one of the most outstanding Spanish-speaking poets of the 21st century.

“There is no scar, as brutal as it may seem, that does not contain beauty. A specific story is told in it, some pain. But also its end. Scars, then, are the seams of memory, an imperfect finish that heals us by damaging us. The way that time finds that we never forget the wounds”; this is one of the stanzas of the writer born in Amalfi (Antioquia).

Undoubtedly, emotion, courage, humility and rebellion convey his poems. Among his most recognized works are “Nobody at home”, “The thread of the days”, “That sad animal”, “All lovers are warriors”, “The rest is silence”, “The inheritances” and “Unsolicited explanations ”, a book for which he won the XI Casa de América Award for Ibero-American Poetry in 2011.

You may be interested in: Great projections of the cultural and ethnic diversity of the country

“I believe that romantic poetry will always exist. In my long experience I have been able to see that the poem has been present for generations and we still find young people in love with poetry. People who love poetry endure through the centuries; maybe at this moment it is a little different from the previous one, but there are beautiful poems that people still say, write, listen to, whether in a letter, in a song or in a collection of poems. I think people find a very appropriate way to declare love through the words of others, that’s why I say it’s for the shy, because we use the ideas of others to express ourselves, whether on a piece of paper, on a card, on the cell phone in a love letter. People use thousands of poems that are on the Internet, there are all the poems of the most famous poets, so people take from there and send messages with poems by Neruda, Benedetti (…)”, says Bonnet.

A little over 30 years ago, Piedad Bonnett began to share her world through nine collections of poems, six novels and five plays where a phrase from Hippocrates rescued in “Where Nobody Expects Me” is applied: “Life is brief and long art. The occasion, fleeting; experience, misleading; the judgment, difficult”.

The literary universe of the writer has been full of vulnerability, loneliness, pain and, in turn, happiness and love. All her experiences have served her to create verses and prose that make her characters come to life and convey emotions.

He had a son, Daniel, who inadvertently gave him the theme of the book “In what has no name”. The boy committed suicide and the writer told about that experience in a novel with painful and intimate rhythms.

“Poetry is so diverse. One writes with the impulse of his own experience, time goes by and he puts it in front of certain topics, for example, if life brings me closer to death, then death is talked about; if a son is lost, as I lost him, they talk about it. This genre is full of what is around and one as a writer is taking from the outside world to create and write”, says Bonnet, who states that in the case of the conquest, women have much more freedom; “They have the resource of the word, share intimacy, their emotions and their fears.”

For the writer and philosopher, eroticism is also immersed in romantic verses, it is the concept that turns sexuality into culture and, according to her, there can be eroticism without love, but not love without eroticism: “What fills sophistication to sexuality is its transformation into eroticism. This has to do with play, imagination, searching, spirituality and refinement. Pure instinct becomes a manifestation of culture.”