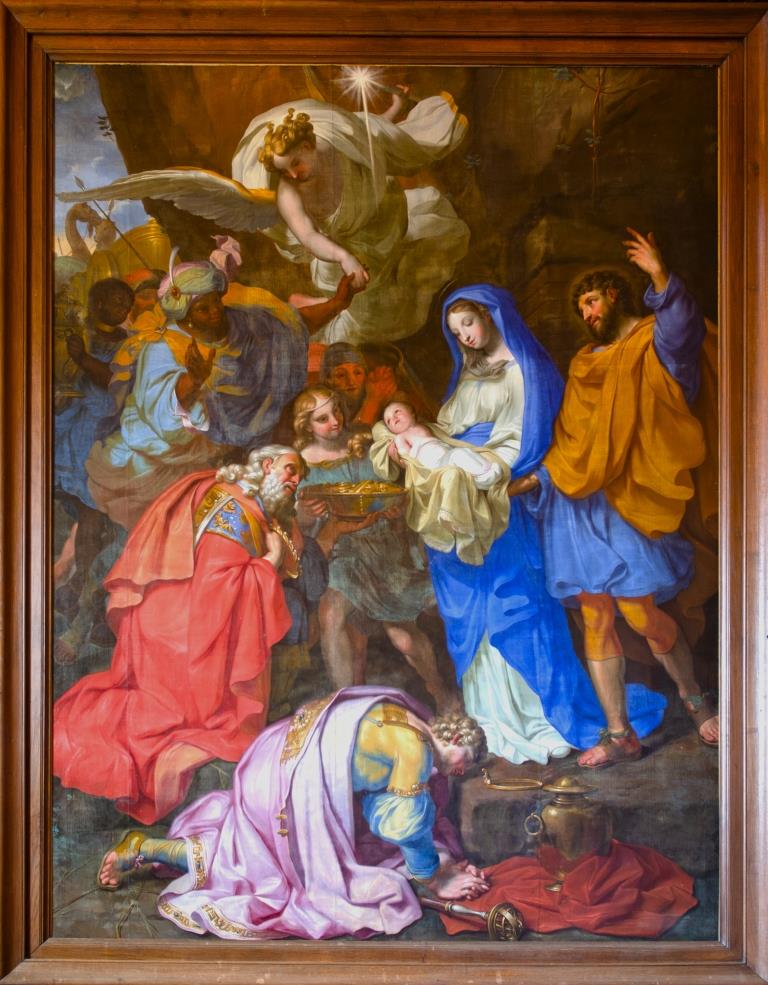 This monumental composition (4.1m x 3.2m) delivers, in a very ornate style, a reading of the story appearing in a few verses in the Gospel according to Saint Matthew (2, 9-11)

After hearing the king, [les mages] left. And behold, the star which they had seen in the east preceded them, until it came to rest above the place where the child was. When they saw the star, they rejoiced with great joy. They entered the house, they saw the child with Mary his mother; and, falling at his feet, they prostrated themselves before him. They opened their coffers, and offered him their gifts: gold, frankincense and myrrh. (Mt 2, 9-11)

Claude François, in religion Brother Luc [1], probably painted this monumental work for the Récollets church in Saint-Germain, where it was to be placed behind the high altar. The painter is a monk; the scenes he composes should serve to edify the faithful. In this perspective, he pays attention to every detail, both in the gestures of the characters and in the objects that characterize them. Even more than an evocation of the encounter between the nations and Christ, the work can be read as a hymn to the One who said ” I am the light of the world (Jn 7:12).

“From Egypt will come sumptuous fabrics; Ethiopia will come to God with full hands” (Ps 67,32)

The contemporary eye accustomed to simple and stylized forms is disturbed for a moment by this abundant picture. However, the organization is more rigorous than it appears at first sight. In the left part, the characters crowd, while the right part, more stripped, highlights the Holy Family.

Each area of ​​the painting has been worked on for a message. On the left, following an arc of a circle, is the visit of the Magi, here presented as kings in accordance with tradition[2]. The verticality of the elements is full of meaning: on the floor are placed objects referring to wealth, power and science.
In the celestial zone, an angel covers travelers with his wing, following the model of the Guardian Angel which develops in the 17th century.e century: with one hand, he guides the man in the turban; in the other he holds a wand[3].
In the upper left zone of the painting, an opening made in the rock provides the necessary depth to evoke, in a few details, the caravan of the Magi from afar: we can see raised spears, two camels – one of which is bearded – and a golden chariot, while the sky diffuses the pale light of the rising day.

All nations will come and bow down to him

It is not enough for Brother Luke to evoke the three Magi; each empty zone is filled with a human presence, of greater or lesser importance. It is thus no longer three people and their servants, but a crowd that seems to be coming to meet the Child Jesus. The worship of the Magi is truly here Epiphany for the world.

A scenography of the meeting

What a contrast with the right part of the painting! On the dark background of the rock where you can see a house, the Holy Family stands out, highlighted by its position on a mineral step. Brother Luc chooses to represent Mary standing, contrary to the pictorial tradition which installs in the Adorations of the Magi a Virgin seated in majesty, showing the Saviour. The gesture serves the project of the painter who paints characters carried by an inner impulse to be even in their body, praise to the living God.

In the exact center of the composition, the Child supported by the left arm of Saint Joseph rests on the arms of his mother who offers him to the gaze of visitors. The Word made flesh appears in moving weakness: Jesus is wrapped in swaddling clothes that bind his arms[4] ; he is totally delivered to the world. He who receives the gifts of the Magi, is the Present offered to each one.
And before this child, unheard-of wisdom of God, come to prostrate themselves the scholars of this world. Frère Luc worked on every detail: no object is there for decorative purposes. Thus, near the prostrate young magus lie the crown, symbol of the powers of this world, and the armillary sphere, an astronomy tool which represents celestial space. It symbolizes human knowledge that has become useless at the end of the road when divine Wisdom appears. The old mage, too, stripped his head of the crown he wore.

We remain fascinated by the splendor of the clothes of the strange visitors, depositing a tray of gold coins and two perfume pots: one of them is placed at the feet of the young magician; we see the other in the hands of the African servant, filled with an incense which spreads its smoke[5]. The splendor of the pearls and precious stones that enhance the adornment of the dark-skinned mage is a metonymy of the prophecy of Isaiah: The treasures from beyond the seas will flow to you, to you will come the riches of the nations (Is 60.4).
But these riches are not only material: they also concern science. The mantle of the old magus is enhanced with figures of the zodiac. That of the young man prostrated at the feet of Christ is not decorated with a decorative motif, but with strange writing characters, such as one sees in the polyglot treatises of the time. Indecipherable for us, they nevertheless attest to the human knowledge of the mage here lost in deep adoration, forehead on the ground and hands joined.

The prophet Isaiah wrote: Nations will walk to your light, and kings to the brightness of your dawn. (Is 60.3). As a confirmed painter, Brother Luc knew how to put light at the service of his didactic project. The light or the lights? First, very discreetly, appears the light of this world, the one that punctuates the days and the nights, on the left at the top of the painting. The day breaks: how pale it appears in contrast to the star of dazzling whiteness which occupies an eminent place! The spectator thinks of the Gospel verse: “ the star they had seen when it rose preceded them until it came to rest above the place where the child was (Mt 2:9). The light coming from the star comes to designate the little one, but it does not come to him, as if it were stopped by a more powerful light, that of God made child, “Light born of Light, true God born of the true God”. Joy shines on the faces that contemplate Jesus. Joseph, young man[6] which resembles the Christs of Frère Luc[7], designates the Mystery and proclaims it. This child whom he receives and whose steps he will accompany until he is an adult, is the Son of the Most High, the announced Messiah. This is why, with his arm raised, Joseph points to Heaven: The Word became flesh and dwelt among us, and we beheld his glory “.

Christ, Light of the nations, Eternal and uncreated Light, shines in the midst of men. The joy of Christmas shines in Epiphany. May we share it and live from it.

[1] A pupil of Simon Vouet, he entered religion in 1641 and continued to devote himself to essentially religious painting, even if we know of him portraits and a mythological scene (Achilles and Odysseus leaving Scyros). He collaborated with Nicolas Poussin for the decoration of the ceilings of the Louvre. In 1670-1671, he was in Quebec where he left a number of paintings. A part of his works is preserved in Châlons-en-Champagne where he remained for a few years, in the convent of the Récollets.

[2] Matthew indeed does not speak of kings but of magoi, therefore sages, capable of devoting themselves to the science of astronomy. This denomination is also to be related to Ps 71, read on the day of Epiphany: “The kings of Tarshish and the islands will bring gifts. The kings of Sheba and Seba will make their offering. All kings will bow down to him. Since the Exceptions of Bede the Venerable (VIIIe century), we got into the habit of representing them under the physiognomy of three kings from the three parts of the world known at the time (Asia, Europe, Africa). They also represent the three ages of human life (youth, maturity, old age). Thus all of humanity kneels at the feet of Jesus the Savior.

[3] The pattern is original. Is it a reminiscence of the visions of Ezekiel where the man who guides the prophet holds a line and a measuring stick (Ez 43,3)? Here, it may be used to designate the path to follow.

[4] It is not the chosen party in The Nativity preserved in the church of Saint-Michel de Lesneven, nor in The leak in Egypt from La Chapelle-la-Reine (1647), where the Child appears totally naked, captured in full motion.

[5] Gold, frankincense, myrrh: Since the Fathers of the Church, these presents have been the sign of royalty (gold), of divinity (incense) and of death to come (myrrh).

[6] The Middle Ages depicted Joseph as an old man. It is from the XVIIe century that the iconographic model evolves: the husband of Mary will now appear in the prime of life. At the same time and under the influence of Carmel, his cult develops.

[7] See theecce gay preserved in the church of Avernes (95) which presents the same physical characteristics.