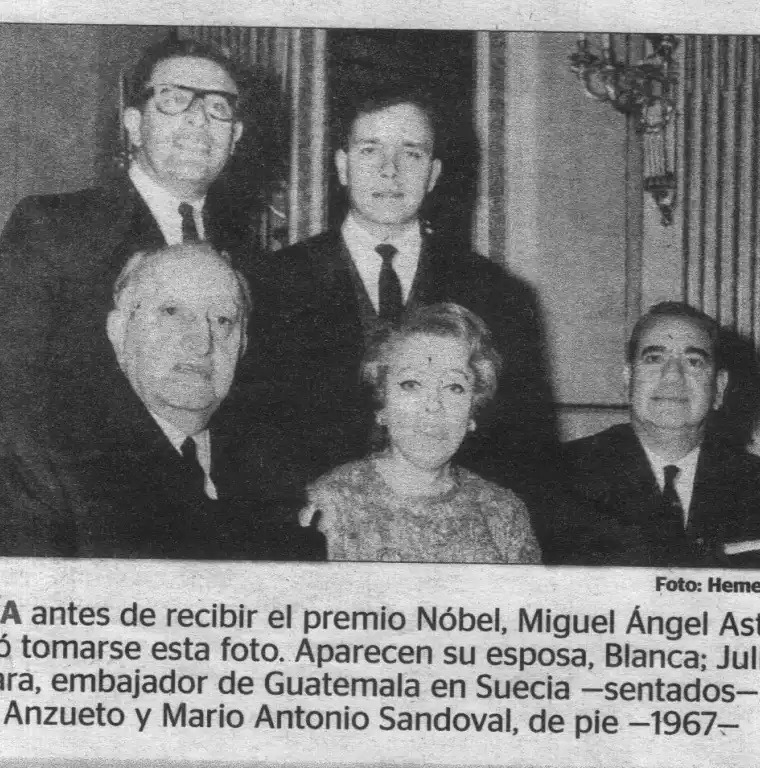 Within a mass of cold tones overlaps the peaceful face of a character with a dark complexion, which, at the same time, is altered with fractions of apparent “b-sides” that reveal the face of a Devil.

The image -painted by the artist María José Rivera- was an idea developed by the writer and journalist Mario Antonio Sandoval Samayoa (1947), with the purpose of illustrating his most recent book: He was beautiful and bad like Satan… Literary figures by Miguel Ángel Asturias (Periphery Series), which was presented on July 27.

The literalness of the cover is unquestionable when contrasted with the title of the book, which was inspired by what is said about Cara de Ángel in Mr. president; that maximum publication that was worth Miguel Angel Asturias a historical recognition that was evidenced with the delivery of the Nobel Prize for Literature in December 1967.

That happened in Stockholm, Sweden, and within the great event with the Swedish royalty, a group of Guatemalans also attended, among whom Mario Antonio Sandoval Samayoa stood out, who was 20 years old at the time.

After the ceremony the then young man did not have much interaction with the writer of Corn Men, but today he remembers him as a “good-natured” and kind person with those who were in the place.

Sandoval, now a journalist and also a graduate in Philosophy and Letters, says that two years before the Nobel Prize was awarded he had read Asturias for the first time. That experience -something obligatory, he shares- allowed him discover new forms in literature.

“I read Asturias somewhat late, when I was 18 years old, and over time I discovered the beauty of their figures. I understood that sometimes you can laugh with him, but also cry. that’s where he is its literary quality”, says Sandoval, 55 years after the brief encounter in Sweden, of which a photographic record remained.

After the Stockholm episode several things changed over the decades. Sandoval studied at the Rafael Landívar University, he explored the language and the possibilities of communication. He began his career as a reporter covering red note and became Deputy Director and Director of Free Press.

Years later, he would twice become president of the Association of Guatemalan Journalists, professor at university assignmentss of journalistic writing of journalistic ethics, as well as arrived at be part of the Guatemalan Academy of Language where he entered after presenting an investigation entitled The Close Gap Between Journalism and Literature.

On the other hand, and in the impasse of those years, Miguel Ángel Asturias continued writing and publishing around the world. The power of his writings sustained an endless connection with Guatemala and also, with Mario Antonio Sandoval Samayoa.

Restore the islands of language

After several decades of experience in the press industry and university teaching, Sandoval Samayoa decided vindicate the idiomatic world of Asturias with He was beautiful and evil like Satan…

The book in question, more than a celebration of Asturias, is a search to connect intergenerationally with people interested in the Spanish languageusing the narrative vehicle of the Nobel Prize for Literature.

In almost 100 pages, Mario Antonio has gathered literary figures, as well as “strange” words but typical of the Guatemalan language, in order to explain them to the readers. This largely corresponds to a urgency tracked by Sandoval for a long time.

According to the journalist and writer, the Spanish language is being “attacked and threatened” by contemporary forms to deal with communication. Examples like the inclusivity in language they are, according to Sandoval Samayoa, “islands” that are distinguished by an “absolutism” that dictates how subjects should be named in society and in textual resources.

“The interest of this book may be defend the language of the attack you are suffering. We are not talking about a good or a bad Spanish, but about one who is full of wealth since, for example, in several countries there may be different meanings of wordsvalidated and real in the dictionary”, argues the author of He was beautiful and evil like Satan…

To get to this rescue guide and language claim, Sandoval Samayoa launched an investigation four years ago in which he did archaeological work trace literary figures and words contained in the publications Mr. President, Men of Corn, Legends of Guatemala and Friday of Sorrows of Asturias.

Another resource used by the author was to ask a group of 50 young people in their twenties who had read the works of Asturias, so that they could locate unusual and misunderstood words; many of which turned out to be part of an everyday Guatemalan language that has been lost.

Hence, the insistence of Sandoval Samayoa to share through this book his research contributions with a group of young people, who assures, they are not always averse to intellectual consumption.

“After teaching for 24 years I have realized that it is false to say that young people are not interested in language, philosophy, or humanity. Obviously, not everyone will be 100% interested, but I think this guide can help you understand more about literary forms”, he shares.

Secondly, He was beautiful and evil like Satan… also draws the possibility of letting more people know about the extensive profile that Miguel Ángel Asturias had. “It is necessary for people to know who it was. There are those who do not know if he was president, archbishop or even a soccer player, ”says Mario Antonio Sandoval Samayoa.

If you are interested in acquiring it, you can request it by email serieperiferia@gmail.com.