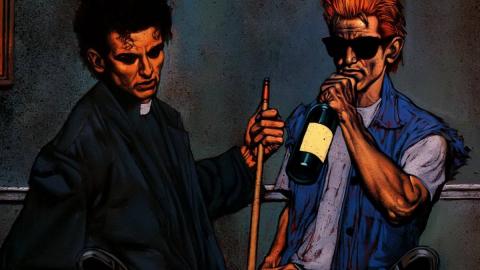 We are humans. And, as humans, we sometimes get carried away by feelings. It is normal. Don’t blame yourself for it. I also miss the summer nights in my town, I miss the conversations with my grandmother (especially the ones I will never have) and I would give years of my life to see again the pug that the damn cancer took from me.

nostalgia is a powerful feeling. On the one hand, it is a reflection of our character. Of what we are, but especially of what we have been. However, it can also be dangerous. It can lead us to do things we regret. To desire things that, perhaps, we do not really want. That is why it is important to manage it correctly.

Today we let ourselves be carried away by nostalgia and we put out a list of comics that we would like to see come out again. A series of franchises, sagas or stories that have been closed, but that we would be delighted to enjoy again. Share yours in the comments!

The preacher comics They are probably one of the best series ever made. Of course, for the present that he writes, it is his favorite comic. And it is not for less, because the narrative that Garth Ennis unfolded was amazing and extraordinary. A story that penetrates your bones and tears your soul.

The return of Preacher could be a double edged sword. At the end of the day, the story is more than finished and, except for a spin-off or a sequel, doing so would be dangerous. However, it has happened TheBoys Recently. Why couldn’t it happen with Preacher?

If we get carried away by nostalgia, a Preacher sequel it would be unforgettable. However, logic makes us think that it would be advisable to leave things as they are. However, who wouldn’t want more good ol’ shit in the purest Garth Ennis style? Well that.

After the success reaped by the Invincible animated series on Amazon Prime Video, the return of Invincible in the comics would be something truly amazing. We do not know if Robert Kirkman has more to tell in that regard, especially after the bombshell that he has been The Walking Dead for popular mass culture.

Nevertheless, Invincible it has aspects that could work really well with readers. The first, a much broader fan base than in its origins. And, secondly, the enormous interest of the mass audience in the superhero genre.

yes in his day Invincible It was a complete success among readers and critics alike, imagine what would happen if Robert Kirkman decided to revisit this universe with an epoch-making sequel. We, of course, would buy with our eyes closed.

Alan Moore’s Promethea It was created in 1999, but ended just six years later. Set in a futuristic New York, this series of comics told the story of Sophie Bangs, a college student who turns out to be the incarnation of a powerful divinity. The purpose of this goddess? Bring the apocalypse to Earth.

Magic, mythology, spirituality, theology, death, science fiction, love, drama, superheroes, fantasy… Promethea comics they have absolutely everything, but perhaps their tone has become “outdated” for new generations, despite having the pen of Alan Moore. An update would probably be in order.

Also, Promethea it would be a “candy” for writers and cartoonists. At the end of the day, it is a truly experimental work, both narratively and artistically. It would give the opportunity to a generation of artists to display a beautifully crafted pictorial spectacle.

Another Garth Ennis title that should be brought to the present no matter what. At all costs. Hitman it was a gift from Garth Ennis, both to the DC Universe and to himself. A wonderful story of friendship, superpowers, black comedy, love and lots of beer. The alcohol runs through its pages faster than the ink itself.

Maybe Hitman It has a humor that is too “old-fashioned”, considering that it is a story that is the daughter of its time. However, if they have managed to get the best out of Amazon Prime Video TheBoysI have no doubt that some new hit man comics they would manage to transfer the spirit of the character adapting it to the current sociopolitical context.

And we conclude with Transmetropolitan, one of the greatest exponents of bad drool, social criticism, acid humor, violence, gore, bad taste and political acumen in the history of comics. The artwork by warren ellis It was considered post-punk in its day, but the truth is that it ended up having something almost prophetic if we look closely.

The transmetropolitan comics they are truly political, but also very funny. In addition, the cyberpunk aesthetic allows us to do tricks and play with reality, bending it to the future and unfolding it in an environment that reminds us of home. Or, rather, what home could be like in a few years.

Let’s get carried away by nostalgia: 5 comics that we hope will return