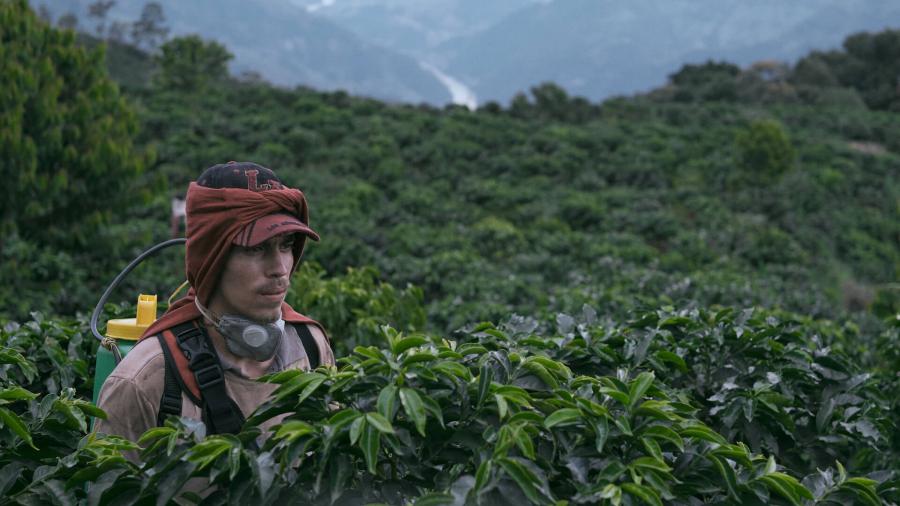 Inspired by the experiences of his first years of life that took place in a small coffee town high in the Andes, marked by childhood memories that he spent touring the coffee plantations of his aunt’s farm, Juan Sebastián Mesa, he decided to write the story that would give life to his second feature film: La roya.

This is how this story set in the landscapes of Southwest Antioquia hits theaters on November 10thanks to the distribution of Cine Colombia, after its world premiere at the 69th edition of the San Sebastián International Film Festival in the New Directors selection, and after being the inaugural film at the 61st edition of the Cartagena International Film Festival in Indies, FICCI.

The film stars Jorge, an unusual character who embodies the reality of many young people who live in the countryside, since he remained on the coffee farm, which he had also inherited, despite the fact that all his childhood friends had left. to the city to seek new opportunities and build a new life.

The arrival of the festivities of the town, and with them the possible reunion with the love of his youth, make him return to an obsession with longings from the past, which arrive at the time of rust, a silent plague that destroys his crops. This is how the party, the music and an encounter with spirituality make Jorge understand that there is nothing left of what binds him to his past and that staying in his land is an act of love and resistance.

“Roya is not a love story, it is rather the story of a disagreement and several defeats. I am interested in capturing the clash between the rural and the urban seen through the eyes of someone who never left for the city and who anxiously awaits his reunion with a now non-existent past. Nostalgia is perhaps the most recurring feeling in the film. A feeling of sorrow for the distance, for the absence of those who left, for what would have been and for what will never be”, explains the director of the film, Juan Sebastián Mesa.

The rhythms of the field

Without thinking twice, Alexander Arbeláez, producer of the film, referred to the unpredictable conditions of the coffee mountains as one of the biggest challenges for the production of this film. “Shooting in rural areas was complex due to weather conditions, muddy roads, landslides, weather, mosquitoes, the sun, we were 50 people living together in this same space,” says the producer.

In itself, the field has its own rhythm and it is complex to alter it, which is why the whole team faced the great task of having to recreate a plague, wait for the exact moment to take advantage of the coffee harvest, record animals on stage , storms and waiting a year, due to the pandemic, to be able to record a guayacán tree to see it flourish and sign the final scene, explained the production team.

Jorge, a man who remains

Juan Daniel Ortíz has dedicated his entire life to working in the fields in southwestern Antioquia, mainly picking coffee, and for the first time in his life he acted in front of the cameras to bring Jorge, the protagonist, to life.

“For me it was a wonderful experience because I have lived things that I did not think I would experience. At the beginning, getting used to the cameras and acting was difficult because the character is complex, it is the opposite side of me, but this was to be able to fulfill a dream that I had as a child but that one day went astray, but here we are already making the first film and everything”, says the protagonist.

Likewise, in the film the actor recreated the reality of how relatives leave one after another in search of a new life in urban areas, even though there is a productive field, full of opportunities that are lost due to the lack of generational change.

“Let’s not lie to each other, if it weren’t for the field, life would be much more difficult. I have lived in the city and in the country, I came to Medellin when my parents died and I grew up there, but I always preferred life in the country and that is why I came back. Most of today’s bald people don’t want to stay, they all want to go out and look for work in the city, most of them don’t like to work because the work is hard, they get bitten by mosquitoes, they hurt their hands, but for me personally it’s It’s cooler to live like this, city life is even harder and more exhausting”, he explains.

La roya is a Monociclo Cine production, in co-production with Dublin Films of France and RTVC, Public Media System. Learn more about the film through the social networks of Unicycle Cinema and do not miss the premiere on December 10.

‘La rust’, a film that captures the agony of a field that refuses to disappear