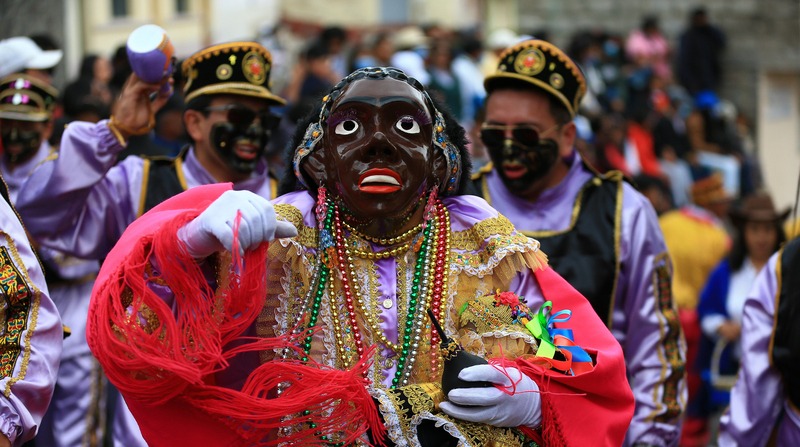 La Mama Negra is the representation of an African character who pays homage to the Virgin of La Merced. Photo: EFE

The tradition of the Mama Negra has been commemorated for decades in LatacungaCotopaxi province.

On this occasion it was celebrated with merriment, after two years of restrictions due to the coronavirus pandemic.

This unique religious celebration in the world, considered as Intangible Heritage of Ecuadorbrings together features of the Andean worldview, Christian syncretism and African culture, in an amalgamation of beliefs and celebrations typical of the multiculturalism of the country.

La Mama Negra is the representation of a african character which pays homage to Virgin of La Mercedwhich also includes the spirituality of indigenous ethnic groups such as the Yumbos, in syncretism with the vision left by the Spanish conquest and the Republican legacy.

For this reason, in the comparsas, which exceed forty, there are unavoidable characters such as the Captain, the Moorish King, the Angel of the Star, the Standard Bearer and the Ambassador, among others.

This celebration arose as an offering to the Virgin of La Merced to protect the city of Latacunga from the fury of the Cotopaxithe highest snow-capped volcano in the world, a colossus whose historic eruptions have been devastating for this city.

This was reported by Luis Chacón, one of the main promoters of the celebration and who disguises himself as Mama Negra to represent the joyful devotion to protective virgin.

Chacón even assured that it was the Mercedarian faith that allowed the coronavirus pandemic to be circumvented in some way, although he recalled that in the past two years the celebration was rather discreet due to fear of contagion.

He has undergone a rigorous process of makeup to dress up as Mama Negra, as well as other characters that are part of the comparsas that go through the streets of Latacunga by dancing, singing and drinking.

Although there are stories that assign to this celebration a meaning of emancipation from Spanish colonialism, there are those who also place it as a representation of the end of the slavery of the black African population and its close relationship with the indigenous communities of the Andean highlands.

Likewise, one of the most heard legends about the celebration, assures that the Virgin of La Merced protected the inhabitants of Latacunga from the lava, mud and rocks thrown by the storm over 120 years ago. Cotopaxi volcano in one of its eruptions, which motivated people to decide to celebrate the miracle with this rite.

The truth is that the representation is rooted in the consciousness of the population and, for this reason, “we live this festival with joy” which, in addition to ritual dances and songs, shines with gestures of solidarityaccording to Chacón commented.

And it is that the comparsas that dance and sing through the streets and squares of Latacunga, also offer mistelas (liquor with fruit juice) to the thousands of curious that crowd the sidewalks.

The citizens and peasants who participate in the tour also prepare large quantities of Traditional foodespecially dishes based on pork, chicken, rabbit and guinea pig, garnished with potatoes, choclos (cooked corn), broad beans and chochos (lupins).

The one on September 24 is not the only celebration of La Mama Negra in Latacunga, although it is the traditional and authentic one, according to Chacón.

On November 11, the Municipality of the capital of the province of Cotopaxi organizes another similar celebration, in homage to the colonial independence from Latacunga.

To the rhythm of the town bands, more than 6,000 people dance endlessly through the streets of this city in the Ecuadorian Andes, in an explosion of colors and sounds that leave indelible marks in the minds of visitors.

La Mama Negra, a rite that returns after the pandemic