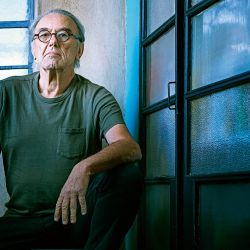 If this note were interactive, it would be enough to click the name of Juan Carlos Kreimer to see his life unfolded like parchment: the first biographer of punk in Spanish, creator of the spiritual magazine “Uno mismo”, cult author in more than ten countries with the essential “zen bike”editor for decades of the 132 volumes, half comic half text of the series “for beginners”, in the ’80s a follower of masters from the East such as Krishnamurti Thich Nhat Hanh, and an anticipator of how much countercultural and spiritual current came from this side of the world.

At 77, Kreimer is much more than a survivor: he is, by now, a wise man. So wise that he put words to a phenomenon, until now, impenetrable: that of creativity. He didn’t gather tips and recipes to be creative. For him, it would have been a piece of cake. No sir. What he did was ask himself vital questions: where does the artistic inspiration come from or, also, the spiritual aspiration? How is it that some people find creativity easier than others? Why did Bob Dylan compose like an old man at 17? And he gathered his conclusions in “The artist as a spiritual seeker”, an essay that, instead of appealing to neuroscience to determine where the creative spark occurs in the mind, turned his own vast experience, and summoned creative poetry, art and astrology to shed light on the mystery. We could say more things, but here we have it Kreimer, jean shirt, brushed hair, wide library from end to end of the wall, with a morning look, and round glasses à la Lennon, sun and yellow and autumnal trees spilled over the shoulder, background music of cold birds. Better not make him wait.

NEWS: After reflecting so much on creativity, what conclusions did you draw?
Juan Carlos Kreimer: Creativity is linked to an attitude: expressiveness. Many times we do not allow ourselves to express what we want. They prevent us from telling ourselves what we perceive. Creativity makes moving elements that were scattered. Expressiveness has to do with what we receive and what we have recorded in our cells, and with taking it out. Being with capital letters seeks someone to express it. Many creative people have the trait in common that they allow themselves those spaces of expressive freedom. In my book I mention two concepts. The one of the inspiration that etymologically means influence of the spirit. It is that mysterious gust that introduces the rational man into the field of the unknown. And that of aspiration: the sensitive man’s response to the call to connect with the deepest and highest aspects of himself.

NEWS: What creative similarities have you detected when interviewing a former priest poet, an artist and even an astrologer for your book?
Kreimer: None of them are afraid of not knowing. They are familiar with that zone of ignorance, that open sky that is a fertile field for creativity. And on the other hand, they do not want to find. What they enjoy is the search. Is not that

the painter wants to achieve a painting. He loves to paint.

NEWS: Can you teach to be creative?
Kreimer: If you help people learn to let go, to express themselves, it can be taught. But they are not recipes. The most important thing is to get out of linear thinking, cause effect. In the creative process, everything that is usually disposable may want to show us something. In everything that we do not see when we look, there are symbolic aspects wanting to manifest themselves. All mental permissiveness that takes us out of our usual reasoning can throw a signal.

NEWS: Why is there creative block?
Kreimer: They come from fears. It is fundamentally about the fear of exposing ourselves and saying what we really perceive. In this life it is more comfortable to mask, than to be authentic. On the other hand, we must remember that human beings are designed to “protect” ourselves from any excess of information that could destabilize our beliefs. In order to produce a greater register in sensitivity, something has to be disorganized and destabilize our rational component. Artists, like mystics, allow themselves to lower the defenses that protect them and thus access new understandings of what they already understood.

NEWS: In his book he talks about a membrane capable of capturing the imperceptible. How is that?
Kreimer: In the human condition we have the known parts: mind and body. However, there is an energy that we know exists but not through reason. Between the two, there is a point of contact. Some call it soul. other consciousness. This function that connects both worlds is like a membrane where the divine nature prints its messages. To access that, a lot of receptivity is required. Hearing that voice makes you more creative. On the spiritual path, it is said: “the call”. It is almost a doing without doing, wu wei for Taoist philosophy and Zen. Thanks to that membrane, words that carry deeper meanings that transcend us emerge. It is not true that the artist creates out of nothing. He is a medium between what he perceives and what he expresses. A bridge between worlds.

NEWS: Who was the most creative person you met in your life?
Kreimer: Many. To Thich Nhat Hanh, the Zen monk, who I not only met but edited his books. I was its first editor in Spanish. I saw Krishnamurti once in California and he impressed me. I can also name Claudio Naranjo, who helped me connect the psychological with the spiritual. Luis Alberto Spinetta, Patti Smith, Marina Abramovich, John Berger. They all had that active membrane.

NEWS: Were the punks you met first hand writing your story in London creative or merely reactionary?
Kreimer: On the one hand they were reacting and they were also creative.

One of the premises in my book is to replace the “or” and put the “and”. The fantastic part and the shade. Security and insecurity. That inclusion opens the pores of the membrane.

NEWS: Will machines be more creative than us in the future?
Kreimer: The human being will always be more creative than a machine. For the machine cannot express the strength of the soul. It has very up-to-date algorithms but they don’t know unpredictability. The algorithms do not know what will happen after death. I had two sudden deaths. No algorithm could have said that he was going to stay alive and write books.

NEWS: Do you miss the days directing Uno mismo, the first Spanish-language spirituality magazine?
Kreimer: “Oneself” was a school. I came from punk culture and counterculture, but then I discovered that if we didn’t change everyday life, we were repeating old ways of being but in new contexts. I started to change my relationship with everything. He had lost his fear. I learned there to write, to edit, to take the best of others. But missing that time, I don’t miss it.

NEWS: In the future that comes, if we are not creative, do we not survive?
Kreimer: If we don’t adapt creatively, without fear, with confidence, with the awareness that we are not the center of the universe, we are going to be in trouble. On the other hand, probably the answers we have today will not serve us for the world to come. We must ask ourselves: where we come from, where we are going, who we are. And the power of these fundamental questions flees in terror from rational answers. Why did they put us on earth? Are we here to have a good time and nothing more? Or to generate a subtle energy of love and trust? I am convinced of something: we came here to make this a better world. And we will achieve that by being more creative every day.

Juan Carlos Kreimer: “We came to make a better world”