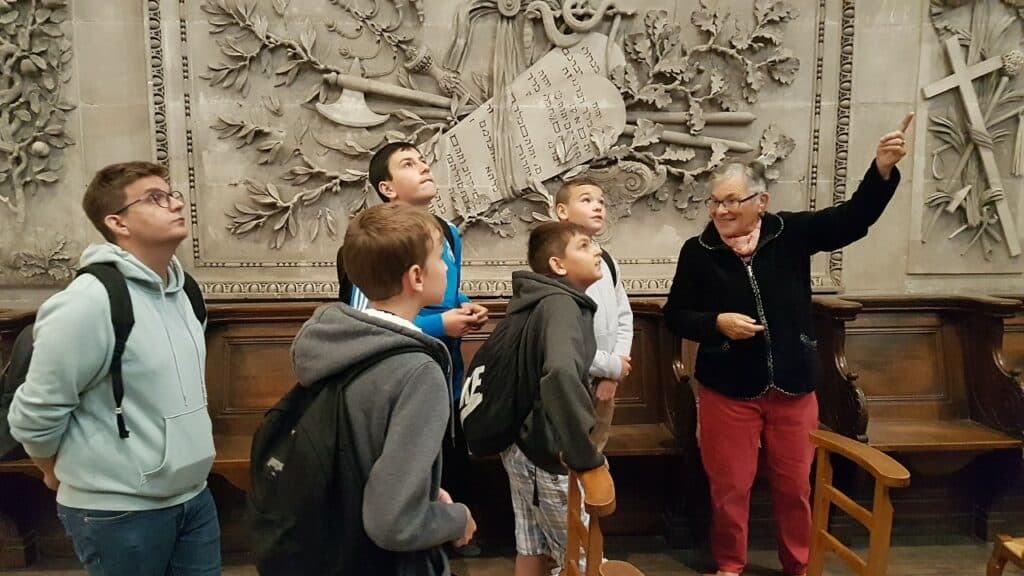 RELIGION. The Catholic diocesan team has maintained relations with those responsible for the Muslim faith for years. What can be said between these two quite different religions? Taner Özcan and the diocesan team of Saint-Dizier recount the content of their working sessions.

We cannot say that they are culturally close. And yet, in Saint-Dizier, the Muslim and Catholic religions maintain very good relations. So much that the diocesan team and Taner Özcan, secretary of theTurkish Cult and Cultural Association (ACCT)organize meetings to get to know each other and set up projects together, like the last Heritage Days.

The initiative comes from the Catholic Church. “In 1973, the National Service for Relations with Muslims was created. The bishops have delegated to the diocesan teams the mission of establishing a relationship with the Muslims. In 1998, it started in Haute-Marne, with a first meeting at the Turkish mosque of Saint-Dizier, because the majority of Muslims were located in the north of the department.Bernard recalls.

The primary interest of these meetings is to initiate Catholics active in their parish to Islam, in order to better understand the evolution of society. “We are trained in this religion, the Koran, the life of Muslims to know how to respond to events such as weddings, baptisms. For example, what should we do when the couple is Catholic and Muslim? »explains Agnès.

It is also necessary to know how to be present during tragic events. “At the local level, we are the Catholic representation and we need to be trained to be able to react together with the Muslims”, she recalls. And to quote a recent case: “A Muslim girl has died. She was very loved by the people, we were asked to say a prayer for her in church. We lived something strong together”.

Obviously, one cannot help but express the idea that this dialogue also makes it possible to avoid tensions between a religion which is losing its vigor and the other which is gaining in power. “This is not the primary goal, we are not in a political process. We have more relations with the association than with the imam”, warns Agnes. Comments added by Taner Özcan: “It’s interesting to show what we’re doing, but religion shouldn’t be politicized. It must not become like that in Saint-Dizier”.

Anne-Marie brings a nuance: “It’s true that what we do allows us to break down barriers and tensions. People are trained in this context. We have the same Creator, we are brothers, we have to understand each other and live together. The dialogue takes place on several levels. We often go to the Vert-Bois market, we talk about everyday life, always with an anecdote about faith, and always with respect..

A logical agreement for the ACCT

On the side of the religious and cultural Association, we feel a less strong demand for relations, the secretary of the ACCT constantly mentioning discretion. “When there are no projects to carry out, I don’t really see the point of meeting. There is no specific need to show our ties, we are not at war.he admits, acknowledging however that “It’s good to create a link between different cultures and religions. But my main goal is not religious. I want to demystify places of worship, knowing that religion is practiced in discretion”

Precisely, the projects make it possible to concretize this beautiful agreement. A few years ago, for the Festivity, Muslims were offered to participate in this festive event. Then, an exhibition followed during the month of Ramadan and the Heritage Days. Events that fill Taner Özcan, especially since his Turkish Religious and Cultural Association is struggling to inspire ideas. “There are a lot fewer of us than in the diocesan team, so it’s complicated”he said.

No worries, the members of the diocese like to take initiatives. “We are going to do better for the organization of Heritage Days 2023. We would like the schoolchildren to go to the mosquee El-Fath (the other Bragarde mosque, editor’s note) and at the Sainte-Thérèse church. This is just the beginning, in the years to come, we hope for deeper relations..

Not all Catholics see favorably the position of the diocesan team. “Some people don’t agree at all. They put letters in the mailbox for us”, says Agnès, with a mischievous smile. However, the community as a whole is more understanding. “They manage to perceive what the other can bring us. When there is mutual trust – it does not happen overnight – it enriches us, and it enriches the Muslim believer”.

Sometimes, contact with the Muslim religion promotes a return to practices. “Two years ago, Catholics left for Djibouti. Seeing them do this, these Catholics returned to their religion.”recalls Anne-Marie.

jm | When Catholics talk to Muslims

Panettone purists say chocolate and cherries are fine
Without stigmas: four former Big Brother participants who managed to detach themselves from reality
"In Spain there is a great ignorance of contemporary art and architecture"
Tweet
Share
Share
Pin