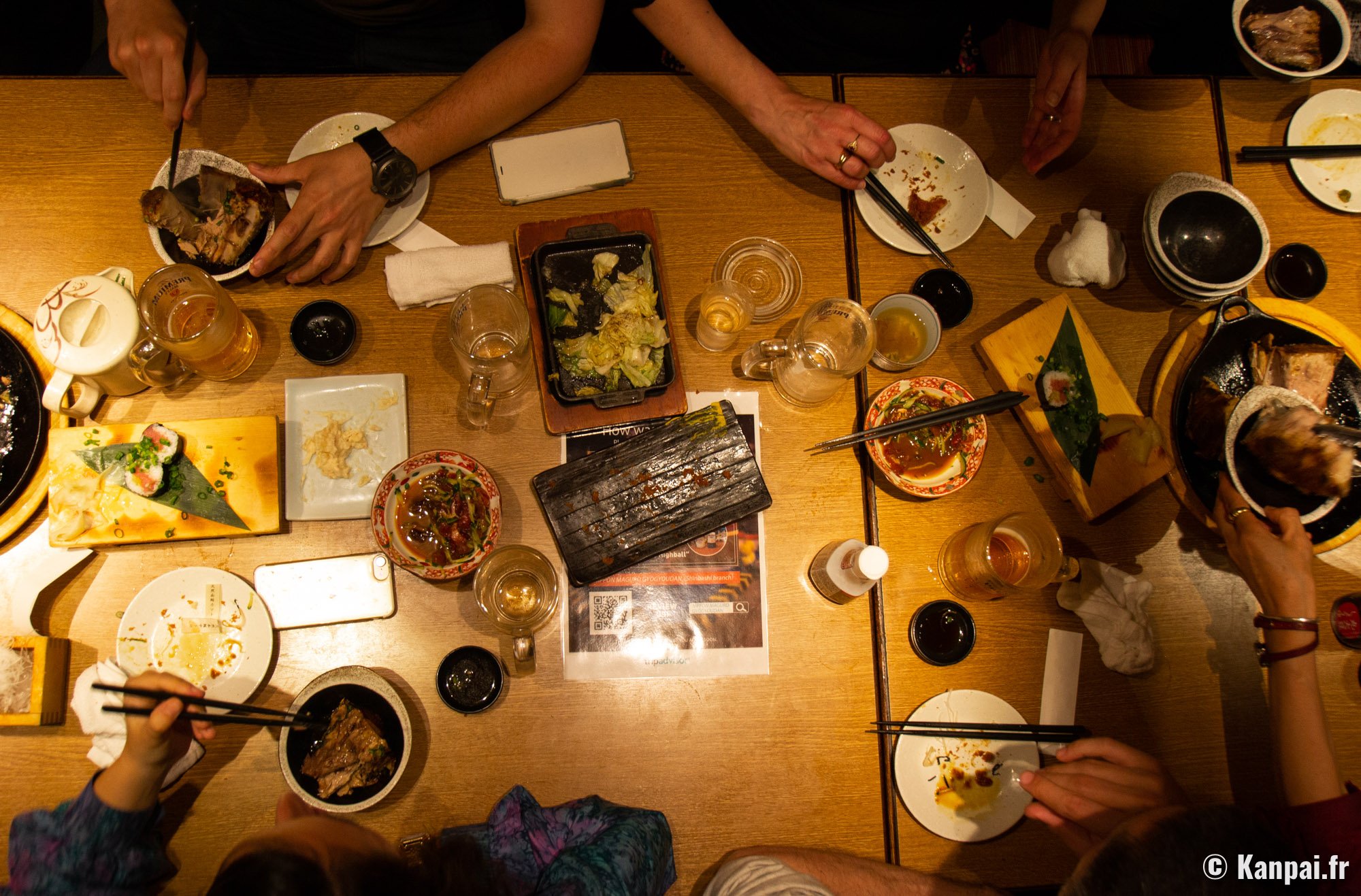 
Add to my favorite places

The reputation of izakaya is no longer to do with fans of Japan and we naturally plan to devote several of our evenings to it each time we return to the archipelago. Test a izakaya is therefore a must for any tourist, a must that will generally remain as one of the best and authentic Japanese experiences. Indeed, no matter how much we frequent French bistros, pubs English or the delicious Spanish tapas bars, the izakaya remain in this universe of happy hour establishments apart, viscerally attached to their territory.

The concept appeared during the Edo period (1603 – 1868) when manufacturers of nihonshu (sake 🍶 Japanese) offer their customers the opportunity to taste their beverage directly on the production site, seated around a small table. The 3 characters kanji which define the word 居酒屋 izakaya can thus be translated as “dine at a liquor store“, a place where you can stay to eat and drink.

Alcohol abuse is dangerous for your health, consume in moderation.

Open only in the eveningthem izakaya welcome employees leaving the office for a moment of relaxation and socialization after work. If the salary men have long been the main customers of these semi-nocturnal establishments, a large population of adults of drinking age (20 years and over) now frequent these bars, whether they are women, students )s or retirees.

Informal meetings nomikai (飲み会), where we meet regularly with colleagues for a drink, are still very popular in Japan. In December they become bonenkai (忘年会), the evenings to celebrate the end of the year, then in January shinnenkai (新年会), to start the new year off right.

Once seated at his table, custom dictates start with a general round of beer 🍺 Japanese where the guests raise their mugs to toast Kanpai! in heart. Then, the choice of drinks and dishes to peck at is legion.

Here is a non-exhaustive list of most popular drinks :

In general, no coffee is served and there are only a few imported drinks on the menu, such as French wine or English beer.

As for gastronomy, we find small typical dishes of Japanese cuisine with :

Sometimes, you can also order some western dishes such as pizza, spaghetti or fries.

What score do we pay at the end?

The izakaya are known to offer affordable rates, from a few hundred yen for a drink or a dish. The portions are generally smaller than in restaurants and the idea is to choose several to share. A menu à la carte and/or with formulas is provided at the start of the evening and you order as you wish by calling the waiter or asking directly at the counter.

Of the table feeswhich we baptize otoshidai (お通し代) or sekiryo (席料), can be charged as soon as you sit down: count around ¥500 (~€3.55) on average. In return, an entry otoshi is served as an aperitif. As often in Japan, there is no concept of tip to be paid additionally.

As for the formulas, we of course retain those at will, the most economical:

A maximum period of time to consume is planned: we generally stay 2 hours with the last order set 90 minutes before closing, all according to a selection of drinks and dishes defined upstream by the establishment.

To pay the bill at the end of the evening, we go to the cash desk with the detailed ticket that has been on the table from the start, or else we have to ask for the bill using one of these 2 propositions in Japanese:

It is common to share equally between all participants and whatever the consumption of each.

The Yokocho alleys around the stations

There exists a eclectic range of Japanese bars across the archipelago: from the smallest boui-boui about 10 seats at the counter, at the strings ofizakaya specialized in hosting large groups through more refined establishments. Of the makeshift terraces, furnished with bottle crates as seats, are regularly installed on the street in the summer. One can also choose a site decorated in a traditional way with low tables placed on a tatami floor and for which you have to take off your shoes and store your pair in a shoe locker.

You can easily find the izakaya gathered in the few so-called alleys yokocho around stations. These real “thirst quarters” come alive at nightfall, dressed in their many lanterns 🏮 red and other bright signs that attract passers-by looking for a good place to sit down and chat. We appreciate the promiscuity which promotes exchanges and allows tourists to taste the local way of life of the Japanese.

Tokyo displays several yokocho well known and typical, such as:

In Kyoto, and in addition to the surroundings of the JR station, we visit the picturesque alley Pontocho as well as along the Takase Canal on Kiyamachi-dori. On the Osaka side, we discover Hozenji Yokocho in the famous district of Namba.

Without being limited to these first addresses, there are at least one izakaya in every Japanese citynear the main railway station or near the fishing port for smaller and remote islands such as Okinawa.

Note that the sector has been hit hard by the Covid pandemic 🦠 with the closure of bars and restaurants during successive states of emergency. Since April 2020, smoke in the izakaya is normally prohibited ; some establishments continue to allow smoking if they have a separate room provided for this purpose.

Andor is a whole new side to Star Wars, but does it tonally work?
"No haber ayudado a mi hermana a morir es de lo que más me arrepiento en mi vida"
The guayabera, Cuban Heritage, in the creative ideology of Jordi Leal
Tweet
Share
Share
Pin