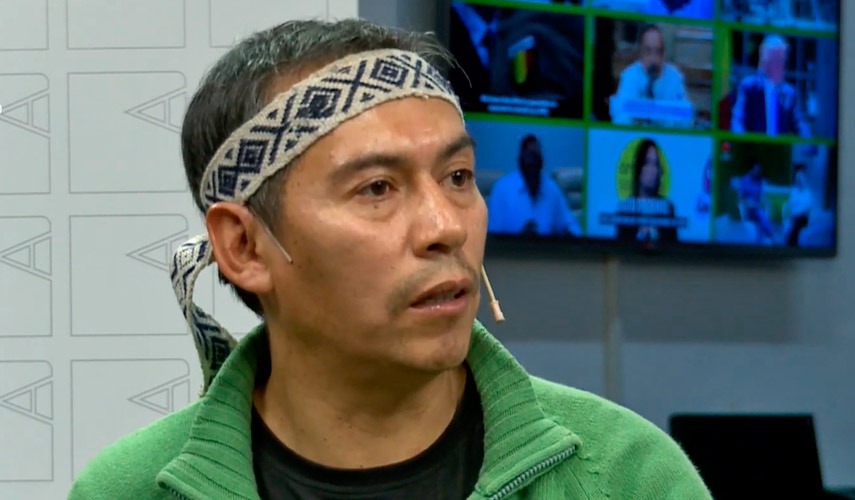 Open Channel Editorial Office | This weekend, November 12 and 13, The Parliament of the Mapuche Tehuelche People of Río Negro meets in Bariloche. The context is that of the conflict as a result of the territorial recovery of the lof Lafken Winkul Mapu in Villa Mascardi, their recent eviction and the arrest and prosecution of several women from the community, and all the repercussions in the media, politics and in the daily life of these neglected communities that seek reparations that the Constitution recognizes and the states refuse to provide.

“The situation of militarization and judicialization of the same organization, because we are denounced in the federal justice system, led us to consider a new parliament, this is the third one we have held this year. We were thinking of doing it in Fiske Menuco (the city of General Roca), but given the circumstances we planned to meet in Bariloche”, he says in communication with open channel Orlando Carriqueowerken from the Coordinator of the Mapuche Tehuelche Parliament provincial.

Much of the nearly 160 communities that make up the indigenous organization in the province will meet in the tourist city. “Parliaments are places for community and collective discussion and decision regarding different issues. A central theme is extractivism, mining projects. We are concerned about the intention that the Calcatreu project –gold and silver deposit located 60 kilometers south of Ingeniero Jacobacci, and concessioned to the multinational Patagonia Gold Corp–, start operating from December when there is a precautionary measure since 2005. And there are other mining projects, the same as the green hydrogen project, with which they continue to insist. All these projects are in community territory, like the Néstor Kirchner gas pipeline that has to go through the communities with which there must be a process of free and informed consultation so that the communities give, or not, their consent (as established by ILO Convention 169)”, highlights Carriqueo.

You may also like: Río Negro: “The arrival of the mining companies is a new stage of the Desert Campaign”

“The judicial progress of recent weeks on the communities, with several trials that have been reactivated, worries us quite a lot.” The Mapuche referent also made reference to a case initiated by Ricardo López Murphy and Patricia Bullrich at the request of lawyer Nicolás Suárez Colman, a local leader of the United Republicans, a character who was able to publish images on his social networks firing a gun and warning the Mapuche communities. In it, Nehuen Loncoman, president of the CODECI, the werken and some communities of the Mapuche Tehuelche Parliament and other community leaders are implicated as members of the non-existent –except in the fantasies of right-wing judicial and media operators– RAM (Ancestral Resistance Mapuche).

Is the territorial survey reactivated?

In recent days, with the excuse of appointment of Alejandro Mormoni as the new president of the National Institute of Indigenous Affairs (INAI), the provincial government promoted an approach to resume the territorial survey of indigenous communitiesparalyzed for years and had almost no progress in the province.

According to official sources in Viedma, the provincial government minister, Rodrigo Buteler, contacted Mormoni, who previously served as INAI Chief of Staff, to “express the will to resume the dialogue instance” that leads to the signing of a new community survey agreement, as provided by law 26,160.

From the Mapuche Parliament it was pointed out that it is not the first time that the government has made these threats, and that they hope that these sayings become realities. Carriqueo pointed out that there is a debt of years with the fulfillment of the national law and that in the province only the “folders” (process of survey and recognition of the ancestral occupation of the land) of some 60 communities have advanced and there are more than 100 without relieve.

“We, in principle, distrust. It is not true that she has communicated with the INAI president. They have submitted a note that was sent four days after the eviction of Lafken Winkul, in a context of advancing extractivist policies of the State on community territories, together with judicial progress. It seems to us that this marks the hypocrisy of Buteler to speak as if they were really willing to move forward with 26.160. This government, in these three years, never had the true intention of carrying out the survey”, expresses the werken.

Since 2013, the survey has made no progress. In a first stage, when the responsibility for execution was in the hands of the indigenous organization, the largest number of surveys were carried out, but the new governments stopped progress. “The 26,160 in any case does not solve all the problems of the communities, there are other conflicts such as ill-gotten titles –as in the case of the lof Antual Albornoz– that have not been resolved despite the complaints that are still in the Prosecutor’s Office of State. Law 2287, the Integral Indigenous Law in the province of Río Negro, has tools that are available to initiate an investigation process”.

“We hope there are no stones or Mapuches on the road”

This phrase was launched at the 28th Industrial Conference of the UIA that was held in Parque Norte on November 9, by Javier Madanes Quintanilla, president of ALUAR and CEO of the FATE tire factory. He did so by referring to the construction times of the Néstor Kirchner gas pipeline and to ensure that the work is completed on time.

Stay calm Madanes Quintanilla, you are going to find stones and many Mapuche who are going to demand a Free and Informed Prior Consultation!! get ready

Madanes Quintanilla on the gas pipeline: We hope there are no stones or Mapuches on the way

“There are quite a few Mapuches. First they are going to have to talk with the communities before thinking about the gas pipeline, it is that simple. Surely there are going to be many Mapuches, because they are community territories through which they want to pass,” answers Carriqueo upon learning of the industrialist’s statement.

In order to move forward with works that impact the lives of indigenous communities, our country, a signatory to ILO Convention 169, is obliged to carry out the process of Prior, Free and Informed Consultation communities to obtain their consent. “The consultation mechanism is an interdisciplinary work, we have experience in other consultations such as the Cerro Alto wind farm, also in Islote Lobos -where a National Park was created- and other projects. It implies, first, an anthropological, historical and social analysis of the community, which marks the way of life. Territorial losses of the communities almost always appear. Then see the cultural impact, what is the impact that it is going to have on the philosophy of the Mapuche people that has a spirituality, what is the degree of affectation to that spirituality. Generally, environmental impacts are made, but a cultural impact study would account for another perspective”, explains Carriqueo.

The process continues with the participation of all the families in meetings, where the communities receive information and then in their own meetings where they analyze, study and internalize the subject. “We are looking for someone who gives us another bell than what the company says. From there, it is resolved or is resolved; It is not a meeting where they raise their hands and that’s it, it is much more complex”, concludes the Mapuche werken. We have to tell Madanes Quintanilla to wait calmly.

In the face of criminalization, the Mapuche Parliament meets in Bariloche