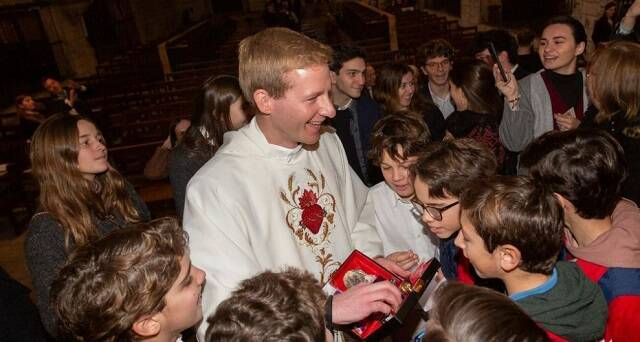 This Saturday the legionary of Christ was ordained a priest in Barcelona Marcin Jablonski at a celebration presided over by auxiliary bishop Javier Vilanova in the Pedralbes monastery. This 32-year-old Polish young man had 13 years of training and was ordained a deacon in March of last year in the crypt of the Sanctuary of Saint John Paul II in Krakow.

“Priests are not bitter singles, hahaha…! But fruitful parents, who engender a life in the souls of people, eternal life. I am very moved by this dimension of the priest, it is an enormous responsibility but, at the same time, a profound joy of being able to be the face of God the Father here on earth for his beloved children”, he explained in a interview with Lo+RC shortly before being ordained a priest.

Currently, he carries out his work in Barcelona and is mainly focused on young people both in ECyD youth groups and in one of the schools that Regnum Christi manages in the Catalan capital.

With a great sense of humor, the already father Jablonski answers why he decided to be ordained in Barcelona: “Robert Lewandowski asked me. Hahaha it’s a joke! I was discerning it for several months. I wasn’t sure which place is the most suitable. There was also the option of being ordained in Rome. But through various factors, the Holy Spirit has indicated to me the city of Barcelona, ​​my current place of mission, as the best place for ordination. I want to share it with the people with whom I live, work daily, with the young people and adolescents that I accompany at school and at ECYD”.

In fact, the mere fact that he ended up serving in Barcelona was already a surprise for this Polish priest. But he assures: “I love letting myself be surprised by God!” “Right there is where we lose control of our plans, it is where He acts with more force. I am learning a lot in the town of Barcelona. Not so much at the level of vocational discernment, which has been completed for years, but in terms of the wonder of sharing Christ with souls that are so thirsty for Him”, he explains.

His family was initially surprised by his call to the priesthood, but they saw it as a good thing. Marcin explains that his parents and his two brothers saw him as “a blessing to the family” and supported him from the start. On his part, his sisters had a harder time accepting it. “They didn’t want to let me into the seminary! But after a few years, seeing me happy, they said ‘OK!’, hahaha”, she recounts.

Regarding his years as a seminarian, the new priest sums it up in one sentence: “God takes nothing away, he gives everything.” As he explains, “throughout these formative years, I have had several defining moments. Always before the Eucharist, in adoration. It is there where Christ with great generosity shows his face and reveals his will to you. I remember very well one night during the spiritual exercises, just during adoration. Contemplating the Cenacle and the Last Supper. It is difficult to explain, but I saw clearly that Christ invited me to wash the disciples’ feet together with Him. Serve as Christ, with Christ, his closest friends. This experience has given me an increasing certainty about the path that God has dreamed for me”.

As a member of the Legionaries of Christ, he experiences the particularity of living in community, something that is key for him. “God does not call some individuals to live the Christian faith. He calls to live it in community. The same, as it has formed the community of the Twelve, or the first groups of Christians. In the Legion we live as apostles in the communities and even more as Regnum Christi, where we share the same charism and spirituality. It is an enormous gift to live the vocation within such an extensive family, each branch with its riches that they contribute to the whole. According to me, in this communion, within the community itself and among the branches, the experience of the charism that God has given us is at stake”.

Throughout this process, he has had people and examples that have helped him at all times. Marcin claims to have been very lucky with his spiritual directors, whom he defines as “true inspiring parents.” Regarding his fellow legionaries, he assures that he has been able to reach the priesthood in large part thanks to them: “In the most difficult moments they were unconditionally by my side. I know that they would lay down their lives for me if necessary. They are for me one of the most valuable gifts I have received”.

Before, but also once ordained, he will continue working with young people and adolescents. What is your mission? “I look for the boys to meet Christ. Point. If I manage to create the environment and the circumstances so that this encounter can happen, God will do everything else, he will do wonders in his life”, he affirms.

“I love being surprised by God!” confesses Marcin, recently ordained a priest in Barcelona

A reflective and spiritual Jhenny Serrano explains the value of humor in health
Pieces from the Gold Museum encourage yoga in New Delhi, India
The delight of visually impaired readers at the large print bookstore
Tweet
Share
Share
Pin