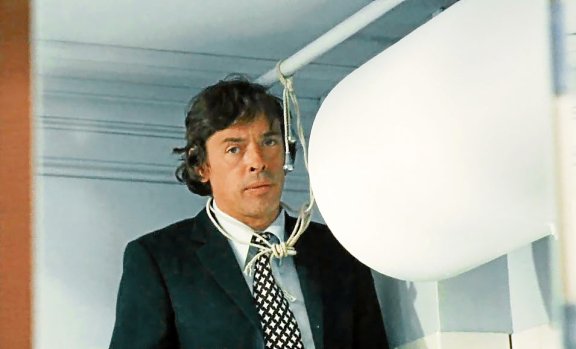 Bad luck for Ralf Milan, hitman of unparalleled professionalism who will fall on the first setback of his career. As he prepares to take down a troublesome witness, he finds himself forced to protect a VRP who risks jeopardizing his mission by seeking spectacular suicide when his wife leaves him.

Francis Veber’s screenplay is well-oiled, however improbable the twists and turns. In 80 minutes, he plunges Lino Ventura and his closed jaw into the greatest disarray in the face of a Jacques Brel determined to… piss him off! The humor and the laughs rely a lot on their mismatched side and, as often with this master of comedy, the “cellar” less stupid than he looks will rebel against the tough guy before falling back into his congenital naivety. A timeless genre thanks to its perfectly composed duo.

Comedy by Edouard Molinaro. On arte.tv until January 8.

Matsugoro, a rickshaw driver, comes to the aid of a little boy and sympathizes with his parents from a very wealthy background. When the father dies, he takes the child under his wing and hides his feelings for the widow, because of his class modesty… The director of the “Musashi” trilogy has signed two versions of this story. Forced to cut the explicit passages on the affection of the sympathetic brawler for the widow of an officer, he was able to restore them in the remake which he shot fifteen years later. Certain scenes with sublime aesthetics are reproduced identically, the color in addition. Two earthy and touching films, thanks in particular to Tsumasaburo Bando then Toshiro Mifune in the title role. There’s something of “The Summer of Kikujiro” in this adoption of heart.

1938. Twenty years after the end of the First World War, Stanley finally learns that he stayed too long in his trench. He can return to America where he is celebrated as a hero. On the day of the first anniversary of her marriage, her old friend Oliver hears the news and hastens to invite her to his house to celebrate these two events. Reaching his apartment on the thirteenth floor will not be a piece of cake, the obstacles being numerous in their path, with many comic misunderstandings that are brilliantly improbable. The tall skinny Stan Laurel and the short fat Oliver Hardy find themselves carried away in a series of absurd and delirious gags which will allow them to affirm their characters… or not! The grumpy mustachioed James Finlayson, their favorite enemy of the majority of their films, is a neighbor quick to fight,

By John G. Blystone. On Arte.tv until March 27.

Nick Cave and Warren Ellis are filmed during the recording of the albums “Ghosteen” and “Carnage”. The songs of a poetry that gives chills, are interpreted in their entirety, sublimated by an aesthetic that delicately underlines their spiritual and emotional depth. Immensely sad, they are nevertheless full of hope as they reveal a love of others and of life. The lyrical voice of the first and the instrumental flights of the second unite in a harmony born of the complexity of their links, creative as well as personal.

A magnificent documentary on grief and the restorative power of music. Andrew Dominick had already followed the duo for the no less moving “One More Time With Feeling” which already bore the weight of the death of Nick Cave’s son which has continued to haunt his work ever since.

Documentary by Andrew Dominik. On Mubi.

Andrew, 22, lives with his mother and stepfather. Struggling, he is hired to set the mood in bar mitzvahs where he gets closer to Domino and his autistic daughter Lola. Love or friendship ?

Cooper Raiff has offered himself a melancholic romantic comedy which is part of this current of American auteur cinema which has become too rare, with protagonists lost at the dawn of adulthood. Screenwriter and director, he plays this charming loser whose noble intentions collide with reality. Naturally good at putting people at ease, he can be off the mark when he thinks he is helping.

The result does not upset the genre and the conductor puts on too much value, but he is generous with the other characters who have their own autonomy, including the pretty thirty-year-old with universal doubts (Dakota Johnson).

Searcher Clade became a hero when he discovered a source of saving energy during a mission that saw his father, a great explorer, disappear beyond the mountains where they live reclusively in spite of themselves. Twenty-five years later, he sets off again on an adventure when the source seems about to be extinguished…

The strengths of this family odyssey are the wondrous “Flash Gordon” setting and a narrative with no real villains but with loved ones divided by their divergent solutions to the same problem. Entertaining, despite the highlighting of current issues, ecological (how to reconcile respect for nature and technological revolutions) and social (racial diversity and homosexuality), even if it is surely a step towards a more subtle reflection.

Films, series, documentaries… The good picks of 2023 on the platforms