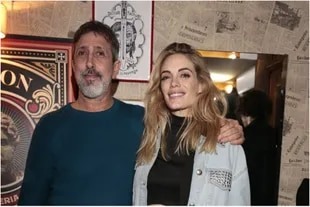 They met recording a hidden camera of video match, 18 years ago. And although it was not a crush, they had chemistry and began to frequent each other, they became friends and fell in love. Emilia Attias and the Turk Naim Sibara they are 21 years apart, but that difference is just a detail in this couple who married three times, have a 6-year-old daughter, do not believe in polyamory but do believe in freedom, and have never gone through a crisis, at least publicly .

“We were doing a hidden camera, pretending to record the second season of tumberos, where we made the girls very uncomfortable. And one day Emilia came. Martín Bossi, who was dressed as a transvestite on the scene, wanted to pick her up, brought her food, walked her around the prison, was very helpful. I remember I told him that if he picked it up dressed as a transvestite he would make a monument to it. We talked for a while and Emilia told me that she was going to have a party, He asked me if I wanted to go, and gave me the phone! When Bossi arrived, it was already late. The less you look for something, the more it comes to you. Everything magically happened”, El Turco once told in Divine Comedyon Telefe.

The version of the actress is very similar. “We had already met a few times at events and we looked at each other, but we never spoke. But in this hidden camera we do chat. It was a very nice way to get to know each other and at the same time a little strange, bizarre”, recalls Attias on television programs, when talking about love. “At that time, those very old-fashioned things were done and I remember that I was upset on the one hand, and very entertaining on the other. We connected and started seeing each other, going out to eat with friends, going to meetings. Strong and intense loves have their stories too, ”he added. “I don’t know if mine with El Turco was love at first sight, but I do admit that there was chemistry from the first moment and it was very beautiful. It didn’t take long for us to discover that we have the same values”.

They were married in December 2009, in Arraial D’Ajuda, in northern Brazil, where Sibara’s brother lives. It was an intimate ceremony in the church of Nossa Senhora d’Ajuda, with a party for family and close friends. On that date they also celebrated their second wedding, but this time on the beach, under the Umbanda rite, with offerings of candles, flowers, letters and food, all in a small boat and in honor of Iemanjá, the goddess of the sea. “I am a very spiritual person and for me it was important that we get married in a spiritual framework, together with the people we love and love us,” the actress said at the time. The third wedding was a few days later, in Buenos Aires, by civilian and with a party for 200 guests.

Seven years later, in 2016, Gina, the couple’s only daughter, was born. “Our romance is already like a myth. Ours was given naturally and we do not weigh at all to be together all day. We formed a family and we never forced anything, everything was given to us”, Says the comedian when asked about his love story. “We got married civilly and by church, and we had three parties. In the civilian we invite 200 people. At one point I got tired of being asked if such a person was on the list and I said: ‘let anyone who wants enter,'” she said in the suckersfor America.

In that same interview, the actress and model assured that with her husband they have a very harmonious relationship: “In our couple there is respect and freedom, and we do not put spokes in the other’s wheel. We are very companions We really like to share our experiences and also our decisions. I am not one of those who thinks that it is good for the couple to separate. If you’re better apart, there’s something wrong. We are very independent and we both put a lot of energy into work, and if that takes us to be apart for a few days, we live it as something else. But if we are together, it is much better, and we celebrate it”, Attias confided to THE NATION.

One of the pillars of the couple is trust. “We have been together for many years and there were no lies, at least discovered. We are also not fanatics who are chasing each other. We are not constantly aware of where the other is or where he went. We have freedom, but we are far from polyamory. I don’t know if my head is so open”, Sibara was sincere in a note. And on that subject, she says: “One goes through moments in which you don’t find yourself, which is the most natural thing in the world. But I can’t imagine without him. The crises are carried until they are fixed or cut. We have an excellent coexistence and we get along very well. Ours is a couple that flows in harmony. Obviously, throughout all these years we have had to accommodate some issues, but we were never at odds and I think that is key”.

Attias says that the Turk is very romantic and always in a good mood. “Not the humor that people know him. I think everyone thinks that he is a very nice and funny person and he is, but what amuses me the most is his acid humor. He has a pretty strong black humor that I love. He is a very intelligent, educated, highly intellectual man with a deep inner world that completely made me fall in love”.

In addition to life, they share work and are partners in three bars in the Nuñez area: Poe, Cadillac and Corazón informer, which opened its doors a year ago. Both take care of each other and cover each other when the other has to record or theater performances.

Emilia and El Turco took their time to think about whether they wanted to be parents. “We were alone for 12 years before we had Gigi, so today we’re kind of smitten with family life and love making plans together. Perhaps it also has to do with the fact that she is a very special girl and she has a great time if we take her to an art show, for example. But every once in a while we go out just the two of us and go to the theater or see a band”, says the actress.

When Attias did Rest of the world, for eltrece, he traveled as a family: “My daughter accompanies me on long trips and if Naim can, she also joins in because we are very companions, and we like to spend time together. I am not one of the people who believes that distancing is good for the couple.

Emilia Attias and the Turk Naim Sibara: a hidden camera, 18 years of love with freedom, three weddings and a daughter