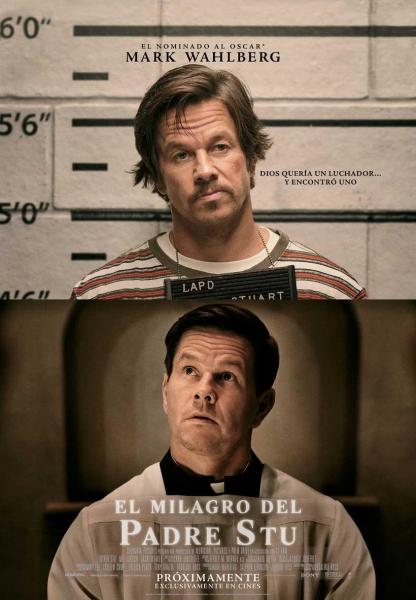 The reviews of Daniel Farriol:
The Miracle of Father Stu

The miracle of Father Stu (Father Stu) is an American drama written and directed by rosalind ross that tells a true story about Stuart Long, a boxer-turned-priest who inspired countless people during his journey from self-destruction to redemption. It stars Mark Wahlberg (Spenser: Classified, Oil Slick), Mel Gibson (Panama Mission, The perfect mugger), Jackie Weaver (The Bloom Family, Never Too Late), Teresa Ruiz (Dogs, Noise), Annet Mahendru, Winter Ave Zoli, Ronnie Gene Blevins Y malcolm mcdowell. The film was released in cinemas in Spain by the hand of sony pictures on May 13, 2022. Now it can be seen on platforms such as Movistar+ either Rakuten TV.

The Miracle of Father Stu is a well-intentioned religious drama that is inspired by the real life of Stuart Long, an anti-Christian boxer who, after suffering a traffic accident that almost cost him his life, would end up becoming an influential priest in the Montana Catholic community. At the same time, he would develop a strange degenerative disease that would leave him forever confined to a wheelchair, which would not undermine his convictions. the new director rosalind ross turns the story of this man into a film of more than two hours that follows the routine parameters of a biopic With a television format, the only exception is being able to count on a brilliant cast that gives the whole a certain packaging.

The film approaches faith and spirituality in a somewhat superficial way in order to cover both a believing public that finds sufficiently enriching material in history and that other public of recalcitrant atheism that would suffer from skin rashes before a catholic pamphlet. That is why the script allows itself various dramatic licenses to put the character’s biography in images that harm the credibility of the redemption and reconversion process that the protagonist will go through. Even so, surely the most devout public will find a film to their liking here because of the family values ​​it defends and because of that whitewashing vision it has of the Church as the centralizing institution of the Christian faith.

The boxer who traded his gloves for the priest’s habit

The “miracle” referred to by the Spanish title of The Miracle of Father Stu it is nothing supernatural nor does it require divine intervention, it is the spiritual transformation of a man. Stuart Long (Mark Wahlberg), known amicably as Stuwas a wild cannon with a sarcastic temperament who came from a humble family with separated parents, Bill (Mel Gibson) and Kathleen (Jackie Weaver), which conveyed their anti-Catholic sentiment to him. During his university years he excelled in sports such as wrestling, American football and boxing, the latter he was so good at that he thought of dedicating himself to it professionally until he suffered a jaw injury that forced him to retire. We are, then, before the story of overcoming someone who had to reinvent himself several times despite the obstacles that life put him and that would do nothing but strengthen his faith even more.

After leaving boxing he wanted to become a Hollywood actor, but his success was reduced to appearing in a couple of commercials. His turning point came at the age of 31 when he was hit by two cars while riding a motorcycle, which drastically changed the course of his life and made him rethink the beliefs he had until then. A great influence was the young catechist he fell in love with, Carmen (Teresa Ruiz), who would bring him closer to a Catholic doctrine that he had always rejected.

After spending 13 years of his life receiving Christian formation, he was ordained as a priest in the Cathedral of Santa Elena at a time when he had already been diagnosed with myositis, a degenerative muscular disease that would ultimately leave him confined to a wheelchair, without that prevented him from saying masses in his busy parish. In essence, everything in the movie is true.

Works better on lightness than on transcendence

The Miracle of Father Stu It has a rather light-hearted first part that focuses on the misadventures of a young Stu fighting in the ring and dreaming of becoming famous in the movie mecca. In parallel, we are shown his growing interest in Carmen, which will finally connect him with the ecclesiastical liturgy in a subplot with too many concessions to the classic romantic comedy.

However, during the second half the film becomes more spiritual when dealing with themes such as illness, faith, forgiveness and redemption, although it is during those moments that the director falters with a leaden narrative that flirts with the melodramatic without going as far as to go. never delve into theological issues or deep moral reflections that arise. More than a serious approach to the spiritual transformation of a man, the film ends up being a childlike catechism about the virtues of Christian doctrine that will hardly convince the most agnostic.

Luckily, the good work of the actor Mark Wahlberga fervent Catholic who is not afraid to express it in public, together with other high-class supporting actors with whom he seems to share faith, are the ones who truly manage to strengthen an overly sweetened film that, even though it is full of good and respectable Christian sentiments, would have fallen into disrepute. the most absolute oblivion for lacking the emotion or depth necessary for his speech to transcend all kinds of audiences.

What do you think of the movie?

The Miracle of Father Stu

Criticism | Review of ‘The Miracle of Father Stu’ – Movie