The celebration of the Feast of Christ the King began as an act of reparation and reparation for the annual events -coinciding- programmed by the City Council to reward the most outstanding characters in the promotion and propagation of the aberrant gender ideology.

The Day began, as has become traditional, under the balcony of what was once the Chapel of the Virgen del Pópulo, from where the hosts departed to reconquer the Moorish land and, where now, a few meters away, the statue of the reconqueror dominates of the city, Fernando III el Santo. We entrust ourselves, right there, to his protection and intercession, as a perennial faithful example of what the Spains are. A model of government and dedication to the common good that earned him elevation to the altars.

The large influx of tourists altered the order of the day, so much so that parking difficulties staggered the arrival of co-religionists; which is why the day began with a visit to the city, and more specifically, with a tour of those buildings that housed the protagonists who wrote some of the most vibrant pages of sixteenth-century spirituality, which was carried out by the Margarita Maria Dolores Rodriguez. The old University of Baeza deserved special attention, which at the time rivaled that of Salamanca, where Maestro Ávila imposed the line of action common to all the colleges he founded, as can be seen reflected in the Memorials to the Council of Trent, where he asks the creation of seminaries, for a true Catholic reform of the Church and the clergy. Santa Teresa de Jesús, San Ignacio de Loyola, San Francisco de Borja, San Juan de Dios, San Pedro de Alcántara, San Juan de Ribera and Fray Luis de Granada maintained a relationship with him. We can affirm that with his writings the Spanish mysticism of the Golden Age begins, the framework of Hispanidad.

Punctual for lunch at the Palacio Sánchez Valenzuela y Cerón, the day continues between friendly conversations at the table with Tradition as the common thread, where everyone has taken the opportunity to share their religious and political apostolate in the social sphere in which each one finds himself. But it is no longer what has been lived to where the conversations derive, but to the activities of this course that is beginning, taking into account that there are attendees from Córdoba, Jaén and Granada. So much so, that, after the recent relaunch of the San Rafael Traditionalist Circle (Córdoba), the Southern Kingdoms are present, being aware that the Traditionalist Communion must have a more intense and peremptory activity in our days ―if possible― before the destroyers of every vestige of God and of Spain. Because “it is easy to deliver a crowd into the hands of a few, for for the God of heaven there is no difference between saving with many or with few” (1 Maccabees, III, 18). But as Jean Ouset (For Him to Reign) affirmed, we must have the faith of Saint Joan of Arc, to be able to shout the words of Ezekiel: “many more are with us than with the enemy.”

Given the initial change in the order of the day, it would be during the desserts when the person in charge of the Traditionalist Circle of Baeza, Roberto Gómez, made a brief tour of the biography of the Holy Father Pius XI and the time he had to live, as well as a vision of his pontificate, focusing especially on the different encyclicals with which he condemned the ideologies and their fruits, which still exist today: of Marxism in the “Divini Redemptoris” (1937), of Italian fascism in “Non abbiamo bisogno” (1931) , of national socialism in “Mit brennender Sorge” (1937), of religious persecution in Mexico in “Acerba animi” (1932) and in “Firmissimam constantiam” (1937), of the second Spanish republic in “Dilectissima nobis” (1933) , of capitalism in «Quadragesimo anno» (1931) and the firm defense of the family, already the object of harsh attacks, in «Casti connubii» (1930).

Next, he went on to schematically describe the encyclical “Ubi Arcano” (1922), a true programmatic declaration of what would be his work as Pastor, where he would present an analysis of the pressing problems of the world. He would unite the efforts of his predecessors: St. Pius X’s motto, “instaurare omnia in Christo” (instate all in Christ); and that of Benedict XV, “pax Christi” (peace in Christ), to end up proclaiming in the encyclical “Quas prima” (1925) the “Pax Christi in regno Christi”.

Roberto Gómez highlighted the double source of the kingship of Our Lord Jesus Christ: founded on the hypostatic union and on the right of conquest by virtue of his passion, death and resurrection.

It was indicated that it would be explained how the cry ¡Viva Cristo Rey! And so, at the end of the exhibition, Roberto Gómez described the life and cruel martyrdom of the 21-year-old young man, Antonio Molle Lazo.

The quotes from the “Quas prima” were not left behind, nor from the Chaplain of the Pelayos in the Saluda of the latest issue of the youth magazine PELAYOS, where he collects vibrant words from Monsignor Marcel Lefebvre. 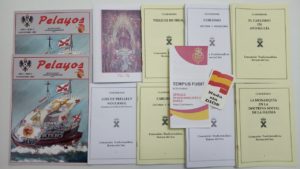 Once the Conference was over, a commemorative Booklet was distributed for this call, prepared by the Traditionalist Circle of Baeza, where the thirty brief points on the dogma of the kingship of Christ and Catholic politics, exposed in the inaugural session of the conversations of The hopeby Professor D. Juan Fernando Segovia, from the University of Mendoza, director of the Center for Historical Studies of the Felipe II Hispanic Studies Council, and who published this newspaper during the month of October of last year.

Already published notebooks dealing with different topics were also distributed among the attendees: Encyclical Libertas, Luis de Trelles and Noguerol, Carlism, Liberalism…; also giving away stickers of the flag of Spain with the Sacred Heart of Jesus. Likewise, number 5 of the Catholic-Monarchist Youth Magazine PELAYOS was given to the pelayo and the young margarita present.

After such a long after-meal, the day ends with a brief tour on the tourist train, which gave a more general view of the city.

At the time of farewell, everyone was summoned to the Christmas Lunch convened by the San Rafael Traditionalist Circle (Córdoba).

The celebration could be summed up, paraphrasing the words of the aforementioned Jean Ouset:

“When you fight for God, for the Country and the King, you are sure to win. Let us love our cause enough so that the joy of serving it may be, if need be, a sufficient reward for us.”

Chronicle of the Meal of Christ the King in Baeza