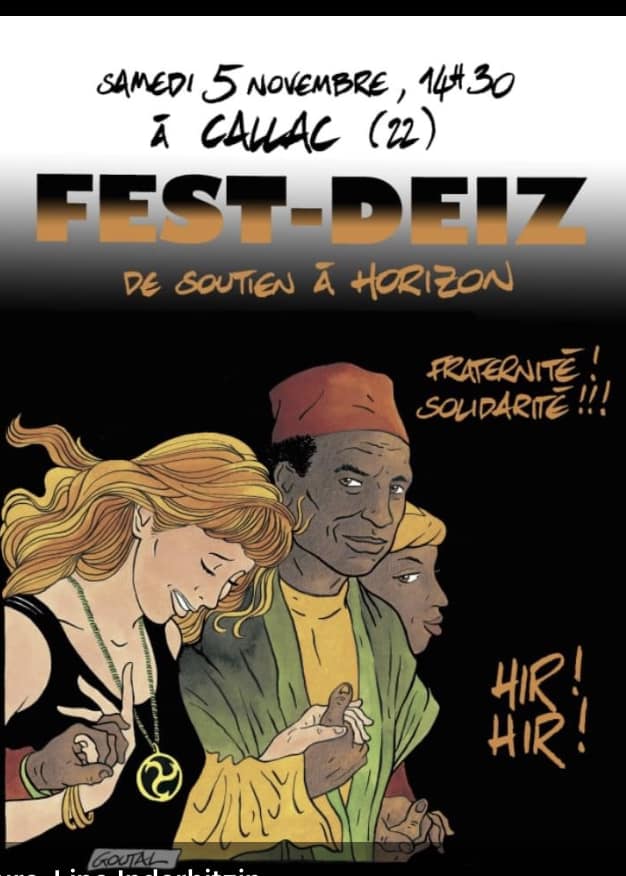 A new demonstration is organized against the Horizon project, and against the settlement of migrants, this Saturday, November 5 in Callac. At the same time, a new collective has been launched, and wants to be parallel to the “Friends of Callac” which tends to add a little confusion in the town. Finally, with the support of the municipality, a counter-demonstration (with Fest Deiz) was organized by the radical far left “antifa” joined by several unions and left-wing movements.

On the spot, the situation has not moved an inch for weeks: the municipality refuses the referendum and wants to move forward in force on the Horizon project – while having largely moderated its speech: thus, there are no longer dozens of families of migrants who are announced as initially, but a few families, including possibly those already settled, and elected officials are seeking to focus on the projects that will fit into Horizon, in particular the renovation of premises to make a center for childminders , premises for associations. It is also a question of architecture, including the renovation of the town under the leadership of student architects – which did not fail to make people smile, including one of the students who came to present his project, slipping that he acted as a homework assignment, and that they therefore simply adapted to the sometimes curious demands of their teachers.

Overall, this desire to talk less about migrants, is it a way of drowning the fish, or is it a real step backwards by elected officials in the face of the scale of the protest? Reply soon.

The Viltaïs project, led by the State, is in the process of becoming a reality, the authorities of the French Republic clearly having nothing to do with the opinion of their rural citizens, with all the risks of tension that this may entail.

We take stock below.

Saturday November 5, 2.30 p.m.: a demonstration against the Horizon project

Several hundred people are expected, from Brittany, but also from Vendée, Anjou and Normandy. Several speeches are scheduled from 2:30 p.m. in front of the town hall of Callac:

As during the last rally, no demonstration but a static rally.

Here is the press release sent by the organizers:

“For the second time in a few weeks, the Organizing Committee is calling for a new mobilization against the Horizon project which, in Callac, intends to settle 70 migrant families, despite the massive opposition of the local population. The mayor himself, Jean-Yves Rolland, admitted, on the market, in front of a dozen witnesses, that if he organized the referendum that the opponents are asking for, 80% of Callacois would vote against his project.

Attracted by the appeal of the Horizon project, piloted by Marie-France Cohen, a wealthy widow living in the beautiful districts of Paris, other immigrationist associations have set their sights on Callac. Thus, the Viltaïs association plans to install two African families in the coming days, and announces that this will represent 16 people!

Miraculously, the authorities, who preferred, to the detriment of the countryside, to water the Islamized suburbs to buy social peace, suddenly find, for the arrival of African migrants, millions that they never proposed for the 18% of unemployed , the working poor and the modest pensioners of Callac.

Of course, the immigrationist left, which had already counter-demonstrated on September 17, without authorization, calls, in a provocative way, for a rally right next to that, declared and accepted, of the Organizing Committee. We can only congratulate ourselves that, aware of the danger, the authorities have pushed their gathering back several hundred meters.

A message of support from Eric Zemmour will be read by the departmental secretary of Reconquête 22, Pierre-Yves Thomas, and messages from opponents of the settlement of migrants in their city, in particular Saint-Brevin-les-Pins and Saint- Lys, will also be read.

More than ever, this gathering has set itself two objectives: to obtain from the municipality of Callac the withdrawal of the Horizon project, which did not appear in its electoral programme, or, failing that, to organize a referendum, because in a democracy, it is the people who decide.

The future of our villages depends on it, which Macron, in the name of demographic transition, wants to transform by force into places of reception for African migrants, by legislating from January 2023.

We call on all Bretons, but also all French people who want Callac to remain Callac, that Brittany remains Brittany and that France remains France, to come in large numbers to this gathering, and to ensure its resounding success. »

“The Alliance Souverainiste Bretonne denounces this perverse project which consists of permanently settling a large number of migrants in this small town in central Brittany in order to revitalize and repopulate our old Breton and Celtic land! The reception of this
new extra-European population, bringing its culture, its customs, its traditions, its mores… its religion will completely destroy local Breton life. We must denounce this approach, which looks like a new form of “colonization” of Brittany. Also, the Alliance Souverainiste Bretonne calls on Bretons and Bretons to come in large numbers this Saturday, November 5 to defend Brittany and its future. Come many with the symbols of this fighting Brittany, Gwenn ha Du and Kroaz Du in order to show the Breton character of this gathering. A people without sovereignty is a people threatened in its existence. Ganeoc’h avoids Breizh. »

Saturday November 5, 12:30 p.m.: a Fest Deiz organized by the antifas and the municipality

When the municipality of Callac organizes, hand in hand, with the far radical left, the response, it gives a Fest-Deiz, organized from 12:30 p.m. at the Callac lake (Espace Kan an Dour) with in parallel speeches from different movements and unions. Local elected officials will be present.

We will also find the Trégor-Goëlo Federation of the Breton Democratic Union (UDB) which “ invite to participate. Considering that Brittany has always been and must remain a land of welcome, the UDB wishes to support the project of the municipality of Callac and calls not to let the extreme right hold the upper hand. Welcoming is a duty, not an option”. indicates the party systematically trails other French Republican parties. The Côtes-d’Armor NPA for its part “ calls for demonstrations against far-right organisations. We support the population of Callac and its democratically elected representatives who are threatened by the hatred of nationalists and xenophobes of all stripes” indicates the organization, which is however not the first to attack, including by physically demonstrating, on other themes, the decisions of local or national elected officials.

The Fest-Deiz poster is almost a caricature: we see a white woman with a Triskelion pendant, dancing with a black man wearing a Fez, traditional Muslim red hat although of Greek origin (which we obviously meet daily in Brittany…) and, relegated to the background, almost in the shadows, the one who is obviously his wife. Everyone is free to interpret the meaning of this cliché poster.

Be that as it may, the Gendarmerie should be important, given the prevailing tension, and the Prefect of Côtes d’Armor obviously not having the same perception of the field as his colleague from Ille-et-Vilaine , who recently let the extreme left attack the meeting of Jordan Bardella (RN) just as he frequently lets it ransack and riot downtown Rennes.

Callac: another collective against the horizon project

​Michel Riou and Moulay Drissi, who were at the origin of a first collective against the Horizon project, launched a second collective, in October 2022, called Democracy in Callac. A split within a collective itself (of which Brittany has the secret…) officially for political reasons (the fear of being called “fascists” or “extreme right”, unofficially, for questions of ego and characters.

The collective asks for clarification on the various projects (small town of tomorrow, Viltaïs, Horizon) and accuses the municipality of not being clear with the population. He asks for a referendum on the Horizon Project and believes, like many inhabitants of the Canton of Callac, that the main person responsible for these tensions and this mess which currently reigns in the commune (false rumours, threats, insults, enmities…) is above all because of the current municipality.

The decor is set, place now for the demonstrations of Saturday, November 5th.

[cc] Breizh-info.com2022, dispatches free of copy and distribution subject to mention and link to the original source

Callac (22). The point on the demonstrations of Saturday November 5 – and on the creation of a new collective