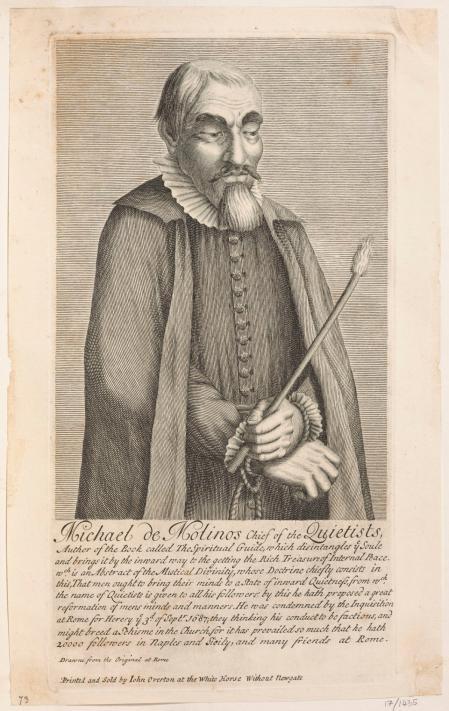 Miguel de Molinos (Muniesa, Teruel, 1628-Rome, 1696) is a character that appears regularly when talking about the Spanish heterodox tradition. Marcelino Menéndez Pelayo included him in his critical canon; María Zambrano and José Ángel Valente, from an intellectual position in the antipodes of Don Marcelino, claimed it. Valente promoted an edition, in Barral Editores, of the Spiritual guide de Molinos, accompanied by an essay on his thought, which received much comment when it appeared in 1974.

Molinos, a priest residing in Rome since 1663, championed the doctrine of quietism, a meditative and highly introspective religiosity that sought inner emptiness. He was a reference spiritual teacher in the Italian capital, where he directed a School of Christ, and also a successful writer: the aforementioned Spiritual guide (1675) went through eight editions in the years after its appearance, and was translated into several European languages.

⁄ His defense of contemplation and “static nihilism” was viewed with caution by the Society of Jesus and the Dominicans.

The figure of the Aragonese was magnified by the price he paid for his ideas. His defense of contemplation and “static nihilism” was viewed with caution by the Society of Jesus and the Dominicans. His attractiveness to the ladies of the nobility aroused malice. “It began to be whispered that the quietists formed a Pythagorean sect, with esoteric initiations and secret cabals,” writes Menéndez Pelayo. In 1685 he was arrested, tried by the Inquisition court and, after publicly abjuring his “errors”, he was sentenced to life imprisonment; he died in jail.

To Sergio Rodríguez López-Ros from Barcelona, ​​historian and former director of the Cervantes Institutes in Milan and in Rome, a new approach to the character is owed. He just got his Cards for the exercise of mental prayer , published in 1676 and out of circulation ever since. The new edition of Herder has a prologue by the essayist and Jesuit Javier Melloni and an epilogue by Rodríguez himself.

The current vice-chancellor of the Abad Oliba CEU University tells me that the discovery occurred “almost by chance. Searching in the Vatican Apostolic Library for a work by Martín de Azpilicueta, an economist from the School of Salamanca, I asked to consult the collection of books seized by the Inquisition. He had read the Spiritual guide but I was looking for the missing ones for a long time Cards , which had not been republished since the originals were confiscated. And there, in a Roman sunset, this lost work of one of the most original Spanish thinkers appeared before me”.

For Rodríguez the text, whose baroque original title was Letters written to a discouraged Spanish gentleman to help him have mental prayer by giving him a way to exercise it It is a little treasure.

“His letters go beyond the discursive method typical of the spirituality of the time to propose an eastern path of simplification, surrender and unity”

“They overflow -he points out- the discursive method typical of the spirituality of the time to propose an oriental path of simplification, dedication and unity. For Molinos, selfishness constitutes ‘the seven-headed dragon’ that prevents a person from growing in their spiritual life. Hence, he bets on turning off desire, suspending the will and letting himself be carried away by God. These letters, located between the Spiritual guide and the defense of contemplation (1682) constitute the mystical axis of his work”.

In the current context of interest in meditation, whether Christian or oriental-inspired, the historian considers Molinos’ thought valid. “He suggests that confusing the priority with the important, setting unattainable goals every day, commodifying human relationships and removing transcendence from the existential horizon is what ties us to materiality and causes us suffering -he adds-. His lesson, despite the 346 years that have elapsed, is deep but simple, with a method within everyone’s reach: it is enough to want to focus on what is essential. There are traces of Molinism in Schopenhauer’s critique of the will, in Heidegger’s notion of nothingness, and in Raimon Panikkar’s concept of emptiness. Rediscovering it is today, more than an act of justice, quite an adventure”.