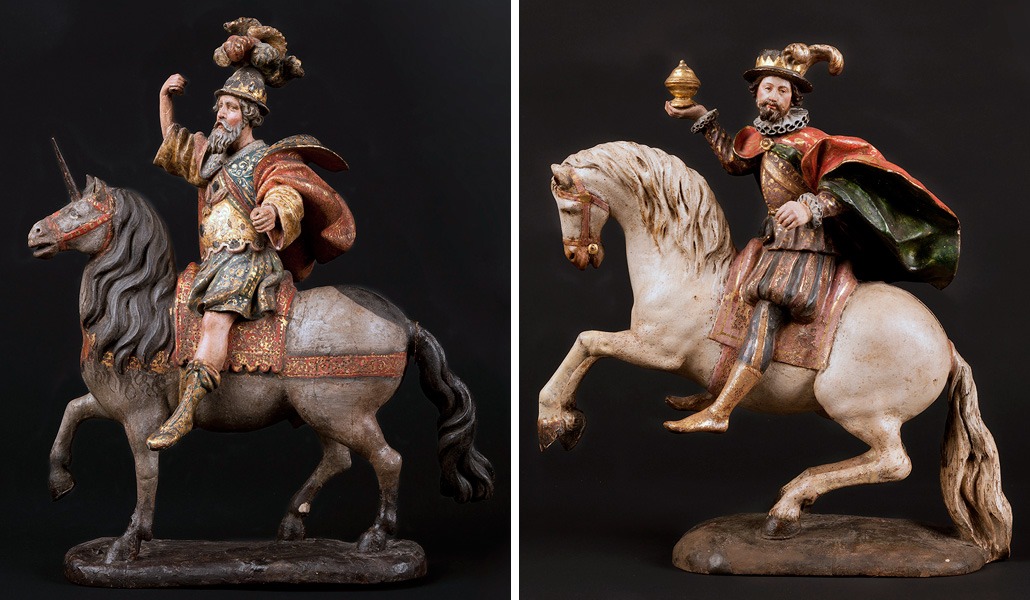 The Gospel of Matthew is the only one that relates, with few details, the passage of the Epiphany that we celebrated a few days ago. It is not known how many wizards from the East went to adore the Child. Tradition —with Pope Leo I— established that the Magi were three because they represented Europe (Melchor), Asia (Gaspar) and Africa (Baltasar), as well as the three ages of man: old age (Melchor), maturity (Gaspar) and youth (Baltasar). Metaphors that symbolize salvation for all races and ages. On the other hand, we think there were three because they matched the gifts (gold, frankincense, and myrrh) that are detailed in the Scriptures. The names of these astrologers are also not known, but they were quoted in a non-canonical writing called the Armenian Gospel of Infancydated in the fifth century, and were also added to the Christian tradition.

In the history of art it has been a challenge to represent these characters with the little that is known about them. The only description is wizards, a Greek term that comes from a medical tribe that, according to Persian spirituality, was dedicated to studying the stars and performing priestly work. Later, they were given the quality of kings, when the writer and father of the Church Tertullian points to Psalm 72, which says: «The kings of Tarshish and the coasts will bring presents; the kings of Sheba and Seba will offer gifts. All kings will bow down before him; all nations will serve him.” In some apocryphal texts they are described as the king of the Persians, the king of the Indians and the king of the Arabs.

For this reason and other studies, it has been justified that the king of Tarsis accompanied these magicians. Tarsis was a biblical town of the Tartessos culture, in the vicinity of Cádiz. Benedict XVI, in his acclaimed work on the childhood of Jesus, based himself on a text from Isaiah —“certainly the islands will wait for me, and the ships of Tarshish from the beginning, to bring your children from afar, their silver and their gold with them, to the name of the Lord your God, and to the Holy One of Israel, who has glorified you»— and in Psalm 72 —may the kings of Tarshish and the remote coasts pay tribute to him; May the kings of Sheba and Seba bring him presents. Let all kings bow before Him; may all nations serve him!”—to address this theme.

Due to the existence of this hypothesis, the Epiphany has been represented with more than three characters on several occasions since the time of the catacombs. Nowadays, one of the most interesting pieces of the Spanish Baroque is the Parade of the Magi of the Sevillian sculptor Luisa Roldán, the Sheave, (1670-1689). A set purchased by the National Museum of Sculpture of Valladolid in 2017. It consists of a scene of 19 sculptures in golden and polychrome cedar wood that must have been part of a larger set that has now disappeared. He includes in the procession a fourth king, the king of Tarshish.

The in-depth study of Alfonso Pleguezuelo reveals curiosities worth mentioning. The cavalcade is made up of each king with his herald and his pages. Melchor’s entourage dresses in Roman style and, although the king rides a black horse, his herald rides nothing less than a unicorn. Gaspar’s group dresses in the Turkish manner and Baltasar’s, with turbans and exotic clothing, is the only one that uses dromedaries. It is in the characterization of the King of Tarshish and his entourage that an ode to the Hispanic monarchy and Philip II as the new Solomon can be glimpsed, which perhaps reveals that this collection was commissioned by Madrid. The Sheave She was the first court sculptor of the last of the Habsburgs and the first of the Bourbons, and the first to be represented in the museum’s collections. b

A fourth wizard and Spanish king – Alpha and Omega