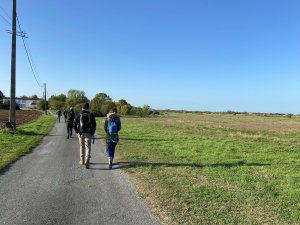 The dioceses, services and movements initiate, here and there, steps to accompany young people in their life choices. Vocational orientation, specific vocation, etc. And if the reflection began first with an anchoring in the call of every Christian to holiness ? Focus on two original initiatives. By Florence de Maistre.

“There are a lot of proposals in the dioceses in France! I think of those steps for vocations, open to all, who express the desire to carry this prayer together. We encourage diocesan events that offer young people an opportunity for reflection and offer many ideas for animation. I agree with the words of the Pope when he says that all pastoral care is vocational. Any accompaniment of choice, including educational orientation, is a vocational approach. We have some to ask throughout life. Let’s look at current ethical issues, discernment is complicated: let’s not wait until the end of life to decide! The tradition of the Church provides tools, such as re-reading, which allow you to realize what gives meaning to your life or hinders it.”, indicates Sister Marie Valérie Lagarrigue, national vocations manager SNEJV (national service for the evangelization of young people and for vocations). In La Rochelle, the Abraham Routes have just been launched. It is about four days of walking in the diocese around a figure of holiness for young people aged 18 to 35 who have not yet made a life choice.

“We are surrounded by the dioceses of Luzon and Bordeaux, which offer ambitious career paths. We do not have the means to implement them. On the other hand, we take up the way in which the question is thought. We start from the baptismal vocation and the vocation to the holiness to better understand what each is called to and unlock the fears linked to specific vocations”, explains Fr. Louis Chasseriau, head of the vocations service of the diocese from La Rochelle. The idea? Integrate the vocational dimension into the initial formation of every young Christian and offer spaces for reflection even before questions really arise. The means chosen? Four Sunday meetings per year, between relaxation, walks in the open air, pray and friendliness. All guided by a great Church figure whose journey highlights an important aspect of any choice.

The first march brought together, in early October, a dozen young people around Fort Lupin in Saint-Nazaire-sur-Charente. The six kilometers covered are not a sporting achievement, but rather an approach that wants to give time to time, landscapes and teachings, Eucharistic celebration and adoration. The participants, students and young professionals, with very diverse social origins and backgrounds, already known to the vocations service, hesitated to invite other friends. The project, which therefore understands vocation in the broad sense, was well understood. They will, for sure, be more numerous at the next meeting. “Mission accomplished !”rejoices Fr. Chasseriau.

No vocation can be born
outside of a happy heart

It was in the footsteps of Blessed Pier Giorgio Frassati that the young people first walked and discovered with him that self-giving and baptismal vocation go hand in hand. No need to wait for a call consecrated life for example, to commit now, fully. “The question of vocation can be paralyzing. We are not trying to water down the subject to lighten the mood. Rather, we have a certain ambitious outspokenness about our common vocation. From there, everyone can understand their specific vocation according to their own desire and that of God, who does not want us locked up or at orders with the little finger on the seam”, assures the person in charge of the diocesan service of vocations. Following this first step, the baptism as a source of the gift, the Routes Abraham will take young people to Saintes, following the itinerary of Saint Philippe Nerri and his call to joy. Fr. Louis Chasseriau continues: “No vocation can be born outside of a joyful heart. We recall the fundamental elements of all Christian life, with this evangelical and baptismal radicalism which concerns everyone and can see specific vocations spring up.”

“I see in young people a thirst for happiness and truth. It is up to us to give them the keys to this quest. Life is not linear, but we can lean on a base, a rock: by discovering the Christian life, the relationship with God that makes us happy, and by walking with others”, shares Sister Anne-Violaine, Dominican nun in Dax. To enter Advent in a different way, the Vie Monastique association, in conjunction with the SNEJV, is renewing the “Pause au monastery”. More than fifty communities of Carmelite Brothers and Sisters, Cistercians, Poor Clares, Dominicans, Franciscans, monastic fraternities of Jerusalem, Trappists, and others, in France and Belgium, open their doors and invite young people aged 18 to 35 to meet, depending on the location, on a Saturday, a Sunday or an entire weekend during December.

The idea was born in 2018, it was a question of sharing a strong moment in communion with the synod of young people in Rome. Since then she has become Advent meetingbetween rest and discovery of monastic life, of his fraternal life, of prayer, of work and of silence. Neither Spiritual Retreat, or weekend of vocational discernment, the approach remains very open. Last year, around thirty participants, students and young professionals took up the challenge. “It is difficult for a young person to dare to enter a monastery. They can come in small groups. The proposal allows to meet Christ through monastic life, to discover what happens behind the walls. To realize that this life still exists and that it is possible! The Brothers and Sisters bear witness to this with great joy!”emphasizes Françoise Ledru, coordinator of the monastic life site.

Each monastery organizes his program according to his rhythm and charisma. Welcome time, visit of the key places of the monastery, meal sharing, participation in prayer services, manual activity, time for discussion and reflection are part of the proposal. In Dax, young people have the chance to discover Kim en Joong’s stained glass windows and live this experience of a catechesis in sensitive and different light. They can also learn, if they wish, calligraphy. “We also take time for free questions and answers to get to know each other better. I admire these young people, their generosity. I like to remind them that they are actors in their lives, that they must keep their own personality to make their choices. We can help them, talk to them without fear of being laughed at or judged.” says Sister Anne-Violaine. She punctuates: “I hope that many young people will respond to our invitation and that we will be able to give them a glimpse of monastic life. Even if it cannot be seen, it can be fruitful. Whatever path you choose, giving yourself up makes sense: it’s a path to happiness”. 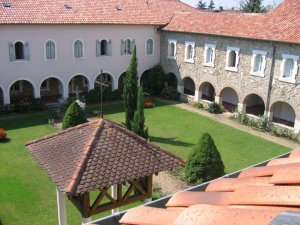 Saint Dominic was born, in the middle of the XIIe century in Spain, around 1170. He is a man of the Middle Ages, a Spaniard from a wealthy family. His parents decide for him that he would be priest and they make him study theology at the university.

St Dominic finding himself at the heart of the Cathar heresy goes with all his strength to defeat this heresy by the only weapons the righteousness of his thought which finds its source in God.

In 1207, St Dominic founded a monastery of women in Prouilhe and this is how the Order of Preachers began. St Dominic will call it: the holy preaching.

In 1863, 15 sisters from monastery St Dominique de Nay leave to found a new monastery in Dax. They found the monastery st Joseph on the domain of the old monastery of the Poor Clares (16th century) assigned since the Revolution to uses other than religious. Until now there have always been Dominican nuns.

In 1996, a new community of Dominicans was born. It is the result of the union of 4 monasteries. On April 20, the first three communities gathered and then a little later the third. Finally, sisters from other monasteries come to join them. Today the monastery – renamed sr Dominique – includes 23 sisters of various ages, originating from several French regions, of various nationalities and cultures

Our life is centered on Christ; we try to bring to light in a radical way the grace of contemplation which is at the very source of the apostolic life initiated by St Dominic.

Young people: all vocations in question – Catholic Church in France