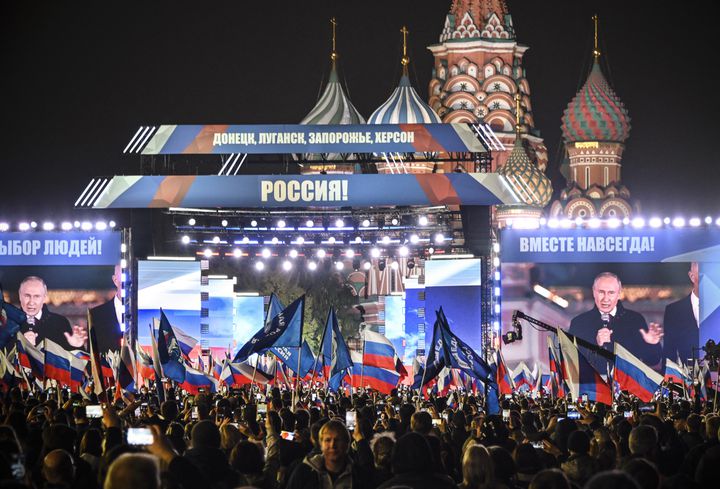 Moscow is revising its targets upwards. After advocating the “demilitarization” and the “denazification” of Ukraine, the Kremlin now intends to slay the Antichrist. “The objective is to stop the supreme ruler of hell, whatever his name is – Satan, Lucifer or Iblis”, wrote former President Dmitry Medvedev during the National Unity Day, Thursday, November 4. This violent charge illustrates the mystical propaganda of Moscow, which wants to unite believers in a common hatred: “We listen to the words of the Creator in our hearts and obey them.”

Last month, Vladimir Putin himself revived the struggle between good and evil. After the annexation of Ukrainian territories at the end of September, the denunciation of the “Satanism” was the subject of a fiery sermon by the Russian president, who defined it as “the dictatorship of Western elites, directed against all the peoples of the world”. the “Satanism”he added, also points his horns behind “the subversion of faith and traditional values”. Ivan Okhlobystin, actor, Orthodox priest and cantor of war, had followed in his footsteps, during the closing concert organized on Red Square.

“Russian leaders need to designate a common enemy”summarizes Antoine Nivière, professor of Russian civilization at the University of Lorraine. “The concept of neo-Nazi suited the traditional Soviet division well, with the ‘Great Patriotic War’ [la Seconde Guerre mondiale] as the foundation of modern history”, but it tends to run out of steam. Manichaean rhetoric takes over, with the blessing of intellectual circles.

“We clearly understand that today there is a struggle between good and evil”, launched a senator from annexed Crimea, Olga Kovidtki. The writer Aleksandr Prokhanov, editor of the nationalist newspaper Zavtra, had said “struck” by the advent of the term in a presidential speech. “This means that the struggle against the West is not only of a military, economic and political character, but that it is also religious and metaphysical”.

For several weeks, the “Satanism” punctuates the chin taps of the most zealous apostles of war. “We are fighting for the existence of our culture, against demons, against Satanism and against NATO”, said host Vladimir Soloviev, in one of his usual digressions on state television. A veneer of spirituality between two calls for nuclear weapons.

“Orthodox ultra-conservative circles have already been circulating this term for a long time”explains Antoine Nivière. “Their books and their YouTube channels infuse the idea of ​​an imminent end of the world, in the style of American televangelists”. For them, “the Russian Revolution of 1917, experienced as a drama, assumes a global conspiracy [originel] against the country, the only one to defend Orthodox values”. Some Orthodox personalities, such as Archpriest Andrei Kvatchiov, “bring up to date very old theories, with Judeo-Masonic and satanic enemies”.

Patriarch Kirill, head of the Russian Orthodox Church, also pours into this Manichean rhetoric by praising Vladimir Putin’s fight against the “globalism”raising the Russian president to the rank of a fighter against “the Antichrist”. This political and religious front is based on the unfailing loyalty of the religious leader to the Russian president since the beginning of the war. In return, this summer, Foreign Ministry spokeswoman Maria Zakharova called “Satanism” the Western sanctions pronounced against the spiritual leader warmonger.

After the mobilization, Kirill had called his flock to “carry out their military duty with bravery”guaranteeing them a place in the kingdom of God if they died there. “Which is more reminiscent of the promises made in the context of jihad than in that of the Christian faith”emphasizes Antoine Nivière.

“De-Satanization” is an ecumenical concept, which is of great interest to the Kremlin, as the Chechen battalions have become indispensable to it in Ukraine. “Wallah, it’s jihad”, summarized Ramzan Kadyrov, advocating a “Union of Christians and Muslims” against the forces of evil. After defining the “Satanism” like his “enemy number one”last March, the Chechen leader delivered a new diatribe against “Satanic Democracy” in the West, calling for the punishment of blasphemers in Europe, while castigating the prohibition of polygamy in the United States and by attacking the LGBT communities, “slaves of Satan”.

Societal issues nourish the common language of the Kremlin and the most conservative circles. “In their eyes, “‘satanism’ is expressed in the questioning of traditional family values: same-sex relationships and marriages, same-sex parenting…” enlightens Antoine Nivière. “All this is linked to the idea of ​​a perverted West.” Russia, like a besieged citadel, therefore justifies the invasion by invoking traditional and religious values. “It is a holy war against the satanic West. It is no coincidence that it has been named jihad”nationalist and conspiracy theorist Alexander Dougin said Thursday. “And if [Ramzan] Kadyrov was able to find the courage to say it openly, I think we shouldn’t hesitate to do it too.”

More prosaically, these statements “may manifest the Kremlin’s desire to dispel the dissenting voices of minority religious groups in the Russian Armed Forces”analyzes theInstitute for the Study of War (in English), while the contingents come from a wide variety of regions. The American group of experts also points to “recent dissensions between Muslim and non-Muslim soldiers”. The authority of Ramzan Kadyrov is certainly indisputable over his Chechen battalions, but it is not certain that his message goes beyond that.

Evidenced by a recent shooting, mid-October, in the training camp of Soloti (Russian region of Belgorod), which an anonymous soldier told the story with the Astra project. After learning that soldiers from the Caucasus had declared that invading Ukraine was none of their business, Russian Colonel-General Aleksandr Lapin summoned the troops. He had mentioned “a holy war” and declared that Allah was a coward if he did not let his soldiers fight for Russia, to which they had sworn an oath. A little later, three Tajiks under contract with the Russian army opened fire on the base, killing around 30 people.

Finally, these discourses on Satanism can “mobilize a certain number ofinternational opinions, as Russia seeks to pit the rest of the world against the West”analyzes Antoine Nivière. “Vladimir Putin, for example, can rely on Ramzan Kadyrov’s references to jihad aimed at Muslim countries”. The theme of “Satanism” corrupt elites and the West also finds an audience in the American QAnon conspiratorial movement, which is very present on social networks.

The assimilation of the Ukrainian people to the demon awakens fears of the year 1000, on the margins of Russian society. In the city of Mariupol, occupied by the Russians, a handful of Orthodox faithful organized an exorcism session in front of the Azovstal factory, where the Azov battalion had entrenched itself for long weeks. In May, already, the Russian media had commented on the discovery of a pagan temple, after the surrender of the nationalist formation. “The Church of Satan has spread throughout Ukraine”summarized Alexei Pavlov, deputy secretary of the Russian Security Council, in a very commented text.

“It is becoming more and more urgent to carry out the de-Satanization of Ukraine.”

Alexei Pavlov had notably mentioned the supposed appearance of hundreds of sects in the neighboring country, after the 2014 revolution, breaking with the Russian Orthodox Church. Among them, the Hasidic Lubavitch movement, from which comes the chief rabbi of Russia, Berel Lazar. The latter asked the Kremlin to condemn these remarks “unacceptable” and “anti-Semitic”. Nikolai Patrushev, President of the Security Council, finally apologized. The affair, much commented on in Russia, did not slow down the hunt for Satanism.

Today, concludes Antoine Nivière,“these speeches above all allow the power to clear itself” in his war of invasion. It is not certain, however, that the argument of the fight against Satan will be admissible before the International Criminal Court, if the latter is called upon to judge the abuses committed in Ukraine.

War in Ukraine: the “de-Satanization” of the enemy, the Kremlin’s new mystical fad resembling a holy war