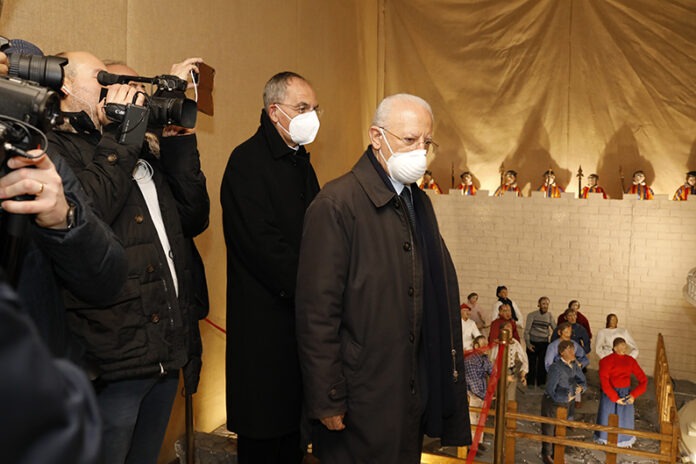 The President of the Campania Region, Vincenzo De Luca, visited the Logos Museum, located at the Convent of San Francesco di Paola in Vibonati, immersing himself in 2500 years of history. It was guided by the two artistic directors, the directors Francesco Gagliardi and Stefania Capobianco and by the founder of the Logos Museum, the entrepreneur and film producer Carmine Cardinale who, together with the young entrepreneurs and producers of the Auris Film company, Rossella and Erika Cardinale, have strongly believed in the creation of the Museum.

After having retraced the story of Jesus through the 27 rooms and having visited the animated village of Santa Claus, where Governor De Luca pleasantly interacted with Santa Claus and the Befana, the conference was held moderated by the director and journalist Stefania Capobianco and by the director and actor Maurizio Casagrande, during which the Mayor of Vibonati Manuel Borrelli, the entrepreneur and film producer of Auris Film Carmine Cardinale, the Superintendent of Studies of the Province of Salerno, Mimì Minnella, the Regional Councilors, Tommaso Pellegrino took part and Corrado Matera, the President of the Province of Salerno Franco Alfieri, the Bishop of the Diocese of Teggiano and Policastro, Mons. Antonio De Luca and the Governor Vincenzo De Luca. “This project, due to the courage and inventiveness of Carmine Cardinale, bears witness to a south that does not want to die,” De Luca said. “Among the different rooms I found all of Southern Italy: the old trades, the history, the family, the gastronomy and I breathed in an atmosphere of strong spirituality”. Furthermore, complimenting the artistic directors who worked on the project, he added: “The room that struck me the most is that of the Kiss of Judas, as you have masterfully managed to reproduce the setting of that time”.

The Governor then concluded his speech by renewing his commitment to a concrete enhancement of the Campania region. Connecting to these words, Cardinale underlined that he must certainly do even more, promoting other important initiatives, in order to increase real growth, both from a social and economic point of view, and from a cultural point of view. The Logos Museum will provide for a strong school participation so that, as reported by the Provveditore degli Studi of the Province of Salerno, Mimì Minnella, the children can appreciate every single room and be involved in an experiential journey in which art and history intertwine. Afterwards, the Bishop of the Diocese of Teggiano and Policastro, Mons. Antonio De Luca, expressed his gratitude for what has been achieved within the Logos Museum, which he defined as an “expression of solidarity, commitment and sharing”. Great appreciation also from Maurizio Casagrande who defined it as “a magical place, a journey into an enlarged nativity scene, in space and time. To close the evening with great success, the season inauguration of the Logos theater hall, with the show “Comedians during the plague – Theater in Pandemic times”, in which the young and talented actors, Giuseppe Borrelli and Christian Izzo, received the applause also from Maurizio Casagrande present in the room.