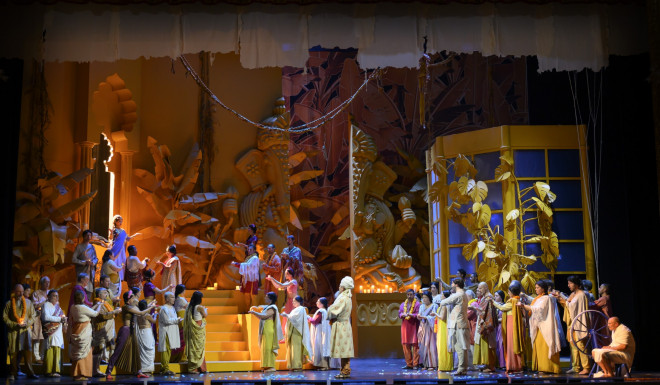 Absent from the Liège stage since 1994, Lakmé by Léo Delibes is the subject of a new production on the stage of the Opéra Royal de Wallonie-Liège for the opening of the opera season, with Jodie Devos in the title role. , the child of the country, Davide Garattini Raimondi taking charge of the staging.

The Italian director Davide Garattini Raimondi had previously presented in Liège in 2017 and with the same artistic team -Paolo Vitale for the sets and lights, Giada Masi for the costumes- a production of norma by Vincenzo Bellini which was very well received at the time (our review). For Lakme, the latter wished to preserve the orientalist spirit of the work and to anchor it deliberately in its time, without any transposition, highlighting an India bent under the weight of British colonization. More than an impossible love story, it’s about opposing traditions, religions and worlds made up of totally divergent peoples. To accentuate this aspect of things, a colorful child representing the spiritual guide of India, young Gandhi, attends as an observer the whole of the story told, while Gandhi, an old man, bent down by the weight of trials, constantly unrolls his famous spinning wheel on the courtyard side.

Very heavy in terms of decorations and dominated by the temple of the elephant divinity Ganesh, the first act is inscribed in a saffron hue, one of the central colors of Hindu culture. Very brightly colored by the costumes and market stalls where precious spices and local foods mingle, the second act dares to be lively and accentuated with in particular this large stained glass window still representing Ganesh.

The Hindu costumes created by Giada Masi appear very beautiful, directly inspired by sari of women and dhoti kurta worn by men. Lakmé’s superb indigo and gold dress marks her difference and her semi-divinity status. More surprisingly, the third act no longer takes place in the forest, but within a clubhouse typically English with its walls covered with animal trophies – including an elephant’s head – and dominated by an unattractive painting of the Empress of India, Queen Victoria (as if announcing a first step towards emancipation).

This approach, which generally holds up, however comes up against a direction of actors that is too imprecise and a bit conventional, whether at the level of the soloists or the choirs. The permanent emotion struggles to emerge, while the treatment inflicted on the three English girls (Ellen, Gérald’s fiancée, Rose and Mistress Bentson their governess), who already form a caricatural trio in themselves, is unnecessarily accentuated. The choreography developed by Barbara Palumbo is nevertheless sincerely inspired by traditional dances.

Jodie Devos discussed the role of Lakme at the Opéra de Tours in 2017 (article and interview with Ôlyrix). She was facing Julien Dran, a tenor then victim of a temporary malform. This evening it is unfortunately her turn to deliver a set back performance, even if she retains the freshness of her tone and her concern for embodiment. Taking refuge too often in the piano, the voice lacks depth and even assurance. More light soprano than coloratura, the famous Air des Clochettes so awaited is approached with caution while the high notes are just sketched. The third act, however, finds her much more relaxed with a controlled and poetic interpretation of her final aria “You gave me the sweetest dream”. The publication of his new disc on Alpha-Classics in the coming days entitled Lost jewelrywhere Jodie Devos pays homage to another illustrious Belgian singer of the 19th century, Marie Cabel, with the Brussels Philharmonic conducted by Pierre Bleuse, is certainly called upon to reaffirm her usual qualities and to reassure.

At his side, Philippe Talbot seems to be struggling in Gérald: the voice with its always pleasant timbre lacks softness and stability. The vocal line often evaporates, a little bumpy, with treble emitted in a somewhat abrupt way. The reason seems to be a lack of ease in the colors and phrasing of this work (which he does not lack in other repertoires that he frequents assiduously elsewhere).

Lionel Lhote portrays a Nilakantha of proud appearance, with a fully mastered art of singing. This beautiful and wide baritone voice, although a bit light in timbre for the character, gives the role its full dimension.

Pierre Doyen portrays a solid and warm Frédéric. But again, the vocal flexibility required for this type of role could be improved.

Marion Lebègue’s captivating and dark tone, the very breadth of her mezzo-soprano voice, give her right character to the following Mallika, very comfortable in the famous Duo des fleurs.

Pierre Romainville plays a delightful tenor voice in the very short role of Hadji, while three members of the choirs (Benoît Delvaux, Xavier Petithan, Benoît Scheuren) take care with acuity of the very short interventions reserved for the merchants.

The conductor Frédéric Chaslin also makes a spicy proposal, which does not lead the house orchestra on the paths of subtlety. From the first bars, the pit is carried out drum beating, with almost frenzy, far from the delicacy and the bright and subtle colors required by this opus (while sacrificing a little in passing the melodic richness of the music of Léo Delibes). The third act, with its more intensely dramatic and collected character, definitely suits him better.

A great success greets the opening of the season at the Opéra Royal de Wallonie-Liège, all the more appreciated as it was threatened by the fire that occurred this summer. If repairs to the theater machinery still appear to be in progress (an intermission is thus imposed after the second act of the show for manual changes to the sets), the theater has regained all its splendor, and certainly its colors.