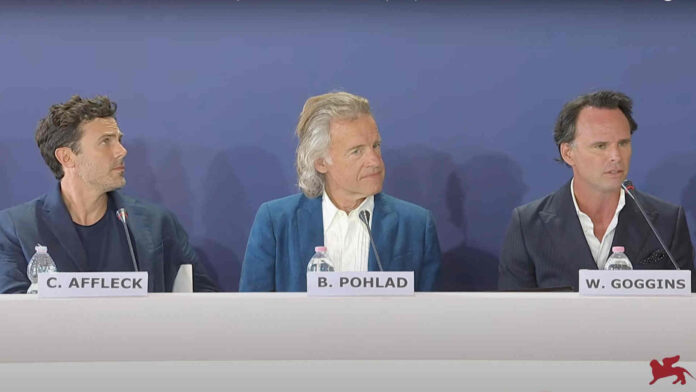 From the Venice Film Festival 2022 here she is Press conference of the film Dreamin ‘Wild with the director Bill Pohlad and the protagonists Casey Affleck, Zooey Deschanel And Beau Bridges

It was presented this morning, in the section Out of Competition of the 79ª Venice Film Festival, Dreamin ‘Wilddirected by Bill Pohlad. In addition to the director, the actors were also present at the conference Casey Affleck, Zooey Deschanel And Beau Bridges who talked about how exciting it was for them to be in touch with the Emerson family, especially Donnie Joe.

Bill, you are very selective in the projects you develop, can you tell us what convinced you to make this film?

Bill Pohlad: It’s a subject that was introduced to us by Jim Burke. I like these stories and they were a bit similar to what I had already done. Then I read the articles and got hooked on the music. When I got the chance to meet the Emerson family and the whole group, I was delighted. You don’t usually meet people like that in movies, which is why I decided to accept this project.

It is a story of return, of a “come back” but unusual, I would say. For Casey, what was it like playing Donnie Emerson while he was there? It must have been a truly unique challenge.

Casey Affleck: Donnie absolutely didn’t want to be on set too much, it was a courtesy to us. Besides, he had some confused feelings about the whole project. Before we started shooting, Bill had suggested we meet him and spend time with him. We were with his family for a while and it was a factor that influenced how we later portrayed these characters. They were really generous.

I wonder if the rest of the cast can tell us something about the relationship with the family in preparing their roles.

Beau Bridges: Donnie Emerson had become a close friend on set and I found his figure truly inspiring, at 91 he still leads his track with no problems. I’ve been with him several times, he taught me how to drive big trucks, it was one of the funniest moments. They are a beautiful family, we had a great time but I haven’t seen it that often. He has come a couple of times because he lives in Nashville.

Noah Jupe: I’ve met Donnie even less than Casey but the time I spent with him was magical, special, full of emotion, he’s a person full of passion. Extremely respectful towards us, he gave us the space to interpret the character in our own way but he was always available to answer our questions. Having the opportunity to talk to them was really important.

How was it for Noah and Jack to imagine them as young people? Was it a difficult task?

Noah Jupe: What really connected us was the music. The first time Jack and I met, we rented a theater to practice together, to rehearse. Our relationship became a friendship and we related to music, we worked on this to do something creative.

Jack D. Grazer: We understood each other quickly. We are both “obsessed” actors and we listened to the albums every day of preparation. We had a meeting or two with Joe Emerson, he taught me how to drive a tractor with a very fatherly attitude towards me. He is a truly amazing person. Music was a bond, a very important bonding agent like a glue.

Bill Pohlad: It was all shot on the farm where the family lived and where the recording studio still exists. Maybe we should have emphasized that more in the film. All the exteriors were shot on their farm. Some interiors instead in the space of their homes.

For Casey. Last time you were in Venice with Andrew Dominik, who tomorrow presents his film here …

Casey Affleck: I think it’s amazing and I don’t know if I’ll be able to see your movie because I have to go home. This is one of my favorite places because all the festivals have their own characteristics and the personality of Venice is so elegant, so prestigious. People love cinema, there is its story here but it is a quiet place, full of respect. I love to come here. Andrew is a very good friend, I’ve seen a couple of versions of Blonde, it’s a film that took a long time but he’s so slow at what he does. It’s a beautiful movie just like this. It is an honor to be here.

In one final scene, Donnie’s character tells Joe, referring to the song, “You are his magic.” What is the magic of this project for you?

Casey Affleck: Bill has been working on it for many years and is the person who had the vision of this work. He spent a lot of time there. Directors work in such different ways and actors act differently too. It is never the same. Bill has his own way of shooting and watching the story take shape I tried to understand what he wanted. There was the magic.

Walton Goggins: I believe the magic of this film is the magic of the story. It’s a story I’ve liked since I first read it, it was about a year ago, before I started. It’s a script that raises a lot of questions. What is fame, how do we measure success? What is the shame you feel if you don’t reach the top? What did these brothers have? We are really proud to have played such a brave story about success.

Bill Pohlad: For me it was the family, the magic element. These people so simple, so authentic. There is nothing fake about them. Joe was welcoming, kind and helped us when he could without trying to intrude on the scenes, he let things go by themselves.

Beau Bridges: One person who was very important to me as a mentor was my basketball coach who had been a national champion in the past, which I never would have become. He had created what is called “the pyramid of success” and this film is about that. The coach told us that success does not depend on victories but it means finding peace in your mind. If you find peace of mind, you can leave a job knowing that you have done your best. And the building blocks of success are based on two pillars: hard work and enthusiasm, joy. The coach told us: «everyone can work hard but if their work is accompanied by joy, then that’s where the really important things happen». The top is divided between faith and patience. It takes faith and trust in spirituality, whatever yours, God or whatever, self-confidence, faith in yourself. But you also need to be patient because things don’t always turn out the way you want them to. Making this film was just that. We all knew we had a great responsibility in telling the story of this family. We come from different places so the way we prepare ourselves, the way we work is different and this required a lot of collaboration and trust in each other to do our best before leaving. If you do this, you cannot lose.

Casey Affleck, how did you connect with your character and in your soul did this film move something that you may have to deal with in your real life?

Casey Affleck: The film is about failing and getting back in the game by giving yourself a second chance. I’ve had enough of failures, stories of falls. I’ve been in a lot of movies that seemed like hits and they didn’t. Then there were failures in my life but when I was playing the character of Donnie, I tried to think about what he would feel, the idea of ​​losing relations with his family and the will to continue playing, to make music in a way. small, limited, in a studio. He knew that his music was beautiful and although no one listened to it, he kept doing it anyway. In the end he was right. It was nice to incorporate what I feel as a man into my work. Being an actor allows you to communicate feelings and this is the best part of my job in my opinion.

Who inspired Donnie and Joe as musicians. You know that?

Bill Pohlad: They talked a lot about their musical inspiration. As we said in the film, they didn’t have a lot of input. In the beginning, their music was pure music, what Donnie heard inside and then eventually he got inspiration from the radio. He started listening to Marvin Gale and got other influences from small stations that played any genre of music. And that’s what really influenced him, a blend of different elements.

Walton Goggins: I had never been to Donnie’s house until we started shooting the film instead Bill was a long time. I didn’t meet Joe until I went there but he immediately gave me his friendship with him, we immediately tried to get inside the person, the pain and suffering. Donnie is the character, he is the one who has the gift he told me. Joe just wanted to be close to him but the thing that surprised me is that he doesn’t listen to music. There’s this guitarist he likes but I remember he didn’t have music in his house. She is very austere, she lives alone. I watched him play and it was almost a religious experience. It was in her body, she was sweating, it was almost a tribal celebration, something she felt physically. Zooey is a musician and she probably understood their influences better than any of us.

Zooey Deschanel: I haven’t talked to them about this. I know they have a lot of talent in that family. Nancy was a very talented musician. What we wanted to show as a group was how extraordinary they are.

The director nurtured the characters you developed, the music itself… what effect did it have on her when she first heard it?

Zooey Deschanel: It’s a beautiful record. Donnie’s talent is mixed with his inability to use the material for recording. At that age he was a boy and he had this warm sound. The microphone appears to explode. It is very different from the way we listen to recordings today. This is what captures your hearing. They use their voices as singers, musicians and even as sound engineers at the same time.

Beau Bridges: When I first heard the song it was almost a relaxing, repetitive meditation. Music is such an important part of what we do but our story also reveals that when you try to make a living through this art, you also need to know something about marketing and get people to listen to you. as much as the music. These two people were musicians but the commercial aspect came 30-40 years later.

Noah Jupe: I loved that album, I know all the songs by heart. The strange thing is that reading the script, the first time when they sent it to me, I realized that I had never heard of these two people. Then I listened to the album and realized I knew some of their songs. I had already felt them somehow, they had been part of my growth so they already had a certain familiarity to me.