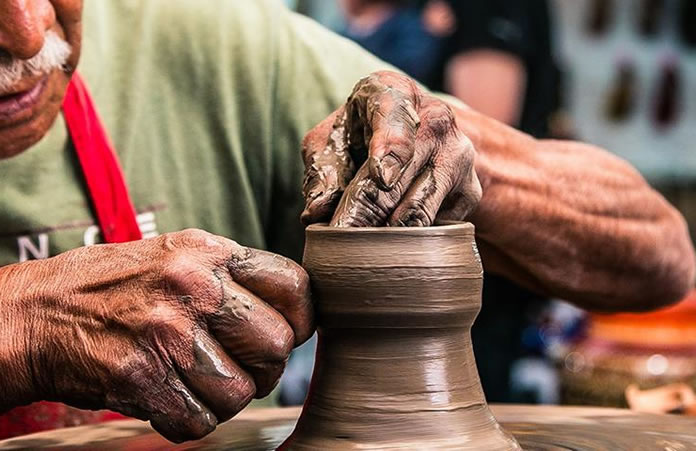 The Minister of Agriculture, Esteban Valenzuela, accepted a request from the national artisan world, which for several decades has been seeing the threat of obtaining raw materials to carry out its traditional trades -plant fibers and clay being the most vulnerable-, and promised to work, through INDAP, the pertinent agricultural services and the actors of the sector in concrete action plans to face this problem.

The Secretary of State participated this Thursday, together with the national director of INDAP, Santiago Rojas, and the executive director of Conaf, Christian Little, in the inauguration of the “First National Seminar on Raw Materials for Crafts, Materialities at Risk”, which brings together until this Friday at the Montecarmelo Center to farmers, managers, researchers, teachers and the interested public.

The minister recounted several cases that he has heard about farmers who face the lack of wheat straw, pita, coirón and horsehair for basketry in various territories, and addressing the audience he said that “the conclusions that you reach in this seminar should move us , and that is where conservation comes in, thinking about heritage areas of materials, alliances”.

He added that INDAP will continue to promote farmers’ and artisans’ markets throughout the country, since “there are regions where there is a lot of inequality and they do not have places to market.” He also raised the need to create a National Artisan School in the future, “where to improve and share knowledge.”

“You have to understand that tradition is also innovation. Let’s see if with the INIA and the FIA ​​we can look for ways not only of access, of alliance to have raw materials, but also to explore in a respectful way with tradition how to have the materiality, because the spirituality of doing the work and loving the territories and you (the artisans and artisans) have the beauty. Here we are together with INDAP to strengthen crafts, a treasure of Chile and the possibility of decent employment for thousands of compatriots”, said Minister Valenzuela.

For his part, the national director of INDAP, Santiago Rojas, stated that “it is time to stop observing and take action. This seminar can allow us to advance in a joint view, discussed, discussed collectively, which is inclusive, to institutionalize a clear public policy for the sustainability of raw materials for the traditional craft sector in our country”.

He also said that there are around 7,000 artisans in the country, 4,900 of whom live in rural areas (74.8% women and 24.2% men) and are supported by the institution, who are an important voice in promoting a new development model in the country, where environmental conservation is safeguarded and sustainability practices are promoted.

The voice of the craftsmen

During the day, a discussion of “artisanal voices” was held, where the farmers Fédima Soto, a basket maker from Chaiguao, in the Los Lagos Region; José Neihual, a wood carver from Liquiñe, Los Ríos Region, and Georgina Castillo, a coirón basket maker from Hualqui, Biobío Region, shared their life experiences and the difficulties they have today in obtaining raw materials, due to the activity forestry, poor management of resources and the destruction of wetlands, among other reasons.

Georgina Castillo said that she has been working in basketry for more than 50 years, during which time she has been teaching her children and a daughter-in-law, who is her best heiress. “Today it is difficult to get to places where we can collect the raw material, either because of the fires or because they cut down the trees where the fibers we work with are housed, but we are going to go as far as they tell us there is, even if it is very far, because we don’t we want this tradition to be lost,” he said.

Fédima Soto also said that she must travel far from her home to find the conquillo for her handicrafts, because “there are few wetlands left and the fiber that is there is eaten by cattle and sheep”, to which is added all the drying work and cleaning that this basketry requires.

José Neihual emphasized that “artisans are not a factory, since a piece requires a whole process that goes from the collection to the finishes, passing through a creative look.” In his case, he said that due to the lack of some traditional woods he has had to experiment with other species and rescue logs from rivers with keys, oxen and tractors.

Leslye Palacios, executive director of the Fundación Artesanías de Chile, who moderated the conversation block together with Elena Alfaro, director of the UC Crafts Program, said that extractivist activity, logging, fires and livestock production are some of the main agents that are behind the scarcity of raw materials and called for joining wills to have a public policy on this matter “and return to having potato baskets and other traditional pieces.”

They will promote action plans to safeguard raw materials from artisans