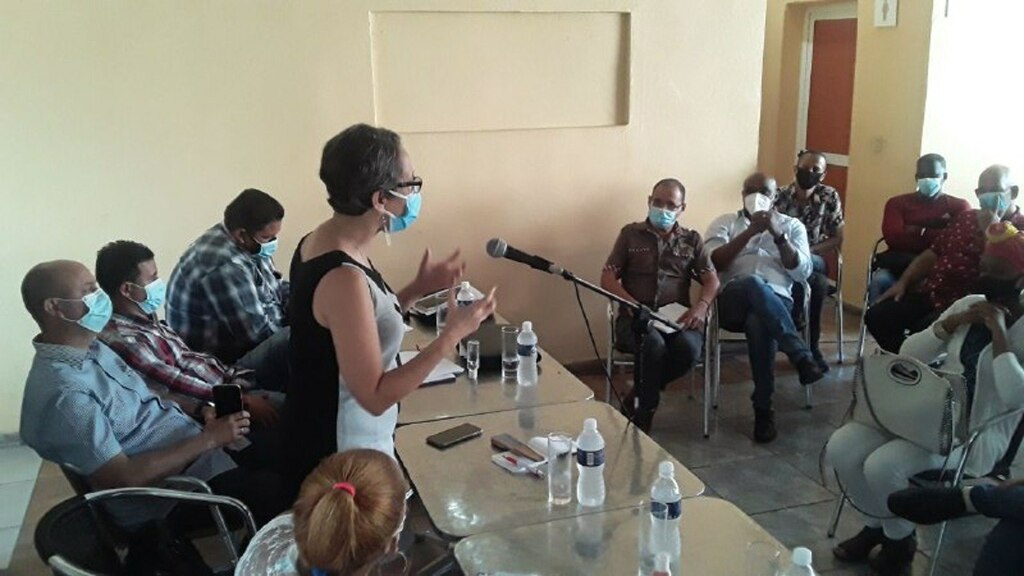 Ciego de Ávila, May 17 (ACN) To listen to the artists, their concerns and suggestions to involve them in the transformation of the communities, he called today in Ciego de Avila Olga Lipsy González Fernández, official of the ideological department of the Central Committee of the Communist Party of Cuba (CCPCC)

During a meeting with creators and directors of the sector in the capital municipality, as part of the integral visit of the Secretariat of the CCPCC and its auxiliary structure to the territory, González Fernández highlighted the mission of culture to cultivate the spirituality of people and contribute to improving the environment as a whole with the rest of the State organisms.

Richel Fernández, a member of the Polichinela group, expressed the willingness of the actors to advise the cultural promoters of the neighborhoods and overcome the barriers of lack of resources or transportation so as not to stop the activities and bring them closer to the peripheral neighborhoods of the city.

In turn, other representatives of the theater referred to the strengths of the performing arts in community work, with experiences of great value in the extension to remote areas of the municipalities, as well as their dissatisfaction with the lack of support to materialize a new project that would take art to remote villages and popular councils.

Felipe Rodríguez, a musician, warned of the need for the artistic education system to include peasant and Yoruba music in its programs, as well as to ensure that the product offered to tourism responds to the genuine values ​​of the national culture.

Orlando Pino Amores, director of Musicávila, was precise in stating that the teaching of typical instruments such as the tres should be promoted, as well as preventing the shows that are presented to tourism from being a projection of international trends, disregarding the promotion of the values ​​of the national culture.

González Fernández highlighted the role of cultural programming, through which the country’s cultural policy becomes a reality, and spoke out for perfecting the work systems in cultural institutions, which should not make decisions without listening to the artists, to involve them in caring for the people.

The commissions that evaluate in the territory the state of compliance with the ideas, concepts and guidelines of the 8th. PCC Congress, held in April 2021, will extend their performance until the next day 19, with exchanges in the productive and social sectors.

They call in Ciego de Ávila to transform from culture