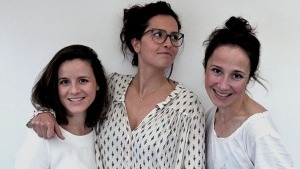 Objects of religious devotion, corny? No way ! As proof, this shop openly assuming its attachment to the Catholic faith, inaugurated in the heart of Paris on October 10th. And this is not a trial run. Catholic Retro, a Christian concept store founded by three young women, has met with great success since the opening, in 2016, of its first store in Marseille, at the foot of the Bonne Mère. It has now made a place for itself in the very chic rue de Mézières (Paris 6th), between the La Procure and Téqui bookstores. A prime location for this lovely boutique of contemporary religious objects, and proof that “bondieuseries” are, against all odds, on the rise.

A paradoxical phenomenon since the practice of the Catholic religion is declining in France. A trend confirmed by a recent Ifop study for the magazine Assignment which revealed that only 59% of 18-24 year olds were baptized, and that 3% of French people went to mass every Sunday. However, the market for religious objects is relatively flourishing, dynamic, and welcomes more and more players. If the first arrivals remain solidly anchored in the Catholic tradition, the latest tend to widen their range to respond to a quest for spirituality in the broad sense.

Armelle Pecqueriaux and her two acolytes, Marjolaine and Fanny, all three founders of Catho Retro, as well as Emilie Broders and her sister Pauline, creators of the brand godsavetheking, were, each on their own, the instigators of a new kind of store that appeared in 2015 and 2016. Online or physical stores that are committed to offering religious items in tune with the times. Exit the old-fashioned statues and old-fashioned cards. Their ambition is to dust off the Catholic universe by offering products with a trendy design: decorative objects, pious images, jewelery embellished with Christian symbols… Their faith is openly assumed, and is expressed through pretty objects, sorted on the shutter or of their own creation. “The Catho Retro touch is this classic side, respectful of tradition, mixed with a trendy atmosphere and an offbeat tone”, confides Armelle Pecqueriaux. Same intuition at Godsavetheking: the modern side has something attractive and allows to reach more people, sometimes even distant from the faith but who are attracted by the quality, the originality or the line of the product.

A concept that runs on the fire of God! Catho Retro now employs seven people and has just opened its second store in Paris. She even harbors the dream of opening one one day in New York! As for Godsavetheking, it has shown constant growth since its creation in 2015. A great progression that allowed the two founding sisters, Emilie and Pauline, to leave their respective jobs in 2018, then to hire their youngest, Charlotte, in 2021.

One of the reasons for their success? Undoubtedly the fact of responding to a strong demand. In 2015, there was almost no offer in terms of religious objects resolutely in line with the times. Catho Retro and Godsavetheking have this history in common: they were created due to a personal need felt by the founders. Armelle Pecqueriaux remembers having had to spend a crazy amount of money to buy goodies for the baptism of her son. There were only expensive products on the market that he didn’t like. For her part, Pauline, an artist at heart, had finally started to draw the bookmarks herself on the occasion of her son’s baptism, finding nothing to her liking in the trade.

If the Catho Retro concept store plays the Catholic card to the full – guardian angel at the entrance, rosaries, crosses and other pretty knick-knacks in the window -, other brands are more discreet but nonetheless distill Christian values. This is the case of the Parisian boutique 123 Family, in the 15th, offering healthy games, good books and decorative items for families. If there is indeed an abundantly provided “spirituality” section, it is not what is obvious when entering the store. “Clients come first for the games, the core target is the family, but that does not prevent us from discreetly testifying to our faith, without claiming it loud and clear,” explains Diane de Langalerie, who joined the family business created by his parents in 1995. This subtle positioning notably involves the launch, in June 2022, of their own brand: Thank you. A brand with the ambition to make Christian symbols trendy, through jewelry and religious images. “The goal is to be able to wear these jewels on a daily basis, to associate them with others, and thus to assume one’s faith in a discreet way”, specifies Diane.

Including discreet Christian symbols in everyday objects is also the line adopted by the young brand. Top hearts. Launched on August 15, 2021, this “subtly Catholic fashion and decoration brand”, in the words of the founders Aurélie Debaecker and Marie Evenas, claim creations with a double level of reading: candles, bags, kits, T- shirts, coffee cups, all this haloed by a more or less discreet sacred heart… Objects that are addressed to those who will recognize the love of Christ in them, but also to neophytes.

Caladia and Resplandor, the newcomers

It is certain, the Catholic concept store is emulated. October 2021 saw the emergence of two new players in this niche market: Caladiawhose name evokes a plant also nicknamed “the heart of Jesus”, a brand of textiles and stationery drawing its identity from the Christian faith, and resplandor, a shop specializing in decorative items inspired by ex-votos. The health crisis and the successive confinements linked to the Covid are not unrelated to a demand which visibly continues to grow. A desire for spirituality, a quest for meaning, a return to Christian roots, are clearly felt. “The period of Covid has given rise to questions, has awakened in some a need to refocus on the essentials, and to rely on Christian hope which warms the heart”, abounds Armelle Pecqueriaux. A craze for religious objects also observed by Diane de Langalerie and Emilie Broders.

If Catholic shops are multiplying, due to increased demand, their positioning remains well marked. The new actors are very small structures, which are not scattered. Resplandor is positioned only on ex-votos, which are currently very trendy. As for Caladia, each collection of which is thought out according to the liturgical calendar and declined around a flower, its flagship products are baby nappies with clearly Catholic prints (lambs or Marian symbols), and sweatshirts for mothers.

The collection rain of roses, embellished with floral embroidery and inspired by Saint Thérèse, had a very encouraging start: “We sold all of our sweatshirts in three weeks”, says Geneviève de Besombes, co-founder, with Alix Pichelin, a childhood friend. , of Caladia. Next product launched by the brand: a limited collection of fabric dolls with the effigy of the Virgin Mary and Saint Thérèse.

I saw the Virgin, Boncoeurs, fashion or an act of faith?

Interestingly, it is not only convinced and practicing Catholics who launch brands or products with Catholic connotations. Other brands also take advantage of the current attraction for the spiritual, and bring together grigris and ex-voto, the Virgin Mary and cartomancy. Thus, the Lyon brand good hearts, created by two sisters in 2018, offers decorative objects and in particular ex-votos, inspired by religious art but also by Indian spirituality. In Marseille, the e-shop I saw the Virginalso launched in 2018, markets, alongside statuettes of Mary available in flashy colours, “Mary’s oracle tarot” candles revealing secret messages…

Some brands therefore risk mixing religion and superstition, and thus reach a wider audience than just practicing Catholics. A clientele sensitive to a more popular practice of religion, highlighted by the Ifop survey for Mission: 53% of the baptized who declare themselves to be non-believers nevertheless recognize that they light candles in churches. A trend accompanied by a real demand, which has given rise to the emergence of very eclectic stores of religious objects.

These “Catholic” shops that run on the fire of God