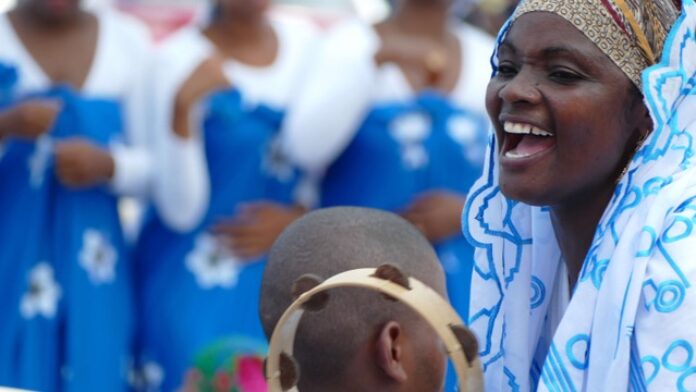 The videographer-globe-trotter Christine Coulange will present on October 7, 2022 at the 6MIC in Aix-en-Provence her new creation: “The rhythms of Trance”. An immersive journey in sounds and images, which is a summary of the musical journey she has been making for 15 years between Africa and the Indian Ocean, from Morocco to Mayotte via Egypt, Kenya, Zanzibar or even Madagascar.

Africa introduced you to Christine Coulange in 2016: for fifteen years, the Marseille artist, both videographer and composer of electronic music, has been working to collect, in sounds and images, the traditional music of the countries she crosses, as well as the testimonies of its main actors: musicians, but also directors of music centers, musicologists and experts. We meet her again, on the eve of presenting her new creation, “The rhythms of trance”, in the new room dedicated to contemporary music in Aix-en-Provence: the 6MIC.

What will your new creation which will be given on October 7 consist of?

It is a performance in sounds and images, lasting around an hour and a half, which will be given in the large hall of the 6MIC: a journey in visual and sound immersion, thanks to 3 screens 5 meters wide and at 12 sound distribution points. The images broadcast on the screens respond to each other, and the sounds accompany these images and cross the spaces. The sounds heard include traditional music heard, everyday sounds, as well as my musical compositions: because I compose my music from “samples” (musical patterns, editor’s note) collected from traditional musicians, whose filmed image I keep, and in my video creations, I play on both the tempo of the image and that of the music.

In short, this mixture between images of landscapes and places, everyday sounds, traditional music, and electronic music is your trademark, as an artist?

Since the beginning of my approach as a videographer and composer, I have been recording the sounds of nature and everyday life: because to be able to be immersed, you have to hear the sound of countries: the horns of Cairo, the songs of women fishermen in Zanzibar, the breath of the wind in the palm trees in Kenya…

What are you trying to demonstrate, or share, through this musical journey project?

This “Roads of Trance” project started in 2007. To make better known the musical exchanges between the East, Africa, the West, and the Indian Ocean, I followed a geographical route that made from Morocco, then Egypt, Kenya, Tanzania, Zanzibar, Mayotte, and Madagascar. While waiting for other stopovers… Because instruments like cultures have traveled a lot between all these countries, on camels, trucks, canoes, boats,… Alongside the performance in images and sounds at the 6MIC, I will present also a web documentary, which allows us to hear what the musicians, historians and specialists I met during my travels tell us. We will thus be able to hear Ahmad al Maghrabi, the director of the Makan center in Cairo, which is both a center for the preservation of traditional music and a music school; teachers from the Zanzibar Music Academy, the Dhow Countries Music Academy, where you learn traditional instruments as well as the violin or piano; we will also be able to listen to Tambati Abdou, head of the Madania ensemble in Mayotte, a choir of Sufi women around Deba music. A photo exhibition will also be presented in the lobby.

The Comoros, and Mayotte in particular, have been one of your most recent fields of exploration – you were notably invited for a 3-year artist residency, from 2016 to 2019, by the Department of Cultural Affairs: that what struck you in this archipelago of the Comoros, and in Mayotte?

It is the presence of Sufism, which unites both male and female audiences – in ceremonies, dances and music where the choirs and participants are unisex, however. In Grande Comores we thus met the Grand Sheikh Mohamed Kassim, who is at the head of one of the most important Sufi brotherhoods in the archipelago. He did me the honor of welcoming me to a male Sufi ceremony, which combines songs and dances. Of course I was covered, but this allowed me to understand how tolerant this Islam was, because I was accepted without any problem. In Mayotte I also discovered the Deba of Sufi women: these are ceremonies that combine song and dance, all the women wear the same costume and have synchronized movements – it’s very organized, and very spiritual at the same time. And in these songs and dances we perceive multicultural influences: the sung modulations evoke Arabic songs, and the graceful movements of arms and hands, Indian dances…

And in these ceremonies the “jinns” – these little geniuses specific to Islam – can make their appearance, it is said… Believing in it or not is not the question: you just have to be happy that this traditional culture of Mayotte remains alive. Because it is while traveling that one realizes to what extent, on other continents, traditional cultures remain alive. Here in France we have lost almost everything, our traditional music and dances.

New technologies – video, YouTube, webdocs, etc. – can they help young musicians in Africa or the Indian Ocean to keep these traditions alive?

Definitely ! Moreover, the weight of new technologies has struck me in all the countries crossed: even young people or children who do not have a mobile phone, sometimes have a Facebook account and know how to surf the net and social networks! In Mayotte for example, we are far from having documented all the culture yet: on the internet we find very little information. This is the whole purpose of my webdocs, to bring together information to share for everyone, here and there. And the whole objective of my last artist residency in Mayotte, from 2016 to 2018, was, in conjunction with the University there, to make young people aware of their heritage: because they don’t realize that it has value. On television and on the radio, this traditional music is too little present, and for these young people the big musical stars are Michael Jackson or Beyoncé. It is a question of promoting these musical cultures, and the first step is to give them to be seen and heard…

“The rhythms of trance”: between Africa and the Indian Ocean, the musical journeys of Christine Coulange