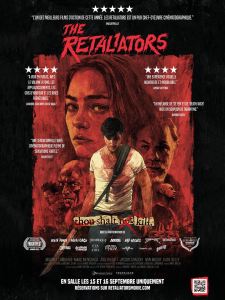 SYNOPSIS: An honest pastor discovers a dark and twisted underworld as he searches for answers regarding the brutal murder of his daughter. An original soundtrack and guest appearances from the biggest names in rock music set the tone for this horror thriller that reveals a revenge game with new rules.

Michael Lombardithe main actor evokes for The Retaliators a “horror film with heart”. It’s very fair and true to define in a few words the feature film of Samuel Gonzalez JR and Bridget Smith. One of the intentions of The Retaliators is a sacred meeting between the world of horror film and that of rock and metal. Because yes, The Retaliatorsit is also this musical originality with the presence in the casting of some “stars”, typeTommy Lee (Motley Crue) as a strip club DJ, Jacoby Shaddix (Papa Roach), all the members of Five Finger Death Punchor Spencer Charnas ofIce Nine Kills. From the outset a written preamble which will take on its full meaning as the film’s very anxiety-provoking subject: ” Sometimes if you’re lucky, evil can be destroyed, but sometimes it’s better to keep evil alive“. The atmosphere is immediately quite gloomy, no cute little silly introduction to play on contrasts. We switch very quickly into the horrific. The intro sets the tone, we didn’t come to see an ode to sentimentality, because before the 6th minute, the anguish dances in our heads and the tartar drips on the walls. And then finally if, we install a very nice empathy with this very nice, modern and not even too cliché family, the pastor dad and his two adorable daughters, just to bring us down with fear and suffering. And of course, the always very effective theory of the wrong place at the wrong time will apply. We quickly understand that the pastor Bishop who prfishing the very morning of turning the other cheek in the event of a problem, will finally make Talion law his new religion and revenge a spirituality. He will take full face the gap between theory and practice, faced with the very destructive violence of the murder of his daughter.

It is therefore here characterized injustice and the victory of the evil one over the divine. God is clearly very absent from this tragedy. Beyond the indelible mutilation of the loss of his daughter, it is the collapse of a world for the pastor. And precisely, The way bikers ZZ Top don’t look mega comfortable, but embody a just impeccable lowland universe to play the very disgusting bad guys. Everyone at some point wants the dope and the money back. The pastor demands justice and revenge. He will not be disappointed…. We tell ourselves that at some point, they will all converge and that it will be severe. There is little dead time, with a refined staging, without superfluity, surely in homage to the classics of the genreold, and that’s great. We are in the same spirit evil Dead (1981) or even Chainsaw Massacre (1982). However, there are also all the codes of the thriller, and we never fall into caricature. In The Retaliators, we’re going straight, but it’s devilishly clever and so we don’t let go. It’s very often a real good horror thriller, with the added bonus of well-felt laughs and a very stunning pure surprise, a real turning point almost an hour into the film, which clearly nothing foreshadowed. just for that, The Retaliatorswell it’s huge !!!

What will the bereaved pastor choose in the face of the possibility of a legitimate and formidable revenge, he the man of faith? The last half hour is a real questioning of evil, its origins, its justification and presents a form of hell on earth for bastards. We suspect that a grand finale will happen in giant barbecue mode, but without the grill… Clearly, the director is going all the way with his idea and that’s what we like. Both the pastor will have in spite of himself more than ever, the opportunity to take revenge. Among other things, there will be an anthology “ Merry Christmas » in sausage cannon mode, totally enjoyable and unforgettable.

The music of Kyle Dixon and Michael Stein is completely crazy, and the soundtrack totally rock and a bit metallic, sticks to perfection with what is playing on the screen. It’s a bit of art upon art, and it really works. The mix of the two cultures makes it one, as the initial project wanted.In the cast, Michael Lombardi embodies with energy and commitment the pastor Bishop, pushed to its ideological, theological and existential entrenchments. He is terrified and faces hell on earth. His playing is direct and full of truth. Marc Menchaca is a schizophrenic cop, and his complex game gives credibility to the case with talent. So what, Joseph Gatt is a pure villain of wickedness… He frightens and sometimes smiles, so authentic is the incarnation of evil here. Finally, The Retaliators revives the classics of its genre, and does so as much with finesse as without detour. Everything is there, we freak out, we laugh a little fat, and we have a great time at the cinema.