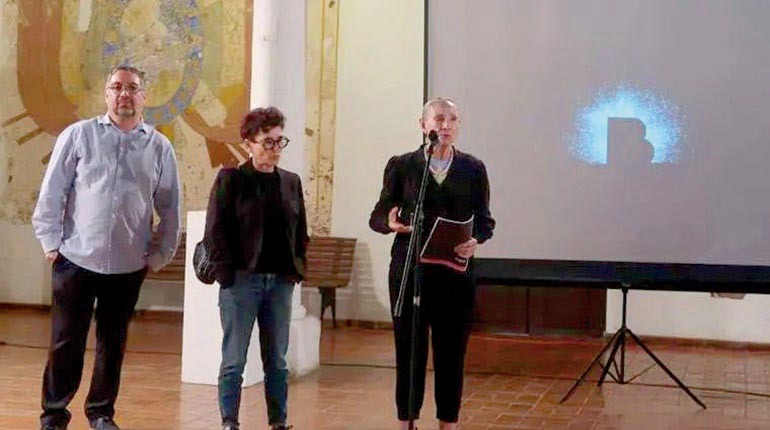 In Bolivia, it has not been possible to organize contemporary art biennials since the masista Luis Arce assumed the Presidency of the Plurinational State, at the end of 2020. The SIART in La Paz, which was held for the last time in 2018, was left in the freezer every time. that the Cultural Foundation of the Central Bank of Bolivia (FCBCB), which in that year became the head of its organization through the National Museum of Art, decided for ideological reasons to distance itself from management commitments to contemporary art, to which He objects to it being an elitist, colonialist art that does not summon the masses in Bolivia. This position of the FCBCB was clearly exposed in an interview-barricade that the activist María Galindo conducted with Iván Castellón –current director of the National Museum of Art–. In this interview, Castellón insinuated that this “postmodern” art is not compatible with the decolonizing project, preferring to adopt the policy of hanging pictures on the wall, and above all underlining the following: “What we are going to ask artists when they have to exhibit It is that her work, beyond the academic canons, has to (…) make a statement against femicide, against massacres, against social injustice, these issues”. (Available in: https://www.facebook.com/100008591051800/videos/1006287603434275/).

Meanwhile, in Santa Cruz de la Sierra, where the longest-running Art Biennial in the country is being held, the XXII version that was to take place last year was suspended by decision of the Santa Cruz Mayor’s Office, which is the body that organizes the event. since 1977. One of the reasons was the great ignorance of the head of the Municipal Secretary of Culture and Tourism, Sarah Mancilla, and her team regarding what managing contemporary art implies. However, the truth is that in this department, which is the economic engine of the country and a great bastion of political resistance against the centralist MAS regime, the biennial had already been suffering to be organized since 2018, suffering from its dependence on a public institution that little budget granted to culture. This organizational vacuum was alleviated in 2019 with the participation in the curatorship and management of Kiosko Galería, a private entity with extensive experience at the national and international level.

Thus, this 2023 had been announced the holding of the XXII International Art Biennial, organized by the Municipal Secretary of Culture and Tourism in alliance with Kiosko Galería again. Let us remember that, in February 2022, the head of this secretariat, the children’s story writer Sarah Mancilla, had announced the postponement of said Biennial for these reasons: “International events require a lot of planning to go full blown. It is one of the most important cultural activities in the city and it has to leave with the note of excellence. It is not a question of budget or time, it is a planning that requires a lot of study, research, to be able to make the decisions for the event itself”. (The Duty, 21.02.2022). The news did not go down well, since it is one of the few international platforms for contemporary art in Bolivia, but the local art scene took it up. (Available in: https://eldeber.com.bo/santa-cruz/bienal-de-artes-visuales-de-santa-cruz…).

In October of last year, they released the dates for the XXII version of the Biennial for August 9 to September 27, 2023, the Urban Park would be the central location (El Deber, 10.13.2022). The call itself appeared only in November, being somewhat overshadowed by the conflictive political context and the greater attention paid to the closing of the administration. What was surprising was that, on December 20, we found out that the Ministry of Culture had just abruptly separated Kiosko Galería from the organization of the Biennial, rendering the call already published without effect. The news was known through a public letter, addressed to the national and international artistic community, that Kiosko Galería published on its networks. He also denounced the aggressive, inconsiderate and argument-free manner in which they had been treated by the municipal authority, led by Sarah Mancilla. On behalf of the municipality, no public pronouncement was known to date (Tuesday, January 10, 2023).

According to the note published in El Deber, on October 13, 2022, the municipality’s budget for the XXII International Art Biennial of Santa Cruz de la Sierra is 700,000 bolivianos. (Available in https://eldeber.com.bo/gente/politica-ecologia-y-espiritualidad-son-las-…). Such a large investment from a public institution for an international event that, in the words of the Ministry of Culture itself, requires long planning and prior research, demanded that the relationship with the counterpart be managed more carefully, depending on the urgency of time. and the advances that already existed. In addition, this Art Biennial is not financed exclusively by the municipal government, in fact, it would be impossible, in public institutions the payments come out only after the contracting service has already been carried out, and the bureaucratic slowness of the public administrative to pay (the artists) -four to eight months to give an interval -. Therefore, private investors are needed –Kiosko Galería also played that role– to finance the pre-production and realization stages of the Biennial. The other important financier until past versions, the Cultural Foundation of the Central Bank of Bolivia, we have already explained that it eradicated from its management the budgets for this type of art that they do not understand either.

The result is that the Municipal Secretary of Culture has left the Santa Cruz Art Biennial hanging, depending on whether some good bidder from the scene saves the party by shouldering the responsibility, and another investigation must be started again. curatorial, sponsorship management with private companies, invitation to international actors, call design, etc., in the same year of the event. What is most demanded of Sarah Mancilla and her management is that the actors who keep contemporary art alive in the city be treated with dignity and seriousness, and that the International Art Biennial be given its rightful place, patrimony of Santa Cruz that has historically contributed through a contest to the gathering of winning works of art that are part of the collection of the Museum of Contemporary Art. It is not the eagerness to inaugurate multiple art exhibitions that an Art Biennial brings to a city, it is better that the use of these economic resources be optimized towards the true need to build a scene that Santa Cruz requires.

The realization of the International Art Biennale falters