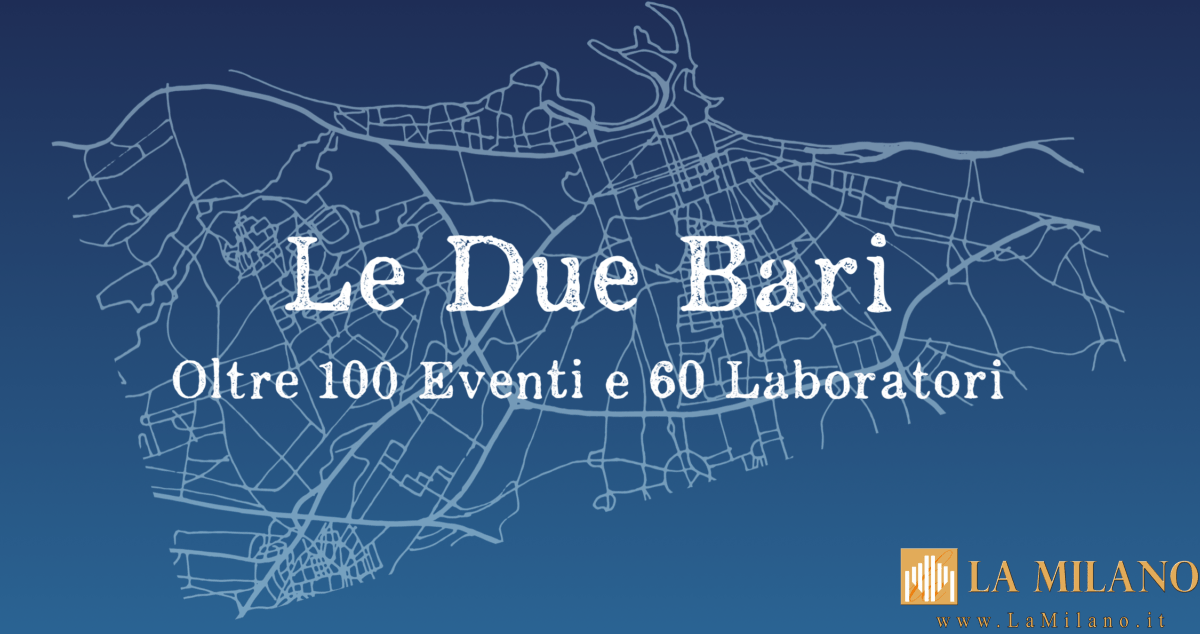 The long summer in Bari, appointments until 11 September.

It opened on Monday another week of events ranging from children’s theater to concerts, from dance to creative workshops: free events spread throughout the city and designed for all tastes and for all audiences.

Here are some of them, referring for all the others to the site of the review The two Bariwhich the Municipal Department of Cultures promotes with the support of the MiC.

Billboard Le due Bari – review “Small barisien-parisien-napolitain festival: the journeys of our music, from the 16th century to today“, Edited by Chamber EurorchestraStella Maris parish of Palese.

Thursday September 8at 20.30, concert “A parisien transcribed in Bari“.

Thursday September 8at 20.30, the company Toitoi Cirque in “Crazy Circus“, Circus dance show for adults and children of the Famous Vicious Circus – national premiere. Composed mainly of young dancers under 35, the newborn company ToiToi already has the * InNatura Fest * festival to its credit, as well as multiple workshops and shows for children, adults and families, in traditional and unconventional places, that combine circus and street arts with contemporary and urban dance.

Monday 29 August, starting at 20.30, concert by “The Wonders“, Among the Italian Beatles cover bands most awarded and most loved by the public.

Billboard Le due Bari – review “Bari seen from the moon“, Edited by The Amoroso, cortile parish of the Redeemer.

Thursday 8Friday 9Saturday 10 is Sunday Sept. 11at 8.30 pm, the children’s show “Totò of the trees“, Of the company Kuziba Theater. Inside the smallest theater in the world, the adventures of a stubborn boy who climbed a tree and never came down. Discovering how the story of the Baron Rampante was born dragged by Totò and his bizarre family of actors.

Starting from Monday 5th September at the Oratory of the Redentore, it will start again “Birds“, theater workshop conducted by Cosimo Severo and open to children aged 12 to 23, which will lead to the creation of the Actoral Choir of the Birds, led by the director Cosimo Severo together with the actors Raffaella Giancipoli and Giovanni

In the “Bird Project”, the artistic practice aims to generate a comparison on the ideal city in an exercise of collective freedom.

Billboard Le due Bari – review “There is an air of celebration“, Edited by Coop. Theaters of BariKismet Theater.

Saturday September 10at 7 pm, show “Feast of All Saints” of the Malalingua company (with Marianna De Pinto, Antonella Civale, Vincenzo Toma, Marco Grossi, Luca Valiano). The intent of the show is to awaken the knowledge of these ancient models, of these human beings, men before they are saints, men in their relationship with life and with spirituality, with all their fears and their contradictions.

The approach chosen is that on the border between sacred and profane, ironic and passionate, typical of a village festival. Announced by an unlikely auctioneer, the Saints will burst onto the scene on their bandwagon decked out in lights, accompanied by the sound of a fanfare.

Billboard Le due Bari – review “There is an air of celebration“, Edited by Coop. Theaters of BariKismet Theater.

Sunday Sept. 11at 9 pm, show “The arts have no barriers“, directed by Domenico Iannone: it is the staging of a theatrical work between subjects with psycho / aptitude difficulties and able-bodied to present works from original texts or transpositions from well-known literary texts with music. The project is not aimed at the “redemption” of “minor” subjects, but simply at merging different languages ​​of different abilities and attitudes, among them.

The path has the simple purpose of demonstrating how much “diversity” is what makes societies rich in interests, traditions, culture and communicability different from each other.

“Le due Bari” is a project financed for 1,129,154.37 euros by the Entertainment Directorate of the Ministry of Culture (MiC) for the realization of live entertainment activities in the peripheral areas of the city of Bari.

The long summer in Bari, appointments until 11 September