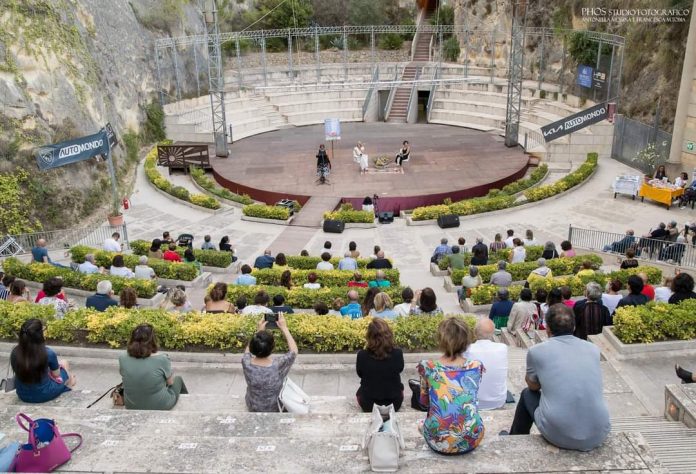 The literary review “Terrazza d’Autore. Voices, stories, suggestions at sunset ”, curated by Ornella Fulco and Stefania La Via, which this year reaches its seventeenth consecutive edition. The leitmotif of the appointments will be nostos, nostalgia and return, as an extreme form of knowledge and gratitude. A theme that has covered the entire history of literature and the human soul and that the narrator guests will each decline according to their sensitivity and their specific field of expertise.

The first meeting, on 13 July, is dedicated to Stories of roots and horizons, with Gaspare Balsamo, actor and “cuntista” who will tell, together with Ornella Fulco, his latest work Under the sign of the cunto.

«A thread never cut or buried, bearer and witness of the need to hear stories that fill the surroundings with meaning and origin, as well as the need for the magic of someone who knows how to tell them. Writing, rewriting and giving shape to this book was like sculpting, slowly allowing a sculpture to emerge which, in the end, appeared », explains Balsamo in the preface.

Not only theatrical texts that have their roots in a mythical and epic world but real “sculptures of words” that Balsamo will be able to animate before the eyes of the spectators. The challenge between Odysseus and Polyphemus, with the interventions of the foolish Giufà and the clever Ferrazzano, the stories of the paladins of France, an “Epic fera” that emerges from the waters are the protagonists of these stories of roots and horizons, in which the tragic and the comic are inextricably mixed in an infinite game of light and shadow.

On July 17 Nostos, return trips. Between sounds and words, with Alenfado. Voices narrating Stefania La Via and Roberto Crinò.

The magic of Mediterranean music with its sounds joins the rhythm of the narration, in prose and verse. The nòstos, the return trip home, also implies saudade, nostalgia, the “suffered desire” to return home, to find one’s things, one’s roots but, above all, oneself.

The journey, therefore, becomes a continuous moving forward for the desire to go back, towards our land, our interior space as well. Back to the archè, the origin of everything.

Passionate about ethnic music, the Alenfado are dedicated to researches, both musical and textual, of pieces of the Portuguese fado tradition. In their concerts they take us into the magical and intense atmospheres of the Lisbon neighborhoods, with a musical journey that from the melancholy notes of fado, between tradition and contamination, leads us to discover assonant sounds also in other popular Mediterranean music.

On July 24 the writer Luigi La Rosa will be the guest of the review with his Nel furor delle storm, a book in which he tells the Sicilian composer Vincenzo Bellini and his incurable nostalgia. A story that transports us from 19th century Catania to the magic of Paris, on the trail of the humanity of a genius, his storms and his melancholy. A short and intense life that emerges from the pages of the book in all its strength. Luigi La Rosa, extraordinary narrator, will guide us in this

journey into the work and soul of the great musician together with Stefania La Via with the readings by Ornella Fulco and the participation of the soprano Simona Guaiana.

On August 3, with Shadows, dust and absences, Beatrice Monroy tells The place of the ashes.

The Palermo writer and narrator will guide the audience on a fascinating narrative and initiatory journey through oral legends, religion, fable, alchemy, through a long historical sequence of episodes of discrimination and female exclusion from knowledge. A hymn against the millenary interdiction of women from knowledge, a song of freedom and awareness that starts from a fascinating legend about a monastery on the border between Italy and France. The stories sprout from each other in the perennial nostalgic desire to meet again. “We are nature, we are in the middle, not detached, we are and we go back there”. Leading the meeting will be Ornella Fulco.

On 11 August, Terrazza d’Autore dedicates one of its appointments to Vincenzo Consolo in the tenth anniversary of his death, Between nostalgia and fury, the destiny of a Sicilian Ulysses. Professor Nicolò Messina, professor of Italian studies at the University of Valencia, will tell us about him and his work.

A scholar and profound connoisseur of Consolo’s work, Messina edited the edition of some texts by the Sicilian writer and was among the curators of an international congress to make his work known. His analytical study of the genesis of the masterpiece The smile of an unknown sailor has received prestigious international awards.

The publication of the works of Vincenzo Consolo in the Meridiani has definitively sanctioned his stature as a “classic”, as a writer destined to remain among the greats of the second half of the twentieth century. His writing stems from an implacable vocation, all aimed at an idea of ​​literature as a language so dense as to challenge the very consistency of reality. In this perspective, Consolo assigns to literature a mission that is both impossible and necessary, not only aesthetic but also ethical and political. Throughout his life he spoke almost only of Sicily. But his Sicily, from which he fled and inevitably returned, irremediably attracted and rejected by its unsolvable contradictions, must be placed in the broader scenario of the Mediterranean, a space where for millennia the civilizations and cultures of three continents have mixed, integrated and collide. Leading the conversation will be Stefania La Via, the readings will be entrusted to the voice of Giovanni Barbera.

Last appointment on 19 August: Ornella Fulco, Liborio Palmeri and Vito Corte (architect) will talk on the theme The sacred in art between absences and persistence. The conversation will start with the essay If God is not worth a painting, a powerful study, published by Gangemi, which Monsignor Liborio Palmeri, director of the DiART San Rocco Museum in Trapani, dedicated to the “nostalgia” of the living link between art and sacredness.

The Church, although the custodian for centuries of the religious symbols of the West and despite having been a powerful factory of images, has ended up losing contact with the most innovative artists, settling into the tired and reassuring replication of the modules of the past. In a compelling journey, the author of this book asks himself questions, without giving the reader ready-made answers but wanting to find with him that golden thread that reconnects art and spirituality, Art and the Church. If God seems to have escaped from the picture, perhaps we need to look for him beyond the canvas, through a painful cut that overcomes any prejudice.

All the meetings of the event, which again this year is held with the support of the Municipality of Valderice and has obtained the sponsorship of some companies in the area, will take place, with free admission, starting at 19 – with the exception of that of 17 July which will be at 9 pm – at the Municipal Theater “Hon. Nino Croce ”of Valderice.