The Wayuu people call for the “I Intercultural Dialogue for the Harmonic and Sustainable Development of the Wayuu people” in the indigenous community of Peluchón, border area between Colombia and Venezuela, for next September 26, to demand their rights in the face of the opening of the border.

Leticia Aguaran, is a Wayuu woman who lives with her husband and children in the indigenous community of Nazareth Alta Guajira, today part of the municipality of Uribia, department of La Guajira, Colombia, her parents, along with the rest of the family, reside in the lower Guajira in the community of Palawaipou, today Guajira municipality, Zulia state, Venezuela.

For the indigenous Wayuu, the territorial political division that defines the limits between the two countries is a fragmentation or division that only has value and importance for the Alijunas (the non-Wayuu) and that, for them, has represented a series of violations of their rights. as towns, ancestral inhabitants of the same.

“We as ancestral inhabitants of these Wayuu lands, the ruling politicians of both countries, never asked or consulted our opinion and position on the border closure, which prevents us from moving freely in La Guajira and on any relevant aspect that impacts our mother. land, our way of life, uses and customs; They have ignored the customary law that we have and that they themselves recognize in their legislation.”

The Political Constitution of Colombia in its article 63 constitutionally establishes the prohibition of selling or encumbering indigenous territories, the constitutional recognition of the collective property of indigenous reservations as a mechanism that serves to preserve the cultures that inhabit it and their values. spiritual, which constitutes the basis of their subsistence and, at the same time, a fundamental part of their worldview, culture and religiosity.

Likewise, in articles 287, 329 and 330 we find constitutional bases of the right to autonomy of indigenous peoples and communities in the regulations on territorial organization and in the regulations regarding the special indigenous jurisdiction. From the perspective of the Constitutional Court of Colombia, the guarantee of indigenous autonomy is an issue related to the protection of fundamental rights, when interference affects the right to ethnic, cultural, social and economic integrity of peoples and communities. natives. The Constitutional Court stressed that the circumstance that until now the Law on Territorial Planning has not been sanctioned, should not constitute an obstacle to the existence and development of indigenous identity and autonomy.

Based on the various regulations on the participation of indigenous peoples and communities, established in the Constitution and in Law 21 of 1991, the Constitutional Court developed the instrument of prior consultation and provided it with the protection enjoyed by fundamental rights. . In principle, it is the duty of the State to consult the indigenous people when legislative or administrative measures are adopted that could affect them directly; prior consultation is not an end in itself, but is intended to ensure effectiveness and concreteness. of the fundamental rights to the cultural, social and economic integrity of the indigenous community and its subsistence as a social group, at the same time, prior consultation serves to concretize or maximize indigenous autonomy.

Likewise, it clarifies that all activities for the use of natural resources and any type of development projects to be carried out in indigenous habitat and lands will be subject to the prior information and consultation procedure, in accordance with the law, where it is ordered that activities or projects that are intended to be developed or executed within the habitat and lands of the peoples and communities, must be presented through a project, so that, meeting in an assembly, they decide to what extent their interests may be harmed and the necessary mechanisms that must be adopted to guarantee their protection. The decision will be made according to their uses and customs.

In cases where it is intended to start a new phase of the project or extend its scope to new areas, the proposal must be submitted for consultation, once again complying with the established procedure.

Articles 6 and 124 of the LOPCI order the state to promote and develop coordinated and systematic actions that guarantee the effective participation of indigenous peoples, communities and organizations in national, regional and local affairs. The indigenous peoples and communities will participate directly or, through their representative organizations, in the formulation of public policies aimed at these peoples and communities or any other public policy that may affect them directly or indirectly. In any case, the proper organization and legitimate authorities of each participating town or community must be taken into account, as an expression of their uses and customs.

The Convention of the International Labor Organization (ILO), ratified by Colombia and Venezuela, and the Universal Declaration of the United Nations (UN) on the Rights of Indigenous Peoples, consisting of 46 articles, establish the minimum standards of respect for rights of indigenous peoples, including the ownership of their lands, the natural resources of their territories, the preservation of their traditional knowledge, self-determination and prior, free and informed consultation. 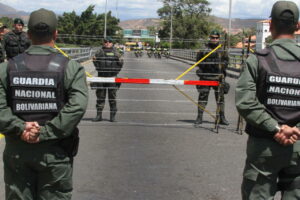 From the Miraflores Palace in Caracas, Venezuela, in September 2015, Nicolas Maduro ordered a state of emergency and the closure of the border with Colombia in La Guajira and the mobilization of 3,000 soldiers to guard that territory, in one of the most critical moments of a diplomatic crisis with Colombia, a decision that significantly affected the lifestyle and quality of life of the Wayuu indigenous people, who for almost 8 years of border closure have been victims of serious violations of their fundamental rights.

From the closure of the border and militarization in indigenous territories, among many other negative aspects, including those derived from the pandemic, a panorama of war and excessive violence was generated, since it allowed organized criminal groups carte blanche to strengthen, extend their presence and domain in the territories.

“On September 26 we will open the border between Colombia and Venezuela. We confirm the government’s commitment to re-establish brotherly relations.” On September 9 of this year, with these words, Colombian President Gustavo Petro announced to the country from Bogotá this important news that affects the Wayuu people in many ways.

The announcement was also confirmed by Venezuelan President Nicolás Maduro, who was pleased with this agreement and promised that there would be exchange and cooperation between the two countries. “I am very happy to announce that as of September 26 we will jointly open the borders between Venezuela and Colombia. In addition, we will resume flights between Caracas and Bogotá, as well as between Valencia and Bogotá. The exchange and cooperation between our peoples restart on the right foot”, said the Venezuelan president. In this way, seven years of border closure end.

It is important to highlight, in each of the presidential declarations, both in 2015 and now in 2022, the Wayuu, ancestral inhabitants of the Guajira territory, are not part of the discourse, mechanisms, processes and political measures to be applied for the announced opening, just as it happened when it was closed, which shows a total violation of the rights they have over their territory and their self-determination.

During the time of border closure, which prevented the mobilization and transit of the Wayuu in their own territory on the border between Colombia and Venezuela, the systematic violation of the indigenous people was evident; from being accused of smuggling and criminals by the public forces stationed in the area; in a demonstration of ignorance of the form and customs that the Wayuu have carried for centuries throughout their territory, which generated an increase in poverty and social problems within each of the communities.

Taking into account all the aforementioned aspects, the indigenous organizations: Human Rights Committee of La Guajira, Binational Indigenous Trade, Binational Organization of Wayuu Women, Yanama Organization, Autonomous Board of Palabreros, Wayuu Araurayuu Association, traditional authorities and other indigenous foundations, Based on Wayuu reflections and conversations, they call for the “I Intercultural Dialogue for the Harmonic and Sustainable Development of the Wayuu people” in the indigenous community of Peluchón, border area, for next September 26.

“We want as Wayuu according to our customs, as we usually do when something happens or will happen in our territory, we prepare ourselves to see what role we play or should assume, we are going to talk and reflect, why when the border was closed we We were not consulted, we have the right to be consulted about the situations that occur in our territory. Today President Petro and President Maduro announce an opening as if nothing had happened and without asking or consulting each other, so we want to define a collective decision of the steps that we are going to take as a people and which we want to express to both leaders in the meeting which will be held on September 26. The closure of the border generated serious damages that mark our well-being and tranquility today, with this dialogue we are going to seek that both countries include us in their border opening policy as main actors in the decisions they are taking and those they will take. so that they do not continue to violate our rights as happened at the time of closing it. With these words, Delia González Pushaina, a member of the Binational Organization of Wayuu Women and one of the organizers of the meeting, expressed herself.

Meanwhile, Mrs. Leticia Iguarán will continue to be ignored, traveling in her own territory, between Palawaipou and Nazareth, along the roads and highways considered illegal by the binational authorities, avoiding the abuses and humiliations of the military forces.