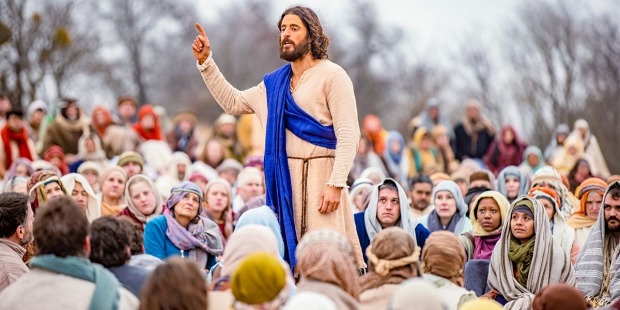 Elizabeth Tabish, Noah James and Amber Williams talk in Madrid about their experience in shooting the new version of the Gospels that has broken the mold all over the world

At the end of October, the Spanish capital came to a standstill when three of the many famous actors who are part of the beautiful story that is The Chosen. Elizabeth Tabish (who plays Mary Magdalene), Noah James (the disciple Andrew) and Amber Williams (Tamar) have shared anecdotes about the series with the specialized press.

Currently The Chosen (translated into 56 languages), which narrates the life of Jesus from the point of view of those who lived with him and is faithful to the Gospel – well beyond the characters and clichés that we all know – can be appreciated from three important aeropaghi.

One of these is the acontra+ platform, managed by the distribution house A Contracorriente Films, for those who want to taste it online. Those who prefer the DVD and Blu-ray format have the product available from November 28, and it comes out in cinemas on Fridays.

Nothing is known yet about the promotion of the second season. Instead, it is known that the third was released in the United States and earned 8 million dollars in one day. The Chosen will have seven seasons, for a total of over 50 chapters.

How was your experience of the Holy Hour in Las Rozas on Monday October 24, promoted to the Hakuna movement?

Noah James: It was really the highlight of our trip to Spain. There were many young people, they were splendid, generous, they welcomed us singing… It was truly an ideal entrance onto the stage.

Elizabeth Tabish: I think everyone should have this experience, the community is filled with love.

Because you have joined the project of the series The Chosen?

ET: I was about to quit acting, because despite doing commercials I didn’t earn much and I lived with my mother… My dream was to be an actress or die, and when my agency spoke to me about this issue I read the script and I I felt it was written for me, because it was everything I wanted in a project. My character is ideal, emotionally complicated, but it was a medium where I could express what I was feeling at the time. This project changed me and saved my life.

Noah James: This job has asked more of us than any other as actors, but the gift has been so beautiful, a blessing. I’m so thankful that I put my heart, sweat and tears into it… That’s the beautiful part of acting, being able to create characters that are a dream.

Amber Williams: They (Noah James and Elizabeth Tabish) already worked on the first few episodes, I joined a little later. I’ve been blessed to see the quality and cinematic experience of each of them, and I wanted to be a part of that. I then prepared for a casting for the character of the woman at the well, but ended up playing Tamar. It was an incredible experience, and it really made me grow a lot.

What it brings The Chosen to other works on the story of Jesus?

AW: Look at Jesus from a different point of view, because we see His life through those around Him: the disciples and other contemporary figures. And they are all so unique that the gaze on Him is always new. We also see Jesus in another light, more human, closer. We see him carving wood, brushing his teeth, joking, laughing… he is a Jesus with whom one can easily identify. That’s why I believe that The Chosen many like it.

What films about Christ had you seen before the start of the series? What was the character you liked the most, and how did you approach yours?

ET: I remember seeing Jesus of Nazareth (Franco Zeffirelli, 1977) e Jesus Christ Superstar (Norman Jewison, 1973), which is what got to my heart. The Chosen it brings those two worlds together, because there’s a way to tell the story in a traditional way, but there’s also the joy and drama and emotion of the musical. As for inspiration, I focused on the script, which is very original, and we all tried to bring our lives into it.

What have you learned from this process during the filming, from 2019 to today?

NJ: Very much. The most important thing was to find a rhythm for the series following long working days. Sometimes we shot a scene for ten hours, even if it’s only three minutes on screen. For me the biggest challenge was staying “fresh” and not losing energy after so many hours on set. Beyond the religious aspect – I’m Jewish – it was a great opportunity to learn the teachings of Christ and share them with all the other protagonists of the series. The Chosen it opened my eyes to something I didn’t know, for example through parables. My first experience in the series was related to the Sermon on the Mount, which for me is impressive.

AW: What comes to me and where I’ve learned is to be patient with myself, as a human being and as an artist. It helped me feel the grace, commitment and honesty towards my colleagues to play my character well. Then came the bond with the assigned role, and all this increased my confidence as an actress, and I was able to embody a special character from two thousand years ago. Director Dallas Jenkins has been very generous to us, he loves to fully explore what works and doesn’t work in our work. It is also a project to which it was not known whether it would have been possible to give continuity, given that it started with an initiative by crowdfunding… To all this was added the Covid emergency in the second season, we had the lockdown, viewers could watch it for free… There were times when we couldn’t predict what was going to happen. It was truly a gift to make the series, I would even say a miracle. A miracle that happened. I would also like to point out how essential it is to build community. In the end it was the fans who financed the project, which can reach many countries and is therefore open to many cultures. In summary, it was a wonderful experience.

What if The Chosen hadn’t it been on the platforms? Do you think it would have been as successful?

NJ: It is clear that part of the success was due to Covid: people were isolated and it was not known for sure what was going to happen. In that moment, much of society found a sense of hope and love to include in its life through The Chosenand this has greatly boosted the popularity of the series, among other things for its healing message.

AW: I think the series is like your favorite song: it’s so good you want to share it right away, which we did with our family members. “You have to see me!” I told my brothers. All of this happened before it hit theaters. We also have to thank for the support on mobile applications, since The Chosen it is a humble work, but one that tells the story of Christ in the most authentic way.

The actors of “The Chosen” speak exclusively at ALETEIA