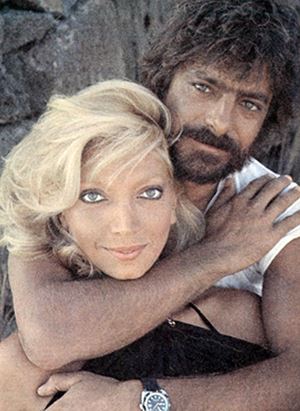 One of the most famous faces of the big and small screen, but also one of the hottest and most appreciated voices, an actor with impulses capable of making him pass with expressive ease from the dramatic to the comic, Giancarlo Giannini returns to television on March 5, on Rai 2 , with the film An angel in hell, directed by Bruno Gaburro. With Giannini, Chiara Conti, Giorgia Wurth, Laura Adriani and Roberto Farnesi. Giannini plays the role of head of the family: «It is the story of a family in which the two parents have problems with their children, who are drug addicts. The father knows absolutely nothing. In the end, however, the affair will be resolved positively. Very simple, then. The theme of the film is: give me better parents and I will give you a better world ». The popular actor is no stranger to television roles in which “strong” social issues are explored, having previously dealt with work dealing with problems such as alcoholism, for example. The film, produced by Nuova Media Italia, was shot in Veneto and sponsored by the Ministry of Health with the participation of the Veneto Region, the Department of Health Policies and
social and with the collaboration of the Ulss and Venetian hospitals. «Yes, a pleasant experience», says Giannini, «even if I would prefer to do something even more demanding, but the period is not the best».

It would seem a bit down in tone …

“I am unhappy with the way things are in the country and in my profession. It is very difficult to make a film and the Italian ones come out badly, have a bad distribution; in short, there is no need to be happy with the situation we live in. At this point it is understandable that every now and then the enthusiasm passes me. I rely on the hope of working with foreigners ».

“Because we have too many problems here. I am not speaking so much for myself as I am now … an elderly person, but for the young people, to whom I recommend to go outside Italy, regardless of the profession. Here they pay little; outside, you earn three or four times more. Especially for us actors it becomes almost impossible to work ». He gives a loud and clear cry of alarm. Other colleagues, while complaining about the crisis situation, are less caustic ». You are very hard on Italy

“Hard? I tell the reality, but I am and remain optimistic. As for the film, I hope it goes well. My character is a father who has problems with his wife and children, despite the fact that he is rich and therefore should suffer less than others. He cannot understand the difficulties of the children. A film that will make you think ».

She advises young people to leave. What is the difference between what you did as a young man and today’s reality?

“It was a more relaxed way of working, there was less frenzy and less publicity. Today we work only on the condition of the revenue from advertising. And in
Tv there were extraordinary directors like Sandro Bolchi or Anton Giulio Majano who knew perfectly well how to use the camera. The scenes also lasted twenty, thirty minutes of continuous shooting. Today
you shoot ten scenes a day, everything is faster and I also believe that the computer has taken something away from the soul of the work. And I say it, as an industrial electronic expert. Apparently not
there should be a connection with the actor’s work but in reality in both activities we work with imagination ».
You enter Giannini’s personal corners, daily struggling with the hobby of inventions …
“I always have to do something, I can’t sit still. I use my hands a lot, an extraordinary gift from God. This morning, for example, I repaired the roof of the house. On the other hand, the school that I did
he taught everything, to do practical things but also theory, and I was left with this desire to do. It amuses me, it relaxes me and it is a challenge with myself. Isn’t the bricklayer coming? It doesn’t matter, I’ll do it myself. “
A versatility that he has also transferred to his profession: actor, voice actor, director …
«I don’t make distinctions. It is a way like any other of applying intelligence. In addition, the rigor came to me from another school, that of model aircraft: method, patience, precision. There is not much difference between those who study electronics and those who study acting. If I study an electronic diagram, I don’t see it, I have to imagine it. And a character I have to build and imagine before I can play it. Those who say: “I have become the character” make me laugh. We tell the character, like a fairy tale to a child. As adults, no one tells us stories anymore and so here we are, we actors, who tell tales to continue to feed the imagination. I always say to young people: study to the bottom, because if you have to do something, it must be done well; it’s like preparing spaghetti, either you make them well or it’s better not to make them. Doing things must be a pleasure ».
Projects?
“I have to go to London and the Caribbean for an American commercial. Fortunately, there are Americans. In Italy there is a lot of confusion. Anyway, my dream, one day, is to make a film about faith,
I would love to. Faith, the mystery. The nice thing about man is that he has the feeling of what he doesn’t know, and if there were no mystery we would not have an engine to be curious about life. Here, that’s the mystery, it’s faith in something or someone. For me, faith and mystery are the same thing. To propose such a thing these days is difficult. But I don’t despair ».

The 80 years of Giancarlo Giannini