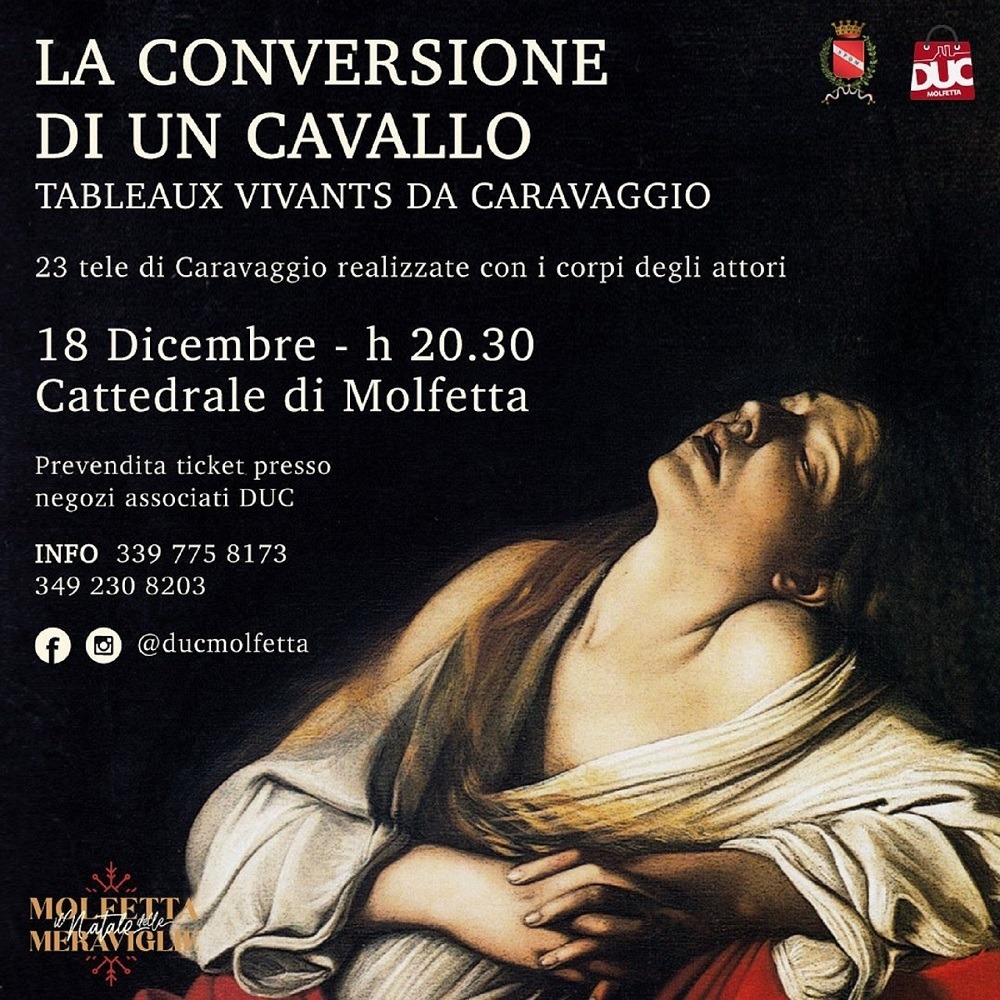 
Molfetta dresses in wonder with “The Christmas of Wonders”. And the wonder will also be that of the spectators of “The Conversion of a Horse” on stage tomorrow, Sunday 18 December, at 20:30 in the Cathedral of Molfetta. 23 living paintings reproduce famous masterpieces by Michelangelo Merisi da Caravaggio, thanks to actors, dancers and models who become the protagonists of the project with their bodies. The performers of the show The Conversion of a Horse, built with the tableaux vivants technique, they reproduce Merisi’s canvases under the eyes of the spectators, with the help of props and polychrome drapes, generating a great emotional impact and a suggestive scenic force. A single cut of light illuminates the scene framed in an imaginary frame, with visual changes rhythmically marked by the music of Mozart, Bach, Vivaldi, Sibelius. The work of body theater was born as a didactic project in the Luigi Vanvitelli Faculty of Architecture in 2006, already protagonist in the Capodimonte Museum, then on tour in museums, galleries, squares, churchyards, alternating with the other performance by Salvi for Miracle, dedicated to sacred newsstands of Neapolitan school devotion. Admission fee (ticket €5).
Info: 339 775 8173 / 349 230 8203. Presale ticket for The Conversion of a Horse at DUC Molfetta associated shops: Emotions, via Adele Cairoli 17b; Palombella hardware store, via Baccarini 13; Cartoon Store, via Giaquinto 7; Expert Gadaleta, Corso Umberto 25; Annagrazia, Corso Umberto, 11b; La Trottola, C.so Umberto, 63; Heart Home Evolution, via Mario Pagano, 18; Sasso Calzature, Corso Umberto, 14; Smart, Corso Umberto, 83; Tatulli Pharmacy, viale Papa Giovanni Paolo II, 16/F; Panna12, via Berlinguer, Mixer café, viale Papa Giovanni Paolo II, 89.
So the Christmas of Wonders in Molfetta comes to life, program designed for all age groupsthat themunicipal administration And the Department of Commerce of the city of Molfetta they wanted to design through many initiatives. The project of Urban District of Commerce of the city favors the great values ​​of non-violence and solidarity, tolerance and peaceful coexistence among peoples, without forgetting the children, who are the great protagonists of this magical period of the year. Three sections make up the architecture of the programme: Theater for Children, Music and Dance, Events and Artistswhose artistic direction is entrusted to theCIPS cultural association and its president Pantaleo Annesein collaboration with Francesco Tammaccoconsultant and event expert. «Our Christmas of Wonders – claims the president of the ass. Cips Annese – wants to be a caress, a cuddle to our city and beyond, it wants to be a showcase for Molfetta traders and their professionalism. The artistic programming, chosen by me in concert with the expert Francesco Tammacco, involves every age group and every kind of art, all with the aim of understanding the artistic attraction as an investment and not entertainment, for the creation of a solid commercial sector, so that in the shopping streets of Molfetta every Christmas can be our city’s economic driving force».A swarm of appointments for all tastes. Among the main Christmas attractions of Molfetta also attention to spirituality with ‘Theorem Bethlehem’ and the exaltation of food and wine excellence with ‘Wine Christmas-The wine roads’. Monday December 19th, at 18:00on an itinerant route from Corso Umberto to the Villa Comunale, takes center stage Theorem Bethlehem, which recalls the seven hundred years of the crib of San Francesco in Greggio. The characters are extras who recite passages from the Old Testament and ancient Christmas stories, among them the actors Rosa Tarantino, Cosimo Boccassini, Isabella Ragno, Gabriella Caputi, Elisabetta de Trizio, Rosanna de Candia, Maria Teresa Caprioli, Carlo Salvemini. This admirable theatrical performance, by the ass. cultural The Cart of Comedians directed by Francesco Tammacco and the music of the La Nota di Volta association, is dedicated to the figure of Mary and to women who, like Mary, have abandoned themselves to the sacredness of the divine announcement, such as Mary’s monologue, taken from “In the name of the mother” by Erri DeLuca. The festive and convivial moment is instead dedicated to the best wines. ‘Wine Christmas-Wine roads’ winds along Corso Umberto from 21 to 23 December, from 19:00, with the interludes of poetry and music, the stands set up by the 2 Mc Spettacolo and Wine Food association of Molfetta and the presence of prestigious cellars of the nectar of the Apulian and Lucanian territory, including Cantine Otto Raggi, Ladogana-60 Passi, Cantine Santoro, Cantine del Notaio, and the Italian one. A team of sommeliers, coordinated by Valentino Faccitondo, is present among the stands, with a tempting offer of chestnuts or sweets typical of the Molfetta Christmas tradition. While people drink an excellent glass, extraordinary interpreters from the world of opera such as the masters Antonio Stragapede, Marilena Gaudio, Stella Roselli, Onofrio Salvemini and others perform from the ‘singing balconies’, interpreting famous arias and Christmas songs. And then again street artists, stilt walkers, jugglers, concerts declined in various genresfrom the blues (N-JOY in Piazza Principe di Napoli on 21 December at 20:00) to bossa nova, from jazz to ethnic, there is something for all musical palates. Without forgetting the lovers of tradition, with storytellers and pipers, and of Santa Allegrezza with the return of Giovannangelo de Gennaro, an important collaborator of Vinicio Capossela, in concert with ‘La Raffineria dell’Allegrezza’ (Piazza Principe di Napoli at 20:00 on 20 December). The Councilor for Commerce of the City of Molfetta and President of the Molfetta DUC, Carmela Minutepoints out: «in the Christmas of Wonders program, we have privileged the feast full of spirituality, so that everyone can remember the value of peace and coexistence in solidarity. But above all we wanted to help the proximity trade of our operators who have been severely tested by the pandemic with these initiatives that favor purchases, without asking for sponsors or any kind of contribution from the traders. Our effort is to give people back the pleasure of shopping in the center after a long time».

Sunday in the cathedral in Molfetta “The Conversion of a horse”, 23 tableaux vivants inspired by the masterpieces of Michelangelo Merisi da Caravaggio