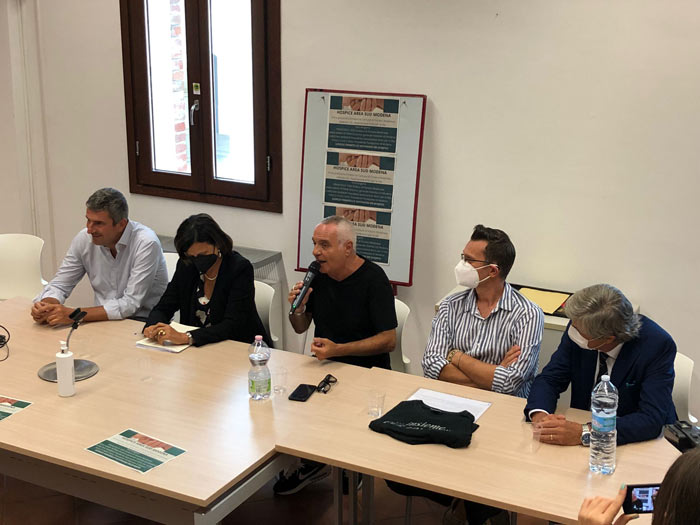 The first public meeting of presentation of the Hospice Area Sud Modena projectwhich will rise in Spezzano and will be at the service of the social and health districts of Sassuolo, Pavullo and Vignola.

The meeting ended with the signing of the memorandum of understanding between the implementing bodies: Azienda Usl, Amici per la Vita association and the Municipality of Fiorano Modenese.

The project was born from the effective collaboration between Ausl Modena, Union of Municipalities of the Ceramic District, with Fiorano as leader, and the voluntary association Amici per la vita which, thanks to the significant support of the Modena Foundation – which contributed to the project with 300 thousand euros – and donations from local companies, will conclude the purchase of the land on which the structure will be built, in a strategic position, easily accessible, north of via Ghiarella between via Villa and Rio Chianca, in Spezzano. Land that will be donated by the Association to the Usl Company.

The authorities of various municipalities who will use the structure, the General Management of the Modena Usl Company, the President of the Modena Foundation Paolo Cavicchioli and the entrepreneurs who generously contributed to the project were present at the meeting. He also intervened Giorgio Panarielloa friend of the Amici per la Vita association, which in the evening brought his show to the square in Formigine, to raise funds.

The project in its entirety will be carried out by the Local Health Authority thanks to regional funding of over 2.8 million euros.

“Thanks to the generosity and sensitivity shown by Amici per la vita and by our communities, we can complete a network of services for palliative care that is important for the citizens of the southern area – said the Director General Ausl Anna Maria Petrini – Through assistance personalized and multidisciplinary, the Hospice will make it possible to guarantee the best possible care in response not only to physical needs, but also to psychological, spiritual and relational needs. The primary objective, in fact, is to improve the quality of life of the sick person and his family. This day therefore represents for all of us a much sought-after goal and an excellent result obtained from the synergy and passion between the various actors involved, but also the starting point of a path that will involve us all – health, institutions, associations, individual citizens – to offer new and qualified assistance possibilities in our area “.

“What is most important to the Modena Foundation is to combine its disbursement capacity with social utility, encouraging collaboration paths which in turn generate concrete actions capable of producing important results. – said the President of the Modena Foundation Paolo Cavicchioli – The energy that feeds us multiplies in front of a common goal, thus becoming the good of all ”.

For the voluntary association Amici per la Vita, which in recent years has supported the Hospice project with strength and competence and has taken the initiative to donate the land to the Ausl for the construction of the structure, “This is the point of arrival of a journey that began in 2001 and at the same time a starting point. – declared the president of the association, Christian Barbieri – The Hospice that will arise here a few steps away will have to represent the place where the person and their family context are taken care of and not just the disease. As an Association we will use all our energies so that this structure becomes a “place of life” and above all where to develop culture on palliative care. During all these years we have had to face mistrust of the common thought of the Hospice as a place where one goes to die! People will find a place to spend a part of their life path as serenely and with dignity as possible … A big thank you goes to all those fantastic people who in every capacity, volunteers, professionals, supporters, are part of the Amici per la Vita family, because it is only thanks to them and their precious and professional daily work that we are here today ”.

The Hospice Area Sud will be equipped with 14 beds and intended for the care and assistance of people suffering from terminal illnesses. It will be part of a palliative care network that already consists of three nodes: a home care service from a palliative doctor, a psychologist and a nurse networked with the general practitioner, a clinic dedicated to the Casa della Salute in Sassuolo and an outpatient clinic dedicated to the Sassuolo hospital.