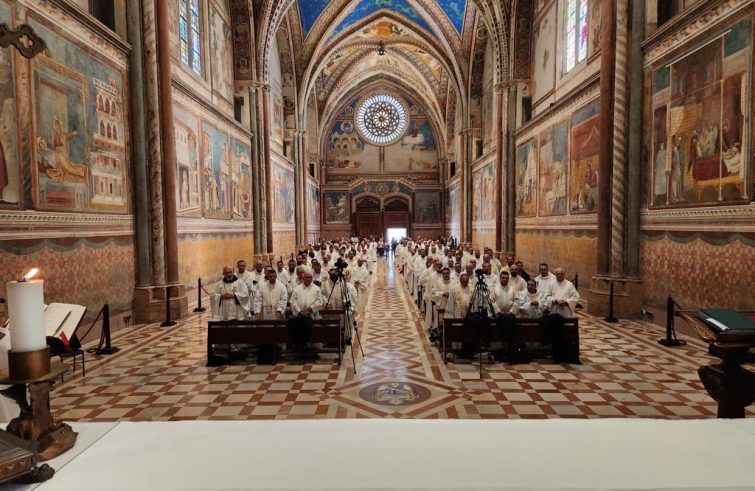 The spirituality and formation of the proposal was safeguarded by Assisi, the fulcrum of Franciscan spirituality, which, at the “Domus Pacis” in Santa Maria degli Angeli, hosted 180 participants coming not only from various regions of Italy but also from Switzerland and Germany, together with priests of African and Latin American origin

At the conclusion of the Golden Jubilee, a tradition that is now typical of the Renewal in the Holy Spirit could not be missing: the National Retreat for priests, deacons and religious, promoted this year from 7 to 12 November. As always, the spirituality and formation of the proposal was safeguarded by Assisi, the fulcrum of Franciscan spirituality, which, at the “Domus Pacis” in Santa Maria degli Angeli, hosted 180 participants coming not only from various regions of Italy but also from Switzerland and Germany, together with priests of African and Latin American origin. The work, alternating with moments of praise and prayer, relationships and spaces for reflection and sharing, opened with the Eucharistic celebration presided over by Fr Michele Leone, national spiritual adviser, and the presentation of the Retreat by Fr Vincenzo Apicelli, national delegate Priests, and the team in charge. Also present were Msgr. Domenico Sorrentino, archbishop-bishop of Assisi-Nocera Umbra-Gualdo Tadino and of Foligno, who brought his greetings, and Msgr. Gualtiero Sigismondi, bishop of Orvieto-Todi and General Ecclesiastical Assistant of the Italian Catholic Action, who celebrated the closing Mass. Dictated by the biblical verse “Priests freed to serve according to the Spirit” (Rm 7,6), the days drew inspiration from the words spoken by Pope Francis on 11 October last, during the homily for the 60th anniversary of the beginning of Vatican Council II, as an opportunity to “restore primacy to God, to the essential: a Church that is mad with love for her Lord and for all the men he loves. The Church is inhabited by joy. If she doesn’t rejoice she denies herself, because she forgets the love that created her ”.

This Church, hoped for by the Holy Father, after the severe trial of the pandemic, through the clergy present (with different ages and origins) therefore tried to find themselves in the heart of Umbria, listening to the Word and letting themselves be involved in the meditations held by Card. . Angelo Bagnasco, archbishop emeritus of Genoa, former president of the Council of Conferences of Bishops of Europe and former president of the CEI, called to preach on the theme: “Do not conform to this world, but allow yourselves to be transformed by renewing your way of thinking, in order to discern the will of God, what is good, pleasing to him and perfect “(cf. Rom 12: 2). To be, concretely, shepherds capable of being “in front of the people to mark the way, in the midst of the people as one of them, and behind the people to be close to those who are late”, using the words of Pope Bergoglio, Bagnasco he exhorted us to “be believers first of all, because it is not enough to be teachers of the faith, it is necessary to be men of faith and this means that the Lord is close to us and as such we must discover him, moment by moment. If the priest succeeds in this, with the help of the Spirit who opens our gaze, the intelligence of faith itself and of the heart, then as a Christian community we will be able to truly guide the faithful, and also support those who find it harder to believe ”. The cardinal, in the light of his ministry and in the face of the challenges facing contemporary society, added that currently “the Church in Europe, especially in the West, is experiencing a certain difficulty but there is absolutely no need to be discouraged, nor yielding to pessimism: Christ is Risen and even the desert can ‘flourish’ in the Spirit. Crossing several European countries I was able to see more sprouts, and meet young people who question themselves with the fundamental questions that always lead to God’s horizon: this is a great sign of hope and encouragement for everyone, first of all for us priests. “. Finally, a nod also to the style of hospitality “that the Christian must always have in the name of Jesus”, underlining that “this is a living tradition of the Church that is in Italy, a little for our nature and a lot for our ‘evangelical inspiration: the primacy of God must remain the guiding star of our existence, from which love flows in all its forms, including hospitality, without forgetting both corporal and spiritual works of mercy ”. Finally, an invitation to “not be afraid to be among the young, with greater holiness and closeness, with their typical contradictions, turbulence, sometimes the controversies that we pastors are well aware of. Often they are few ‘numerically’ but there is no need to be frightened, because the best ally of the Gospel, even today, is not our religious organizations, structures or resources, but the heart of man and that of young people is less encrusted. from ideologies and prejudices that the major generations may have acquired. Therefore, we must walk alongside them because, even when they may have doubts, resentments and disputes, they ask for nothing but spiritual points of reference and seek in us priests, by instinct, something that the world cannot give “.

It was then card. Gualtiero Bassetti, archbishop emeritus of Perugia-Città della Pieve, former president of the CEI, to celebrate the Eucharist in the upper Basilica. “Thanks be to God, even during the months marked by Covid and especially in the sad days of the beginning of the war in Ukraine, I was able to see that the strong presence of the Holy Spirit was never lacking – said the Cardinal, who had already preached to the Exercises of the RnS in 2016 -, and this shows us three things. The first is novelty, the Spirit of God makes all things new and we are often frightened by it, preferring to settle in our mental schemes: therefore let us entrust ourselves to the Spirit who makes us ‘actors’ and to the new that he intends to bring into ecclesial reality and into the whole humanity; secondly, the Holy Spirit is the Spirit of harmony, the body of Christ, which is the Church, is articulated, with many charisms and ministries, and sometimes it can happen that the human part prevails more over this unity which is requested; the third characteristic to which the Spirit invites us is mission, because this is the time of the outgoing Church, as the Pope often recalled using the expression ‘field hospital’: prophetically, Don Tonino Bello maintained that the Church is a ‘clinic’, Don Primo Mazzolari called it ‘ambulance’… The mission, therefore, is to cure the sick and to announce the Gospel to everyone, following the example of St. Francis. The fraternity and civilization of love that were brought to the land of Europe in the first centuries of evangelization must now bear fruit ”.

TO Salvatore Martinez, national president of the RnS, the task of guiding the traditional Seminar of New Life in the “itinerant” Spirit in the Franciscan places, which ended with the outpouring prayer in which the National Council and the National Service Committee of the RnS took part. “What Church of Jesus would ours be – said Martinez – if we did not try to start afresh from the lesson of Pentecost and, therefore, from a general return to the Holy Spirit, to his inspirations and motions? The ongoing spiritual crisis spares no one, not even the priests, to whom it is necessary to dedicate time, listening, accompaniment. They are the ones who ensure ecclesiality, diocesanism, formation for the Movement. After all, the decisive question is always the same: with what love do we love, do we repair the mistakes we have made, do we heal the wounds produced? A new love is urgently needed, therefore a new outpouring of the Spirit which is the cause of a new charismatic mission. The retreat gave answers to many questions of meaning, arousing great joy in the participants. A reason for comfort at the conclusion of the Golden Jubilee of the Renewal in Italy ”.

RnS: the national retreat for priests, deacons and religious at the conclusion of the Golden Jubilee | AgenSIR