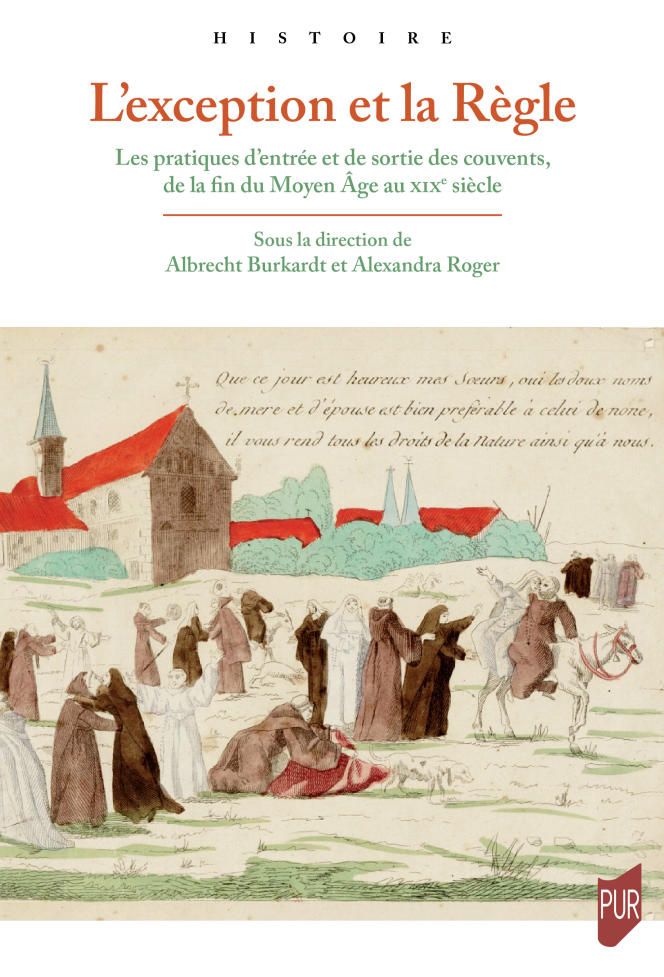 “The Exception and the Rule. The practices of entering and leaving convents, from the end of the Middle Ages to the XIXe century”, directed by Albrecht Burkardt and Alexandra Roger, PUR, 346 p., 30 €

Under the direction of Albrecht Burkardt and Alexandra Roger, some twenty historians and specialists in religion offer an overview that sheds light on the rules that governed entry and exit into religious orders, from the Middle Ages to the 19th century.e century.

In four parts, the book proposes to delve into the history of the development of these rules, the selection criteria applied by the orders and the arbitration surrounding the decisions. The book also questions our representations and invalidates the antagonism “forced entries, dreamed exits”through examples such as that of the order of the French Oratory in the 17e century, the principle of which was: “Between who can, out who wants”.

But the book also underlines the weight of external actors on the evolution of these rules throughout the period. The chapter devoted to the case of Francisca Coronel, a Portuguese nun of the XVIIe century forced by her family to enter religious orders, thus recounts the fate of many young girls of the nobility placed in the convent to allow those around them to evade the payment of a dowry in the event of marriage. FA

“The Lessons of Bethany. From theory to practice”, by Sylvaine Landrivon, Editions du Cerf, 264 p., €22

If Mary Magdalene (or Mary the Magdalene), an apostle friend of Jesus, is not a sinner, contrary to the affirmation spread by Pope Gregory the Great in the VIe century, she could well be the same character as Mary of Bethany, also a friend of Jesus. This is suggested by Catholic theologian Sylvaine Landrivon, who presented to the episcopate in 2020 through the movement “All Apostles! ».

The work of this doctor of theology rehabilitates the female entourage of Jesus, starting with Mary of Bethany (who poured precious perfume on Jesus’ feet) and her sister Martha, both direct beneficiaries of the teachings of Christ on her divine and human nature.

Read also: Article reserved for our subscribers “The promotion of women in the Catholic Church is too often exploited”

The extent of the dense, stimulating and scholarly reflections of the author relate both to Christology (science of Christ) and to ecclesiology (science of the Church): Sylvaine Landrivon advocates nothing less than the refoundation of institution, advocating for the broad integration of women within it, as Jesus did more than two thousand years ago.

You have 75.27% of this article left to read. The following is for subscribers only.