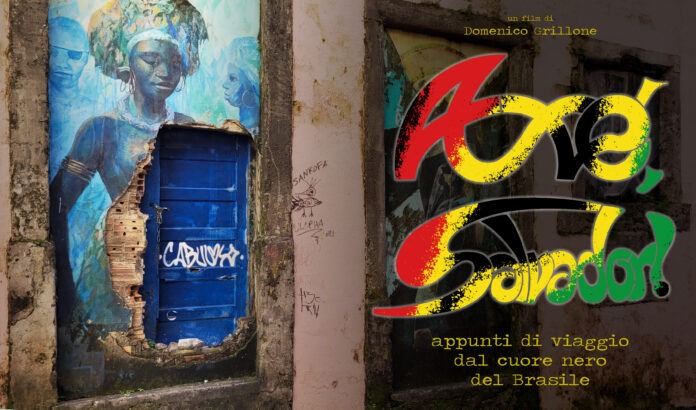 I tell the story of the charm and greatness of a joyful people but also, I lay bare a complex situation from a social point of view that of Salvador, which starts from a precise fact: 37% of the black slaves deported from Africa to the Americas were taken Brazil and most of them entered South America passing through Bahia, from its port to then be taken to the plantations scattered throughout the country. Walking through the streets of the Bahian capital, one immediately grasps that cultural but, above all, religious syncretism that has made and continues to make Bahia a truly unique city in the world”.

Among the images of hundreds of young people who live the splendid Bahia every day, the journalist films the social projects carried out thanks to the Olodum school which has made it possible to make many of these young people excellent dancers, choreographers, actors and musicians. But also, it takes us inside the art studio of Ricardo Miranda, the Lacerda lift, the Modelo market which occupies the building of the old customs house, the basilica “Senhor Bom Jesus do Bonfim”, the most revered saint of Bahia , the Museum of Modern Art of Bahia (Mam-Ba) and then, take a leap into the nature of Praia do Forte, a beach that hosts a project known throughout Brazil, “Projeto Tamar”.

“Nightlife is among the most interesting things in the capital: many young people, but also families, enjoy an ever-changing show every evening, you can breathe the true atmosphere of Salvador – concludes Grillone -. My travel notes are nothing but part of the infinite beauty of a land that I managed to capture for my people. I bring home the big heart of Bahia, the authentic one of the roots, of those who live in this magical place, where the essence of spiritual life does not lie in calling oneself a Buddhist, Christian, Candomblecist or whatever. The essence of spirituality, as a wise old man I met during one of my many walks along the seafront repeated to me, is to purify the heart, transform envy into generosity, darkness into light, selfishness into service, hatred in love. SALVADOR AX!”

Unconventional medicine, spirituality... Since Covid
Johnny Depp
'El monte', shadows and a relationship between father and son that plunges into the abyss
Tweet
Share
Share
Pin