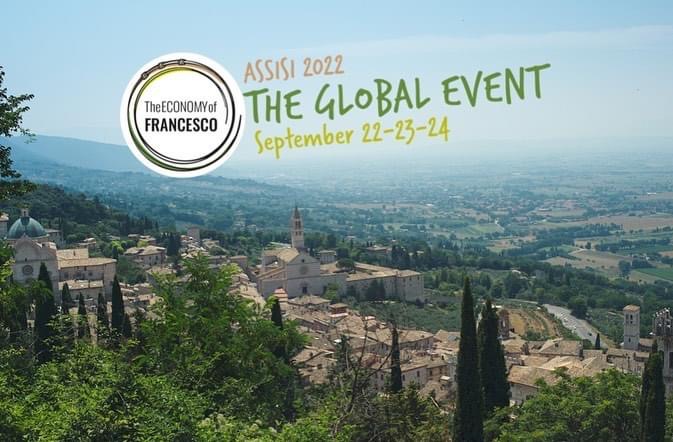 On September 24, 2022, Pope Francis went to Assisi to meet the young economists, entrepreneurs and changemakers of Economy of Francesco who came from over 100 countries around the world for the third edition of the event, the first in attendance.

Peace, care, service, protection, friendship, alliance, recognition, dignity, sharing, happiness. These are the ten words of the economy of life that young economists, entrepreneurs, changemakers have decided to embody in reality, at the invitation of Pope Francis.

Not a utopia, “because we are already building it”, concludes the “Pact” signed last September 24 in the Lirick theater in Assisi by the fourteen year old Lilly Ralyn Satidtanasarnon behalf of all participants of The Economy of Francesco (EoF)and from the same Pope francesco. A Thai teenager and the bishop of Rome are the keepers of this “jar of the future”. An amphora of paper and ink in which boys and girls have collected their personal commitments, born and matured in three years of online work sessions.

“Together with the text of the Pact, we will entrust them to the earth as the roots of the economy of tomorrow, in the rose garden of the Porziuncola, from where the sons of Francis left for the world”, he said Lourdes, one of the three conductors who took turns on the stage, on which there were about thirty peers, including the eight witnesses. Dreamers with their feet, however, firmly planted on the ground, capable of revolutionizing the world with “love, ingenuity and hands”.

How Facundo PascuttoArgentine from Lomas de Zamora, a huge satellite city of Buenos Aires which, together with the Faculty of Social Sciences, transforms neighborhood associations, trade unions, universities, cooperatives, community canteens, prison units and businesses into “small Assisi”, that is, spaces for meeting between the different social actors.

OR Henry Totin, from Benin, which, with the Javev association, has made a weed – the water hyacinth or togblé – an economic resource for the farmers of the Ouémé valley. Or again Maryamactivist for women’s rights, fled to Taliban Afghanistan thanks to the network of contacts activated by The Economy of Francesco.

It is impossible to summarize the kaleidoscope of stories and history on which the twelve points of the Pact are based. Some are brand new, such as “Francesco’s Farm”, invented by Mateusz Ciasnocha, a peasant from Northern Poland, who found a way to combine agriculture and justice precisely during the process triggered by the Pope. “How? Respecting the fields and those who work them. Now we have created a new business in Nigeria to support the family production of five villages in the Ibadan area, ”he said. Others, however, are ancient. The Community of Peace of San José de Apartadó is twenty-five years old. “It was founded on March 23, 1997 when no one was talking about the circular economy and sustainable cultivation. We didn’t know much about it either. It all happened for ‘chiripa’ ”.

Pope Francis signs the “pact” with young people: “a new economy is not utopia”