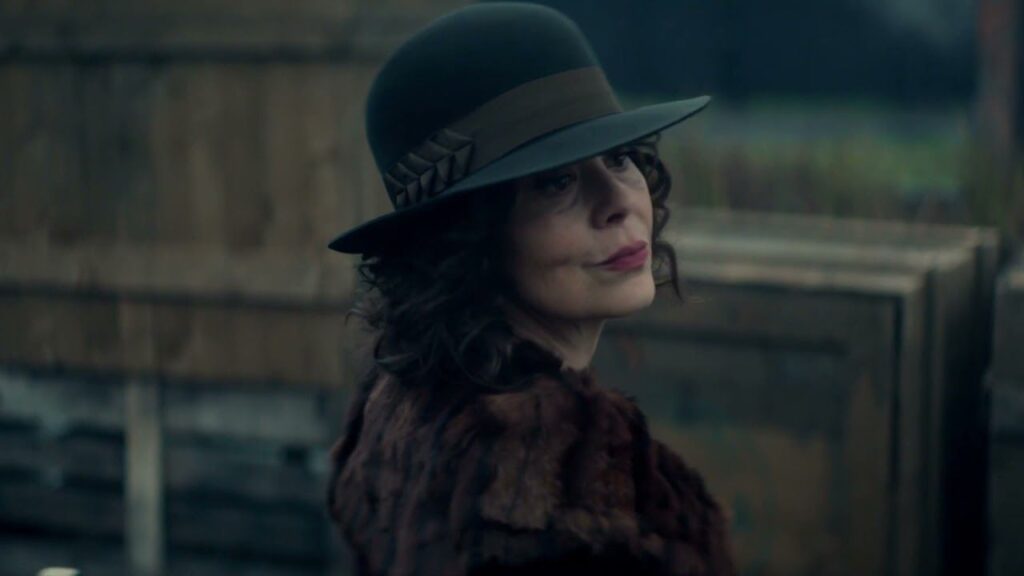 Season 6 of Peaky Blinders has the look of a funeral march. And like all funerals, it starts with a death, arrives at greetings and opens up accounts with its own inheritance.

After a long wait, augmented by the logistical problems related to the pandemic, the sixth season of Peaky Blinders has finally arrived. Following a first “canonical” distribution on the BBC, it then also reached us in Italy starting June 10 on Netflix. Before continuing with ours review (without spoiler) of Peaky Blinders Season 6 we need to make a small premise: this is not the real ending to the story of the bad boys of Birmingham. According to the creator Steven Knight, a film will be made that will close the narrative arc of the Shelby family. So, at least in theory, we are ahead of the last season of the series but we will see the Peaky Blinders again.

The whole narrative structure of Peaky Blinders season six is ​​set in the very first minutes of the first episode.
We had left Tommy Shelby walking across a field with a gun to his head and there we find him in the opening of the sixth season. We discover that behind the failed attack on Oswald Mosley is the IRA, in favor of the fascist rise in the United Kingdom. A representative of the same Irish Republican Army then contacted Tommy claiming what happened and having three bodies delivered to his home: the sniper Barney, Aberama Gold and Polly.
One of the most common questions among Peaky Blinders fans was how the creators would deal with the disappearance Helen McCory, who passed away on April 16, 2021. How Knight and the whole crew would have approached the subject, if they had to of things to somehow justify the absence of a central character like Polly. After viewing, we can only congratulate the series. On similar and sad occasions we have rarely found ourselves in front of a work of such delicacy and elegance. The whole season is a long goodbye to Helen McCory and her Polly who, while not appearing physically (except in a couple of flashbacks) is mentioned in practically every episode, becoming the invisible engine and pivotal presence of the whole series. A long and splendid funeral march that starts from those very first minutes, envelops all the characters, the dialogues and the settings and then finds a catharsis at the end. A work, from this point of view, commendable. 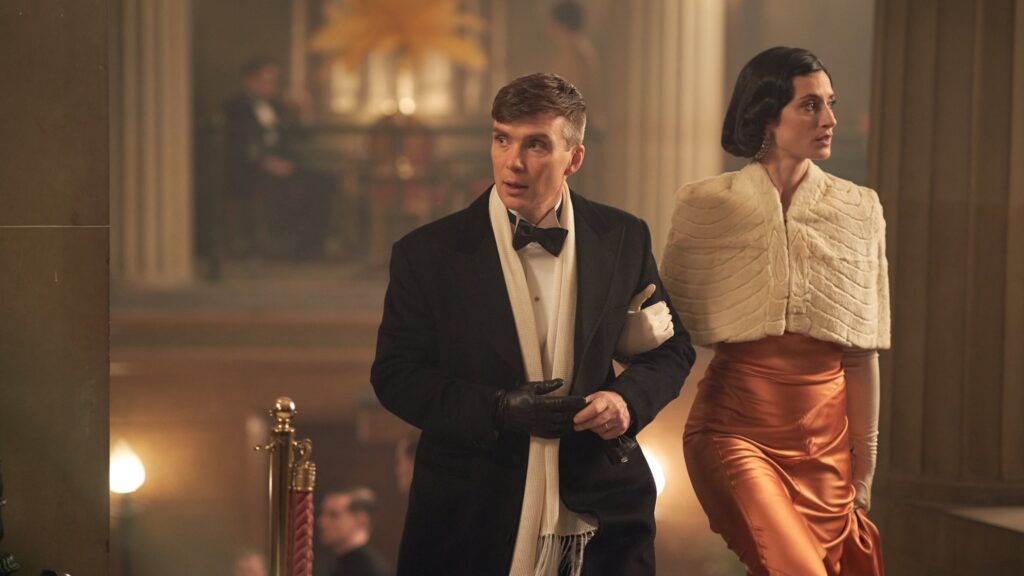 After the dialogue with the representative of the IRA, the series leaps forward four years. Tommy has quit drinking, is still in politics and maintains his ties to Mosley. At the same time he has expanded the opium trade and is preparing to expand it further by seeking his fortune on American soil, precisely in Boston. The contact is obviously that Michael who will become, as already anticipated in the previous season, an enemy and an obstacle to be reckoned with sooner or later. Polly’s son puts him in contact with his wife’s uncle. This is Jack Nelson, a character openly inspired by Joseph Kennedy Sr. (yes that Kennedy, dad of those Kennedy), a man who manages crime in Boston, close to President Roosevelt and very interested in the rise of Nazism and fascism in Europe. Much of the narrative arc of the sixth season of Peaky Blinders sees Tommy trying to infiltrate, again on behalf of Churchill, the fascist world and then relate to Nelson, Mosley with his new wife Diana Mitford and the IRA itself.
Once the season is over and we get to say goodbye, we quickly realize that not everything has worked out perfectly at the intertwining level. Although on the one hand the representation of fascism that Peaky Blinders provides is very interesting, in particular in considering it a supreme evil and superior to crime in all its forms and making one perceive the genuine fear that Tommy has towards it, there are smudges in the development. narrative. The feeling is that Knight has found it difficult to link the various sub-plots and, arriving at the end credits of the last episode, the impression is that he is facing not so much an open ending as an unfinished story. 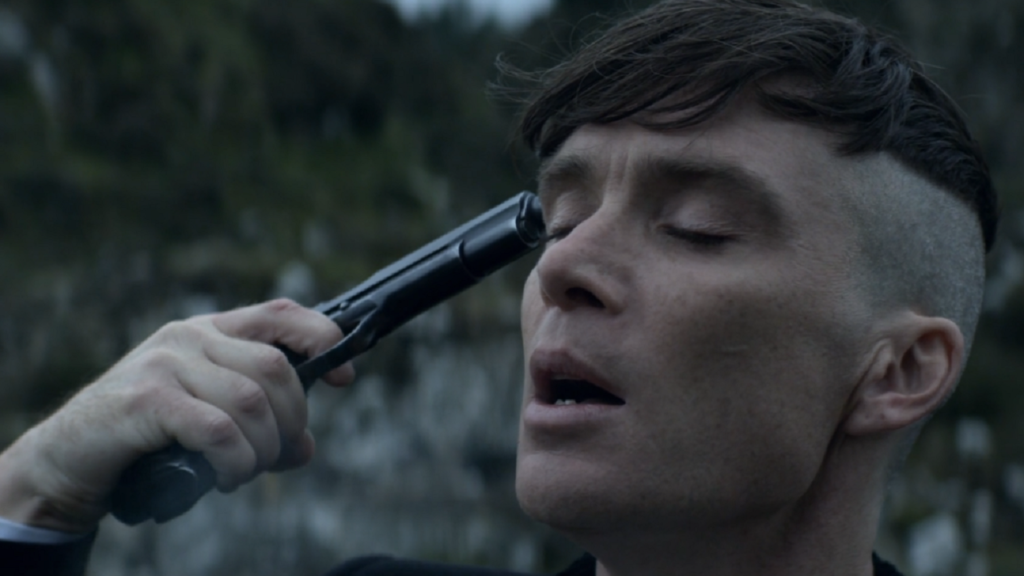 So what works in this sixth season of Peaky Blinders? Simple: everything has always worked.
The series conceived by Steven Knight has certainly not become a cult over the years for its perfect narrative mechanisms. The “story” and the intertwining of him have always been more than pretexts to be able to tell his wonderful characters, from free rein to great interpretations and to represent everything with the greatest degree of coolness possible. From all these points of view this sixth and final season is excellent. Death enters and unravels throughout the Shelby family, forcing Tommy to contend with his failure, mortality and legacy. In doing so, Cillian Murphy excels once again, grappling with yet another sumptuous interpretation of her in making her head of the family more fragile thanks to small gestures, small explosions in a general and impressive test of subtraction. The whole cast, with the exception of the terrible Finn Cole as Michael, is at the highest level and gives great moments of television in the interactions. In particular, the (not many) scenes that see Arthur (an ever-great Paul Anderson) and Tommy in dialogue are splendid in making a human cross-section even more touching and emotional than previously seen. Among the new characters, the one of Amber Anderson’s Diana Mitford, a frightening and disturbing Femme Fatale, should be noted in a positive way.
In opening the accounts with his own heritage Peaky Blinders also decides to go back to his roots, going to resume and spread like smoke all the spirituality and Gipsy traditions that Tommy himself had lost over the years. A very welcome and functional (re) addition to the overall mood of the series. Finally we close by reiterating the other great strength of Peaky Blinders, namely the aesthetic (and musical) system. Directing each episode, as well as in the fifth, we have Anthony Byrne who in this last season surpasses himself by following the letter to the letter. rule of cool. The director turns every single shot trying to obtain the greatest degree of coolness, flooding the viewer with zooms, trolleys, details, close-ups, without ever abandoning that gloomy and dark air here even more present than in past seasons. All obviously accompanied by the usual splendid soundtrack, although in no episode the historic theme song is present and only on one occasion can you hear Red Right Hand in the version of Patti Smith.

However the continuation goes and whatever the final result of the final film is, we can only thank Peaky Blinders for everything he has given us over the years. We cannot in any way forget the Shelby family and that England painted by Steven Knight. This is an inheritance that is unlikely to be collected.

Simply passionate and hungry for everything related to popular culture and art (in the literal sense of the term): comics, books, photography, TV and, of course, cinema, which is its greatest exponent and maximum expression.

Nights of France Culture
“Theater of the soul”, we start from Reggio with the show of Caravaggio's Tableaux vivants
Why do young people commit suicide?
Tweet
Share
Share
Pin