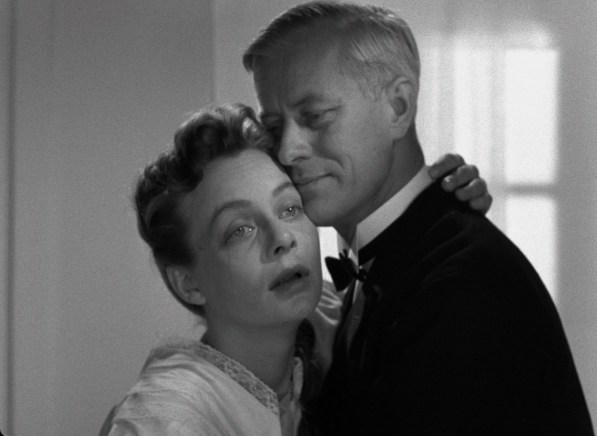 “Faith is that paradox for which interiority is more higher than exteriority.” Soren Kierkegaard

Carl Theodor Dreyer directs the eponymous play of Danish Lutheran clerical playwright and pastor, Kaj Munk, who became a national martyr after his assassination in 1944 by the Gestapo during the German occupation.

The intimate kammerspiel is a dominant of Dreyer’s film aesthetic since the 1920s that he combines with a transcendental approach expressionist. The kammerspiel is the little music room of the emotions that exacerbate the states complex psychological issues in the counting of interiority. It is characterized by asceticism, austerity of tone, a Nordic solemnity imprinted of piety, a slowness and a psychological intention heavy.

A demanding filmmaker, Carl Theodor Dreyer composes the intimate drama in stark fixed interiors, unadorned with a meticulous sobriety, a economy of means as expressed by pure emotion and true through the gestures and facial expressions of actors. In long side pans that sweep the domestic space most often, Dreyer sketches, like a painter, a gallery of portraits. The inner emotion of the actors finds a setting in the cold stylization and the austere stripping of Danish rustic interiors found inpaintings by Vilhelm Hammershoi. The chiaroscuros confront the protagonists with their pangs existential. And Dreyer’s style is ascetic to the extreme that mixes the inner drama of the kammerspiel with the expressionism of the externalization of feelings; the understatement from realism to the hyperbole of exaltation. This is this latent tension, this malaise that smolders behind the daily life of the Puritan family that the director of The Passion of Joan of Arc (1928) with the unforgettable Falconetti ardently tries to sound out.

The action takes place in Denmark in 1925, on the peninsula of Jutland, in a remote rural area, that punctuate the comings and goings of the old pater familias devotee Morten Borgen (Henrik Malberg). Within a same Lutheran religious belief, a spirit of discord pits him in a class dispute against Peter Petersen (Ejner Federspiel), self-employed tailor and dogmatic preacher, leader of a community sectarian rooted in the past and a belief doctrine of the present. The dissension is over his refusal categorical to authorize the union of the young Anders Borgen (Cay Kristiansen) to her daughter Anne (Gerda Nielsen) both that the patriarch Morten does not convert to his fundamentalist beliefs. While old Morten believes in a humanistic God embracing the stillness oflife, the village tailor is an absolutist of the Christian faith which only conceives of a deadly God rejecting the present existence for that in the beyond.

Apart from Anders, Morten has two other sons: Mikkel Borgen (Emil Han Christensen), agnostic by conviction and by lack of faith and Johannes (Preben Lerdorff Rye) that the Kierkegaard’s theology led to being a madman of God. His ramblings and ecstatic transports cause catalepsy. It’s in his trance states where he seems to be sleeping with his eyes open, which he thinks he is the contemporary reincarnation of Jesus Christ. Walled in a passion and an inner pain alienating, he will get out of it by causing a miracle: that of resuscitating Inger (Birgitte Federspiel), the woman of Mikkel, whom medical science has not been able to save of a harrowing miscarriage leaving her for dead.

In a “lazaresque” and spectral scene, Johannes raises his sister-in-law Inger from the dead. He urges him to get up from his coffin and she runs from catatonic way. The miracle is immanent, unexpected and implausible and it requires all the involvement, all the tacit spiritual commitment of the captivated spectator.

Faith can move mountains seems to tell us in substance Dreyer and the word is then made flesh bytransmutation. Inger’s resurrection scene, quintessential and rudimentary, is not meant to be a trick of cinema nor one more trickery. But well the logical result of the journey towards faith. It’s that power of simple, straightforward faith to produce results when all other inventoried means have failed. This faith, this filmmaker of abstraction, like Ingmar Bergman, dramatizes it by making it take on the form, the outline of a Christian miracle that calls for the healing of a whole family in crisis. The transformation can now take place through purity and the innocence of a child combined with the power of love.

Ordet is an almost Bressonian work in its description of grace through suffering, it is thought to the allegory of the donkey Balthazar and purity even puritanism as the morality of Christ (the diary of a country priest).

Ordet hits theaters in a new version 4K restored under the supervision of the distributor-publisher Capricci from 9 November.

Ordet – Once upon a time at the cinema