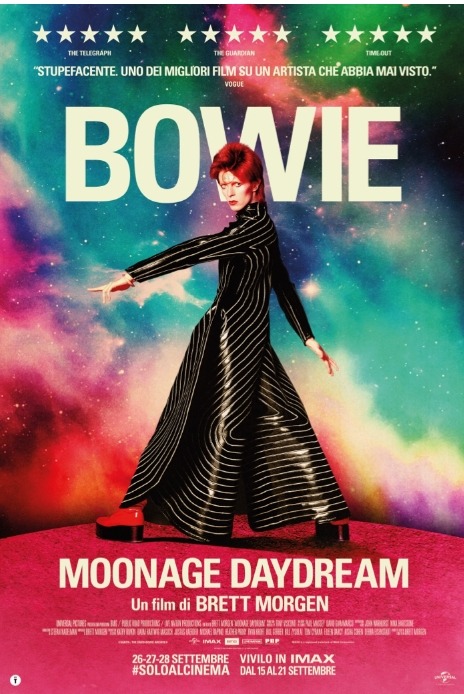 In the dense hypermedia operation put together by Brett Morgen starting from the Bowiano archive, among more than a hundred years of cinema on which he elaborates a possible reappropriation with the aesthetics of the mash-up, some fragments emerge from Permutationsthe first film made and completed by John Whitney in 1968, as a result of his computer research, which reached a point of synthesis, thanks to the collaboration with IBM and the graphic console of the model 2250, developed by Jack Citron with the GRAF interface. The attempt to Permutations was to extend the notion of expanded cinema, through the reworking of the creative gesture operated by an algorithm. Shapes, models and colors processed by specific patterns, towards the creation of a new syntactic logic disconnected from the alphabetic language. According to Whitney himself, the parallelism is with musical counterpoint and polyphony, where what is defined as a “polygraphic phenomenon” seeks a visual analogy with some harmonic architectures. Whitney’s work can be considered the one that more than others anticipates the logic and aesthetics of visuals, not only in the strictly CGI field, but also as regards the more sensory practice of VJing, as a combination of digital and physical media, especially in the ability to process information and graphic patterns in real time, according to an exquisitely performative philosophy, strictly connected to the interaction with sound, BPM and loops.

Although the combinatorial montage coordinated by Morgen himself together with his team, suggests referring to the deconstructive reading gesture or the surrealist game of corpse exquisfiltered by Bowie’s Burroughsian hangover or by the revival of all these suggestions with the deck of cards designed by Brian Eno together with Peter Schmidt, to seek affinity with the usual, worn-out reference to detournement of the Situationist International, means overestimating Morgen’s film for the wrong reasons and underestimating it without identifying other possible paths, linked to the permutations of the contemporary image.

Whitney’s computer film seemed to us a more stimulating rhizome and in some ways more archaeologically close to the logic of the remix that Morgen decided to tackle, immersing himself in the production and re-appropriation of an interrelated media heritage, Unruly and no more generic boundaries.

Net of the promotional hype wanted by Universal, we know well that there are no images never seen in the practice of shared access to the wealth of knowledge, digitalized legally or not, but queer objects that reside halfway between ephemeral space and physical experience, and that for them same nature, they can be remodeled according to logic of meaning assigned by the reference community.

If that of the hardcore fan remains hopelessly disappointed by the reduced presence of “virgin” material, or worse still by a betrayed philological chronology, it will be good to clarify that Morgen’s film gets rid of cult hysteria for at least two reasons.

The first is linked to the choice of the remix, a practice probably close to the current Bowie Estate, both in negative and positive terms. The involvement of Tony Visconti for a real work of sound design on the Bowiano heritage, compared to the recent and questionable attempts to redo the hem of some albums of the same discography, it fulfills an immersive function typical of post-cinema, which in this case removes the centrality of identity voice, to tend towards an instrumental continuum. This perspective reallocation reacts with the transitive multiplicity of hypermedia used by Morgen, reworked following the manipulation of the fragment, where on the contrary, the possible connotations are offered by the deterritorialized voice of David Bowie. Each cell of the discourse is not only modified horizontally, according to a practice that in the first instance appears similar to the cinema of discrepancy imagined by Isidore Isou and which synthesizes two worlds by mutual interference, generating a third, but above all within each card, contaminated from the aesthetics of compositing, of fusion, of the transformation of transitory motifs. On the one hand, the dizzying hypertrophy of fragments between art, life and fictional gesture, such as the segment that revolves around one of the sequences invented by Jacopetti and Prosperi for Dog World 2, where Horst Sonnering, a German painter dressed as a minotaur, rod violent lumps of color on a canvas, while the demonic set suggests the immersion of the creative act to best perform a commission linked to the illustrated edition of Dante’s Inferno. On the other hand, the cancellation of one image in the other in the segments, for example, originally used for the rear projections of the Sound & Vision Tour, where the excess of Louise Lecavalieris cut almost entirely, to encourage new interactions and unpublished samples of the original material, subjected to the remediation between screens.

The second reason is the deliberate attempt at historical decontextualization of the material, through the equitemporal choices of the narrator. Morgen introduces the film with a reflection on the notion of time, from a perspective that could belong to the atheist science fiction writer Michael John Moorcockas to the orthodox mathematician and mystic Pavel Aleksandrovič Florensky. The outline is that of a search for the Self as a progressive cancellation of the meaning in the relationship between the energy of the subject and that of the cosmos. Opera world, the one imagined by Morgen, but in the way in which this is filtered through the digitization of experience. Conceived as a show for equipped rooms IMAXthe film clearly tends towards the semanticization of an immersive bubble where aural and visual continually exchange position, in the shock of the assault. We saw it in one of the four Italian cinemas arranged for this type of vision and it seemed to us a strange celibate machine, like all technologies without the future of Cinema, yet it lives in an attempt to show elsewhere in a secluded space, with popular access. , a short circuit that runs through all Bowiane creations.

Yet, in the apparent linearity of a never reconciled spirituality, the historical decontextualization works precisely as a deactivator of some mythologies, even simply authorial ones, placing in the background the eternal repetition of the “decrepit cabaret” pop, as if it were a signal transmitted by a broadcaster always and in any case elsewhere. While everything flows like an illusion of the mind difficult to grasp for quantity and density, as long as he lets himself go to the “how” of the fragments and not to the “what”, Bowie escapes his own characters, not only in the form of the novelist, but in a definition of fragility that fortunately weakens the dramatic tension of any documentary reconstruction, almost always an authoritarian mirror of the historical eye in charge.

The interviews already seen, the one in the study of Dick Cavettthe couple led by an intolerable Russel Hartythe 1983 conversation with Susan Sarandon and an equally intimate one with Mavis Nicholson broadcast on Thames television in February 1979, they serve Morgen to identify an emotional breach in the narrative, which qualitatively pre-exists in the fragment, as a trace that exceeds the asphyxiated authority of chronological reconstruction.

In the infernal magma thrown against the spectator, an alternative light makes its way, revealing that interaction between reality and simulacral representation as part of a creative process activated from time to time by the perceptive activity of the spectator. This Bakhtinian definition of the authorial point of view, neither completely outside nor totally immersed in the fictional realm, in Morgen’s film seems to push towards the thinning of any intermediation that is not that of an intimate and confidential authorship, indicated by the passage of the human in an unspeakable dimension. The multiplication of the narrating self, even when Bowie is presumed to take off his masks, is constantly thrown back into abyss, just think of the segment that concerns his marital history with Iman, immediately threatened by the reconfiguration of chaos in the shared sensorete. Against this background, there is an evident iconoclasm, assigned to the discourse that one wants to construct with the voice and with the sounds.
If the IMAX system aims to pursue a performative quality of hypermedia elements, subjected to forms of real plagiarism, to arouse a sensorial effect closer to the collective experience of clubbing than to Guy Debord, at the same time the search for cohesion narrative, constructed in an oblique way through the confessional form of the interview and other semantics taken from the characters played by Bowie as an actor, seeks to orient the chaotic quality of the materials, with a spiritual tension that by definition poses itself as an anti-narrative, denying the beginning and end of the warp.

The daydream seen from the moon then takes on the fleeting consistency of that peak of brain activity that can manifest itself just before dying, as a stream of consciousness condensed and recombined from another dimension. A travelogue similar to the Bowiano one in Singapore that emerges as a central element in the film, with images shot by Gerry Troyna for Ricochetthe 1984 documentary, to which Morgen assigns the task of narrating a rite of passage.

Here is that live performance, documentarism, historical-biographical research, diary collide towards an ineffable form that does not always keep what it promises, but which Bowie would probably have liked, so refractory to the parodic mimicry of homage.