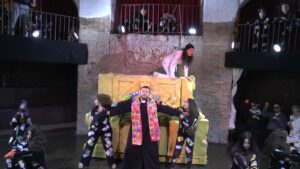 located in Vico del Fico in Arco di Napoli under the direction of Gianni Sallustro.

A Talentum Production production in collaboration with the Academy
Vesuviana of the Theater and Cinema of Ottaviano directed by Gianni Sallustro.

The show loosely based on Bertold Brecht’s 1939 masterpiece Mother
Courage and his children was nominated for the 2014 Ubu Prize.

Mater Camorra is dedicated to over 1000 innocent victims of the Camorra, in
particular to Gaetano Montanino victim of duty in the exercise of his work.

The show is a -j’accuse- aimed at those who make malfeasance their only reason for living
putting the God of money before feelings and ethics.

The text speaks of a courageous mother and the difficulties she has to face with her work as a sutler
along with his three children to try to survive.

The mother, a shrewd and cunning woman, is both victim and perpetrator in her moral impenetrability
who immolates his three sons on the altar of the God of money.

The various characters on stage are inexorably corrupted by violence, death and rapacity are inevitable
constant in the war in which they are immersed,

because war irremediably leads to inhumanity and the denial of any ethical value.

The director relies on a scenography with very few and meager elements (Mother’s trading cart
Courage) ,

emphasizing the intense physicality of the very young actors on stage who act unanimously in this very current and prophetic context.

To the talented youngsters the task of representing the sprawling grip of the underworld which transforms now into an insatiable pack of dogs, now into irreverent monkeys, now into
slithering snakes, now hungry wolves, now mischievous birds.

Gianni Sallustro’s Theater was born from the need to lead the spectator to think, to look beyond a single approved thought, giving the theatrical space the task of forming
ethically young people who approach it.

Giving the Theater a social vision deprives it of its mystical and formalist aura, preferring a visceral and direct relationship with the audience in the room, stimulating an emotional reaction and profound reflection,
shaking slumbering consciences.

Mater Camorra is apocalyptic, visionary, at times disturbing, but not without hope in the finale with the cry of -stop-, full of directorial, scenographic, sound inventions,

wise in suggesting horror, it is an alarming metaphor on the abomination of the society in which we live and a reflection
criticism of the consequences of its undoing.

The actress Nicla Tirozzi (Anna a squarciona) effectively personifies the sacredness of motherhood,

the actor director Gianni Sallustro (the chaplain or the snake) well represents the ambiguity of the Church impoverished in its spirituality.

To be seen especially in schools.